When reading about traditional Chinese medicine, one of the first concepts you learn is the concept of appropriate application. A particular herb may be good for alleviating one ailment, but hazardous to another. That particular herb may be the necessary remedy, but if taken at the wrong time or without proper application its effect may be nullified. So, it's not just ailment and cure, but the application which incorporates a lot of sensitive issues such as timing and dosage. I use the specific example of traditional Chinese medicine here, but I don't know traditional Chinese medicine very well. What I do know, and what is relevant to me, is the healing or distorting effects of the various stimuli I incorporate into my life. In this case, it's the media like images, music, books, television and movies I expose myself to.

This fall was a chaotic time for me where I felt buried by the amount of everything around me and the lack of resources with which I had to dissolve them, or at least I thought. What seems to have been ideal  in retrospect was a calming of my anxieties and a clear vision in order to untangle all of the complexities that were consuming my mind. Perhaps the most beneficial media would be of the sort that would act as an agent to encourage the discipline to stick to a healthy and conserving routine. To this end I was listening to ambient music, drinking tea, going to bed early, and reading books about the things that usually calm and interest me. In my daily life, I tried to spend only the bare minimum needed to survive. But it didn't work. It was too quiet and wasn't real. So when I decided to act otherwise, I would blast out on the opposite end of the spectrum. I would abandon all previous thoughts of healthy conservation and plow forward with luxurious desires fueled by heavy metal and my favorite expensive beer. This felt powerful, but I would only wake up deeper in the hole.

All of those individual aspects are perfect with the right application and moderation, but I wasn't adhering to such ideals with success. Traditional Chinese medicine seeks to restore balance by counteracting excess and depletion. I was in a very hot summer of sorts and sought balance, but the cooling remedies I attempted were too severe. Then I took heating agents which ended up taking me to boiling point. These are matters I feel I should handle myself, so in a sense I am my own life-doctor, choosing which stimuli I should imbibe. I believe this touches on another important concept in traditional Chinese medicine; a self-sufficient and preventative approach to finding one's balance, as opposed to going to an outside source receiving temporary remedies for ailments that have already matured. I was not a good doctor to myself.

However, the other night I watched a movie that was just what my internal doctor should have known to prescribe: "Chonmage Preen." 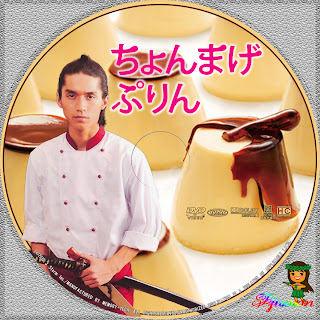 Harking back to my original curiousity of Japanese bushido and samurai. I picked up this interesting movie which reinvigorated the kind of feelings inside of me that can successfully battle those antagonists that have so recently devoured my health. (Chonmage is the traditional hairstyle worn by samurai. Preen is a custard dessert.)

It's a story about a samurai named, Yasube, who somehow finds himself time traveling forward to modern Tokyo where he becomes entangled in the life of a single mother and her 5 year old son. In his free time adjusting to his new life, Yasube watches cooking shows on TV and becomes a skilled patissiere. However, he abruptly finds himself sinking back into time from whence he came.

For such a cliche story, I really enjoyed it. Certainly not the heavy nature you usually expect from samurai films, but it still displayed the ethics and code of conduct a samurai is expected to posses. This is the kind of influence that I've been needing.

What I absorbed from this movie were the notions of discipline so often attributed to samurai, yet adopted to modern times. A samurai he still was, but one that couldn't use his sword or social status to achieve his aims. What was distilled were the old values applied to modern scenarios.

One of the first interesting differences you see in the movie are in the ways of speech. Yasube introduces himself to people and speaks in an old dialect, which is a comedic point in the film. But this also reveals interesting notions of our modern use of speech. Japanese is particularly interesting in that people use different words and modes of speech depending on their social status. Keigo is a special form of languge in Japanese used to distinguish social status and dilineate respect. It is used commonly today; clerks will use keigo when talking with customers, and Japanese will use keigo with superiors in office settings or formal situations. But for most conversation, it's viewed as strange. Yasube uses keigo with everyone, which is strange in modern situations, but it shows a respect for others, and the ability to subvert one's own bias in order to make a stiuation as "appropriate" as possible. Ideas of "appropriate" behavior are often viewed negatively by Westerners because it connotates submission; an enemy of the so highly valued freedom-of-expression we cherish in our individualistic culture. But this is where misinterpretations of samurai and even Japanese culture often occur. Many people believe it needs to be one extreme or another. For example, some may believe being "appropriate" in Japan means using the most polite language to everyone and bowing with every word, but this is strange and not Japanese. Or perhaps being a samurai means expecting enemies around every corner and treating every aspect of the world as battlefield to consume foes in the name of one's lord, but I think there is a lot more to samurai than that kind of thinking. Japanese culture and samurai are more about appropriate application. In some situations it is appropriate to voice your opinion, and in others it is appropriate to subvert your feelings for what's best for the group and environment.

I mentioned that the samurai in the movie often used keigo and old dialects with people in the movie to show respect, but there are also scenes where he abondons this and scolds others using abrasive and harsh language. When he does so, it is terrifying and effective. The samurai is not necesarily brought to anger, but utilizes such language to achieve a specific means. In the cases of scolding others, he is attempting to affect someone's behavior to change for the better. Again, appropriate action directed to a specific end; one that necessarily benefits others.

Adaptation was another theme throughout the film. Though the samurai was transported to another time altogether, Yasube found an application for his skills. Perhaps he was a naturally gifted patisiiere, but that is irrelevant. What the movie exemplified was the application of his skills that were born in bushido to cooking. He followed recipes exactly as they were given, he made every effort to be as clean and precise as possible, and he put all of his concentration and effort into the particular dishes he was making. In this way, he found great success making pastries. If one applies these efforts to their endeavors as Yasube did, perhaps our abilities could extend much farther than what we commonly believe. To me this is incredibly liberating. What matters more than your natural gifts or limitations is your conviction to do something the best you can. If you have the discipline to apply your effort without distraction, and be able to do so intelligently as possible, you can do amazing things. Cleanliness, focus, patience, perseverence; finally these ideals found reality and relevance when I watched this film. 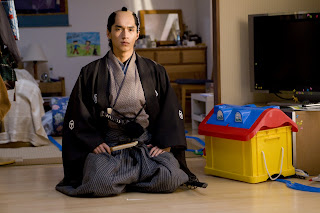 However, there is much more to life than these isolated abstractions. There are these specific ideals of the samurai, but they are not necessarily the desired goal, and certainly not the whole picture.

I believe samurai were not perfect, but rather people just like you and me and everyobody else. I imagine they had just as many worldly issues in the way of their dreams as we do. They need to breathe, sleep, eat, take care of family issues, struggle with society, and deal with sickness and death. The difference is that a samurai, regardless of their bodily or situational limitations, would adhere religiously to the pursuit of perfection.
With this intent, the illusory clouds of fear that have gathered inside of me are cast out, and I reclaim the center. No matter my limitations nor the propensity of my adversity, I can engage the demons of my life with the most powerful of patience and skill. Holding to that base, the outcome, which is me engaged with the realities of life, is the pinnacle of beauty. With that, I am invincible. Death is nothing but a stone on the path.

One last comment I thought of separately, but seems incredibely relevant, runs as such:

To find perfection in the moment, a peace and patience that envelopes the whole of the universe containing all of your small fears and squabbles inside, is to find happiness.

To string every now-moment together perfectly with the following consecutive now-moments, is great.

To make a goal and connect all of the consecutive now-moments together to collectively and intelligently build towards your goal successfully, is to be a great human being.

This is what I want to do.
The samurai ethics are not superior to any others, but they are appropriate for me today, and so that is my path. 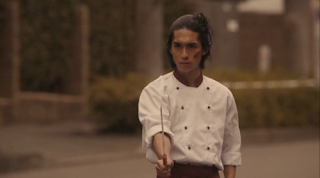 Oh yeah, Happy Holidays! Tomorrow I fly to my childhood nest in the northwest corner of the greater U.S. Perhaps I'll find a few dojo rats there ...
Posted by Zacky Chan at 5:48 PM