Talking With My Iai Sensei: Difference between "Jutsu" and "Do" 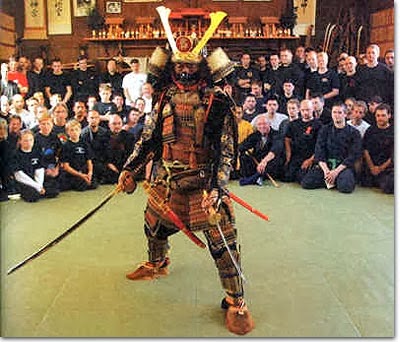 This is a word I use more than any other in my blog. It's what I believe it is that I'm doing when I practice various disparate arts. It's the connection between everything. It's the reason. It's what I seek.

I feel like it is the best word to describe what I do, and yet I've only rarely heard it used by Japanese people. The few times it has been used, I think it was used directly for me because my interest is in the specific term of "budo," whatever that really means.

I think the topic has come up more with iai than any of the other arts I've practiced.

Perhaps the biggest reason is just myself: I deem it an important part of my practice and life, so I use it more and make it more relevant, though others may not think so.

I use the word "budo" because I'm looking for the connections between lots of different arts, many of which are practiced by my iai sensei, and I think he must have the same thoughts as me.

When I first joined the class and sensei asked me why, I said it was because I had an interest in budo.

When I say this, it is very clear to me, and is certainly a specific term in Japanese, but do we really know what we're talking about?

There are a lot of words Japanese people skillfully avoid saying. Usually they are words that specify a subject, which is usually averted. This can be in the simple words of, "I" and "you". I think the term budo is avoided on purpose often, because people shy away from using a word they aren't completely sure of.

Does anybody really know what budo is?

Sensei helped clarify this the other day. I'm not sure how the conversation got started, but the important part went something like this:

"What we are practicing are various types of jutsu (technique [not necessarily including the "-do" part of martial arts, and budo])". Sensei looked up at the scrolls on the wall that have all of the techniques of the various arts he teaches. "All of these jutsu have been used and cultivated since hundreds of years ago, and they are a kind of treasure. Because we're lucky enough to have these techniques passed down to us, I think we should practice them and pass them on. But this isn't necessarily the "do" that is connected to various arts like iai-do, karate-do, ju-do, etc. As the arts left the battlefield, they have very little practical application today. We have no reason to carry swords or bows and arrows or settle arguments by punching and kicking. Instead, it was decided that we should practice these arts for self-cultivation, and we call that -do, as opposed to just -jutsu which is bare technique. But what we are training here is jutsu.

"Budo is a very difficult thing to describe. Though I've been practicing these arts for decades, I don't think I can describe it very well. I think it's something that at the very end, if you can find some kind of definition for budo for yourself, you can be happy. What we do here is practice these jutsu techniques. After a while, perhaps it seeps into our daily life naturally. Maybe that is budo.

"Perhaps budo is the way of living.

Budo is the way of being human."

This has been ringing inside of me for the week that has passed since we had this discussion.

I don't need to practice swinging a sword. Perhaps it's good to carry on the tradition. By swinging the sword we can perhaps learn valuable lessons of being human.

Budo is not a cheap term to throw around. It is also not a magic term that I should substitute for what I'm really trying to say.

I shouldn't substitue budo for what I really want to do.

There is a big discussion about the difference between mindless jutsu and soulful do. I think the popular trend is to follow the latter while condemning blind techniques. I believe in this as well. However, to ignore the jutsu while that is specifically what we are doing because of some elated ideal of "the Way" ... I think we're being lazy, overconfident, and self righteous. We should be honest with ourselves and our practice and each other.

In the end the jutsu is what we're doing but it's not really a big deal.

Learning to be human ...