The other night after I had gotten back from the Aikido seminar, I turned on my phone and realized I had missed two phone calls from Nishijima Sensei. Nishijima Sensei was a PE teacher at Sakurai High School (school I teach at), but was sent to another school in the area (which happens every 5 to 10 years usually for teachers in Japan). He was one of the first people I met, and one of my favorites. He was no average PE teacher, but used to wrestle professionally and was one win away from representing Japan in the summer olympics. When he worked at Sakurai, we would talk everyday, and we had built a strong relationship. It had been a while since we talked, so I knew his calls were about something important.
To be honest, I was a little hesitant to call and get caught up with something because I just wanted to relax and clean my apartment. But of course, I returned the call. He picked up and told me that he had someone he wanted me to meet; a tea man. Because it was a little late on Sunday night, he hung up the phone to see if this meeting could take place. I was very surprised with which the urgency Nishijima Sensei spoke, and thought it must be really important. He called back assuring me it was OK, and I was on the next train to his town of Namerikawa about 20 minutes away on train.
On the train I thought about how nice it would be to relax and go to bed early. I had no idea what I was getting myself into going across the region to talk with a tea man. But I have a great interest in Japanese tea ceremony, and realized that everytime I keep my eyes open for something unexpected I am approached by amazing surprises, and when I go to sleep early I usually miss them. I was trying to imagine what this man would look like. My image was of a slight man, peaceful, but very calm, composed, disciplined ... perhaps a little strict. I was worried about what I had worn, and the effect of my limited Japanese. But oh well, I was on my way.
Nishijima Sensei picked me up from the station and we headed to his house towards the mountains. We got out into the hot summer air, and walked over to his friends' house where the tea man was staying.
I walked into the house into a whirlwind of small kids yelling and playing with toys to their heart's extent. I met Nishijima Sensei's wife, and son who is 2 years old, and two other couples with kids who were having dinner. I met them, and Nishijima Sensei told me to sit and wait for a few moments. I played around with the kids and talked casually with the other adults, and then a man walked in.
He was built like an absolute solid stump or wine barrel and had a completely bald head that wrinkled as it met his neck in the back, and a long grey/black goatee protruding from his chin. His build was so particular, but I don't really know what name to give it. Perhaps an appropriate image comes to mind of Oddjob from James Bond. But he was about 5'5", wore traditional summer clothing, and had a great peaceful emminence about him.
Nishijima Sensei said "This is Tame-san, the tea man." When we shook hands, he had a very gentle grip and gave a very nice "nice to meet you" in English, while making eye contact the whole time. He did not fit my previous image at all. He walked away to take care of something, and Nishijima Sensei started spraying bug repellent on my bare arms. He then said, "It's time, let's go" and we walked outside into the night air, Nishijima Sensei, Tame-san, and I. We walked to the front of the drive way where there was a small tea room made of wood. I couldn't believe this house had a tea room in front just like that, and entered through the characteristically very small entrance inside. 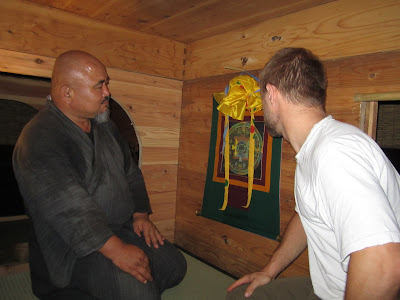 This tea room was very clearly hand made recently, and I mean this in the best of ways. It had all the necessary parts to a tea room, like the very small tea room itself with a tatami mat, a tokonoma, which is a space for pieces of art, which in this case was a small lantern, a vase with a flower, and a strange unopened scroll. Also there was a very interesting window that was circular in shape with wooden designs in it representing a rising/setting sun with clouds, and water at the bottom. Then there was the small area where tea was prepared, with the needed tools and pot to boil water. That is where Tame-san sat while Nishijima Sensei and I sat in the guest tea room.
I was trying to think of something interesting to say about the room or tea ceremony, but Tame-san wasted no time (though certainly not rushed) and began talking. He started talking about the dichotomy humans create between "correct" and "incorrect" ( tadashii and tadashikunai). Society deems things correct or incorrect, right and wrong, good and bad, but there are two drawbacks to this categorization. First, it can be very aversive. People who are subjected to this phenomenon of "right" and "wrong" since birth have little choice but to follow suit until they realize that they do not have to believe in such a system, and decide to follow something else. People are initiatlly unnecessarily chained to this concept, and it's effects run the gamut of undesirable conditions. Secondly, Society's concept of "correct" and "incorrect" is only applicable to the agent that decides it. This concept is inherently arbitrary and subjective, thus not accurate to all. Tame-san brought up the question of what we should do when we confront something that is "incorrect" or "wrong" or "bad". Well, he smiled and said we should do nothing. If a thief wants to steal, then let him steal. Say "OK! Here you go!", and then Tame-san laughed some more. Tame-san commented on how dangerous and unfair it is to subject people to a rule system without asking if that's what they want to do. Or reprimanding people without giving explanations of why. We must learn for ourselves. We are experiencing our own particular individual reality and life. That is most beautiful. This is the purpose of Japanese disciplines and art forms, and of life: to learn for ourselves.
Certainly this is a complicated subject with no one answer, but here I hope to represent Tame-san's character (though of course, the conversation was in Japanese so my explanations are solely based on my limited undersanding ... nanto naku). After this first conversation, I've never experienced someone like Tame-san before. I've seen so many videos, and read so many books about these characters who seem to genuinely embrace Zen philosophies. He looked you in the eyes honestly and squarely, he listened when someone spoke, spoke with a softness, and laughed from his belly uncontrollably. I couldn't believe the person I was sitting in front of. This is the center of much of my interest in Japan. I'm so elated that he wasn't the strict image I had before.
Tame-san soon explained his current situation. He travels around, serving tea in society in his personal expression of cha no yu (freestyle as opposed to the strict discipline of other formalized tea schools of sado like omotoseneke and urasenke which he was apart of for many years before). Most of the time, he sleeps in the woods. He said that when he "goes home" to the woods after being away, he says tadaima ("I'm home") by howling to all the animals. At that point, he demonstrated his howl before Nishijima Sensei and I, which was as honest as could be. It was extremely loud and went on much longer than 99% of people would ever try to demonstrate a howl. Perhaps 99% of people would be very embarrassed or uncomfortable doing such a thing in front of a stranger (including me) but not Tame-san.
Do you think he's crazy?

All the while through these conversations, Tame-san had been preparing some tea for us. This is the way his tea ceremony goes. A small group sits together, talks, or doesn't talk as it comes naturally while he prepares tea, and then we drink it together. This is starkly different that the official disciplines of tea where every movement is preordained and abided by. I completely forgot what the name for the tea he served was called, but it certainly wasn't regular green tea most people are accustomed to drinking, and it was different from matcha, which is what I usually assumed was used in tea ceremony. He served us a couple different kinds of tea. All of which had the most wonderful quality I have ever tasted. Here is no place to go over the movements and happenings of all tea ceremony, but in this case, he would make the tea, pour a small amount into a bowl (which he made), and I would drink a few sips, and then pass it to Nishijima Sensei. One should empty onself so as to fully experience the tea. When I took a small sip, the warm and full flavor seemed to envelop the inside my mouth (is that possible?). Tame-san said after he takes a sip, the whole world through his eyes change, and gave a look as if it had been mushroom tea instead of green tea. This is a man searching for honesty. To him, it comes in a natural and informal fashion, peacefully and best expressed in joy.
I asked some questions about his past, and how he maintains such a lifestyle, but to be honest I don't remember exactly the answers he gave, and I didn't ask every possible question about such things. Instead, we enjoyed each other's company, having the experience we were having. 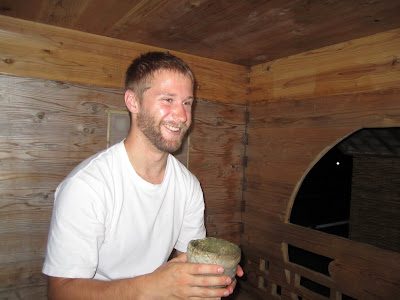 One important detail that I asked was, "Where do you sleep? Do you have a tent?" He answered, "I sleep right there." And pointed to where I was sitting. We were all a bit confused.
"I drive to where I want to sleep, park the truck, and sleep right there on that tatami mat."
"This is built on a truck." He began laughing roarously.
WHAT!?!?!?!?
I took a good look around to realize that, this tea room Tame-san had built was on the bed of a truck. 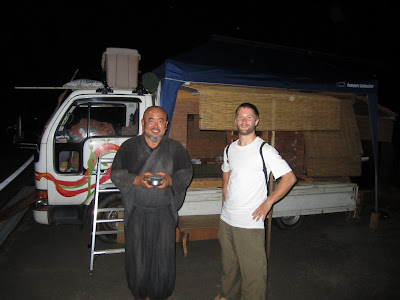 !!!
I don't care if he's enlightened, or crazy, or what. But that is the coolest thing I have ever seen.
Hey Dojo Rat! How about a traveling saloon???
Tame-san and Nishijima Sensei's friend came to join us, and we talked about the things Tame-san had in his truck, as well as other strange Zen philosophies. I couldn't believe this grouping of people. Tame-san, this stout bearded zen traveling tea man. Nishijima-Sensei, a very small but incredibly cut professional wrestler from Tokyo who looked more military than anything else and who was now a high school PE teacher in small-town Toyama. Their friend who looked more like a slightly built geeky science teacher. And then me, a strange blonde gaijin. All of us united, talking and laughing. All kindred spirits. All with our each distinct manifestation of the same desire for an interesting happiness.
When I returned home on the train, I've never felt more unsure if I was dreaming or not. This is one of the strangest experiences I have ever had.
I have a book recommendation for anyone interested in Japanese tea ceremony and Japanese culture. In fact, of all the wide variety of books I have read about Japanese culture, this is number one:
"the Book of Tea" by Kakuzo Okakura.
Posted by Zacky Chan at 3:04 PM