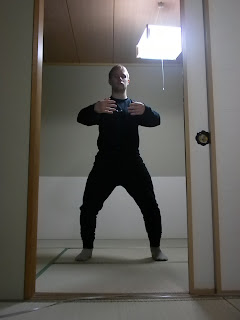 Among the wide variety of meditations practiced in the World today, “Standing Meditation”, most often attributed to the Taoist tradition, is arguable the best way to practice the “the Middle Way” for quite a few reasons.

“The Middle Way” may be one of the most important ideals of the Buddhist tradition. After many years of studying with Hindu ascetics, Siddhartha Gautama eventually came upon his own realization that enlightenment comes not from complete abstention or excess, but from practicing “the Middle Way”, and thus began formulating his teachings upon this principle.

Though not solely a Buddhist or Taoist follower, Master Masahisa Goi, founder of The World Peace Prayer Society in Japan in 1955, has many interesting concepts familiar to the ideologies of Buddhism and Taoism that are relevant to this discussion. In his book, “God and Man”, Goi’s discussion primarily focus upon his belief in karma; more specifically, how to diffuse negative karma. Here I will quote Goi, and present my own interpretations:

What I gleaned from this passage was that, in our lives we may have certain realizations and life-changing thoughts, however, this does not necessarily mean that our lives will begin following those ideals. It is easy to have such magnanimous thoughts, and yet, putting them to practice can be a completely different matter.

Much of Goi’s belief relies upon the concept of our own karma, which resides in what we may call our subconscious, and here he is explaining the process of how our thoughts and actions manifest from our karma. Our thoughts are the first intelligible signs of our karma, and are truly manifested in our actions. Perhaps a person “remembering” their thoughts, is that interplay between thoughts and actions stemming from their karmic unconscious.

Now, what does this have to do with standing meditation?! Well, with standing meditation, we have a still-form of meditation practiced while training the body. Mental meditation in tandem with physical training. In this practice, we have a direct relationship between the experience of the body and mind together in one practice; each acting as a timer of sorts to the other. While standing, as our mind attaches to a certain thought, perhaps our patience for remaining still wanes, and one’s knees begin to ache or shoulders begin to shake. However, if one’s body is acclimatized to the training, or one’s mind is able to maintain an empty state, standing for long periods of time becomes easy, or even, effortless. I believe this practice to be a healthy and substantial training for both the body and the mind. At worst, boredom or unsteady legs end the practice.

Though one may soar the cosmos in sitting meditation, sometimes such realizations do not reach the physical realm so efficiently, as well as those straining physically for the majority of the day without a thought to its spiritual or psychological bearing. In all practices that one devotes one’s whole self to, I believe there can be substantial experience gained; and I will not argue that an adept in the field of sitting meditation or amazing physical feats cannot reach their full potential of growth. But, I will argue, that standing meditation is the most appropriate practice for the Middle Way as both the mind and body are able to check and legitimize each other every non-step of the the way.
Posted by Zacky Chan at 10:26 PM