This weekend we had an aikido gasshuku, which could be translated as seminar, but also intonates an overnight stay with the people at the seminar. The location was Joetsu, in Niigata prefecture about and hour and a half drive north of Kurobe. The group from our dojo numbered at 18 and we all carpooled to the spot. I was lucky enough to ride in the same car as Sensei, one other skilled black belt, and one of the only other students who started after me.
Interestingly enough, Sensei is a Buddhist priest. Writing this, I think the image foreigners usually have of most Buddhist priests can be very different than most of the priests in Japan. Think less, a monk with a shaved head meditating in the snow. I can't explain exactly what being a Buddhist priest in Japan really means, because I don't really know. But I can tell you that my Sensei is someone who also runs an Aikido dojo and appears to lead a normal life. Temples are not just found on top of mystical mountains in the forest, but 98% more often found in towns and cities in Japan. I have no idea how many temples are even in Kurobe, but a lot more than I know about. At the high school I teach at, the Social Studies teacher is also a Buddhist priest. My Sensei and the high school Social Studies teacher both work very hard, have lives other than chanting sutras, and I have seen them both incredibly drunk. I think much of Sensei's work as a Buddhist surrounds maintaining the temple, holding events, and fulfilling requests for people. But to be honest, I really don't know.
Anyway, the three of us picked up Sensei at his house in Nyuzen, and I was really impressed by his temple. He met us in traditional summer clothing which was silver (think kimono-esque, but much lighter in weight, less fancy, and shorter sleeves and pants), traditional geta sandals, and some really stylish shades, making him look more yakuza (Japanese gangster) than small town Buddhist priest. With my beard and sunglasses, I think we caught more looks than usual.
During the ride, I asked Sensei many questions about aikido, but understood little of the answers.
When we got to the Joetsu dojo, I was surprised to find only four people training who belonged to the dojo. One white belt, two black belts, and their Sensei. It was the first time the two groups had trained together, so there was a bit of getting used to each others' ways on both sides. In martial arts, communicating with other practitioners is something truly necessary though it can sometimes be uncomfortable. The Joetsu Sensei welcomed us and led us through warm-ups, but the teaching of techniques was given by our Sensei, which I didn't expect. However it was certainly appropriate. The Joetsu Sensei was a 3rd dan (3rd degree black belt) and looked around 30 years old, and our Sensei is a 6th dan and I think 54.
Over the spectrum of Japanese martial arts, the belt system and it's effects are often heavily debated. At this seminar, I was able to have my own experience seeing the differences between degrees of black belts. First of all, having a black belt (at least in Aikido) is by no means a sign of mastery, but a beginning of becoming a true practitioner. To me, it seems to have a black belt means you know the techniques of the curriculum and can execute them at a satisfactory level, can take the falls required of the techniques safely, and have a good sense of what your style of martial arts is. There are quite a few 3rd dans at our dojo, and to me, these people have a great amount of experience in aikido, exhibit effectively the qualities of aikido, understand many different aspects of approaching techniques, and effectively execute the techniques. If I'm not training with Sensei directly in class and instead with one of the 3rd dans, I am still learning from great great aikidoka. But next to a 6th dan, you can really feel big differences. My Sensei as a 6th dan seems to have the techniques more deeply ingrained in his bones. Every movement seems to exhibit qualities of Aikido. To move with Sensei is a completely different feel. He seems to just do the technique, which can be hard for beginners to see and understand in attempting to make the connection between not doing and doing a technique sometimes. My appreciation for the skills and attitudes of my fellow aikidoka and Sensei grew a lot over this seminar experience. 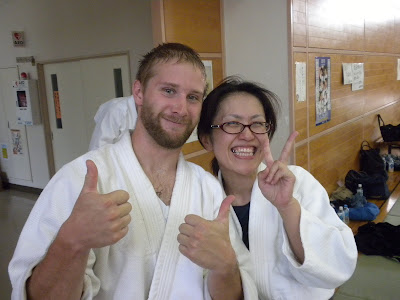 As for the specific details of the first day of the seminar, it was unbelievably hot and sweaty, I made a lot of mistakes, had a lot of fun, and can't remember all the details that were revealed to me. So I'd say it was a success. 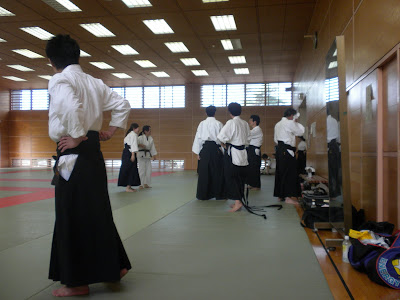 Aikidoka putting on their dancing skirts ... hahaha, just kidding, the pants/kilt/skirt is a hakama and it's very serious business, and I want one oh so very badly. 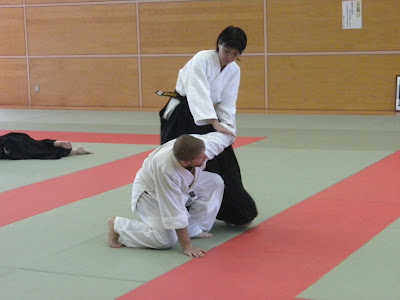 Gaijin about to eat mat. 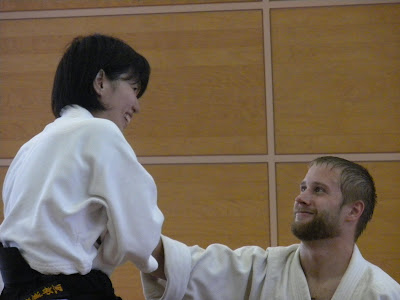 This girl is one of the higher ranking and toughest aikidoka in our dojo, and never gives you a technique. But it seems after 8 months I've broken her down with silly gaijin charm! Smiling in the middle of techniques. In aikido we smile through the pain. 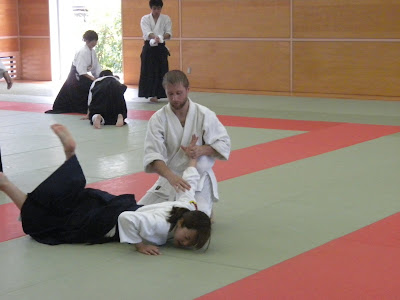 They even let me have my turn sometimes.
After the first day's practice, we went to where we were staying. Going into this, I actually had no idea where we were going. I expected something rudimentary like a gym or dojo. But instead, we were staying at a really fancy ryokan (traditional Japanese inn). We had a couple hours to get settled in, partake in the communty bath, and get ready for dinner. So, I grabbed Hosogoshi (best buddy who I climbed Tsurugi dake and Tateyama and went diving for oysters with), and we immediately found the beer vending machine on the premises. We hung up our sweaty-soaked gi (training uniform) and put on yukata (summer kimono) provided by the ryokan. 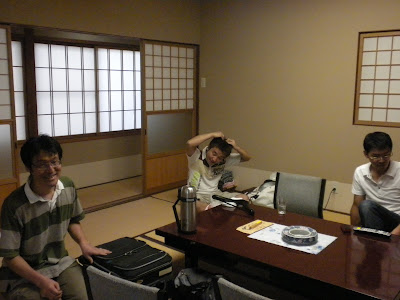 Here's some of the dudes. 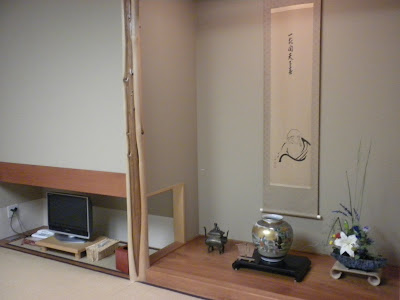 Some decorations commonly found in ryokan. 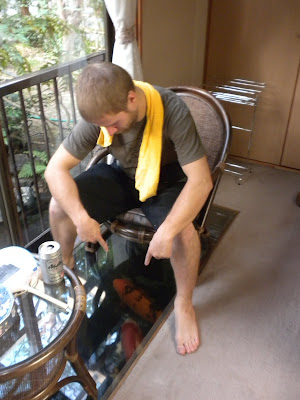 This room was built partially over the garden's pond and you could look down through glass to see the biggest koi fish I've ever seen. 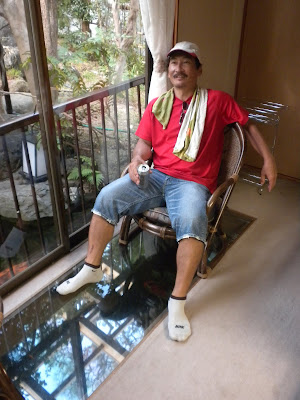 There he is! The famous Hosogoshi. Definitely the coolest guy in Japan. 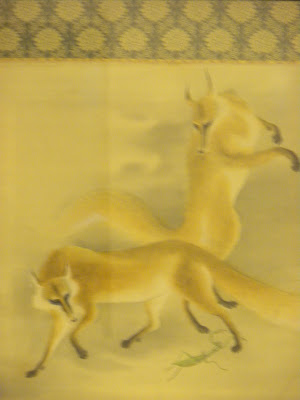 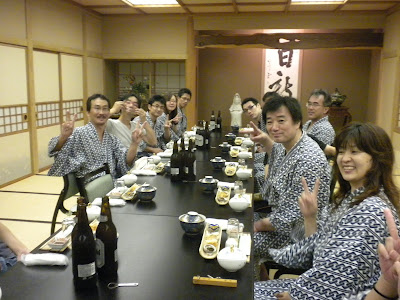 And the handsome looking guy on the right closest to the camera is Sensei!
When it was dinner, we gathered in a large tatami room which would be ours for the next few hours. We ate a fancy traditional Japanese dinner, but in fact, it sometimes makes me a little nervous. There was one dish I could absolutley not eat which was fish eggs in a sauce that looks like something I can't even mention on the blog. The person next to me took it down with a huge smile. But there was some sashimi (sliced raw fish) that may have been the best I have ever had in Japan! And then many other dishes in the middle that went from OK to really good. 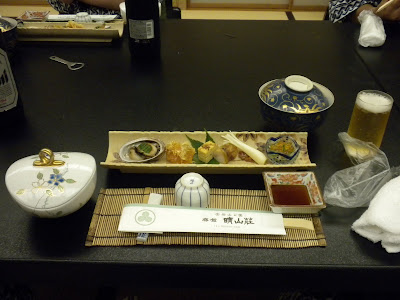 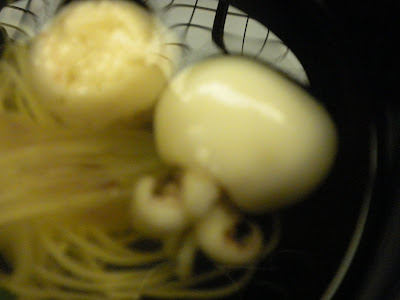 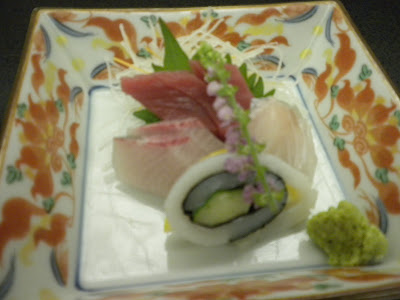 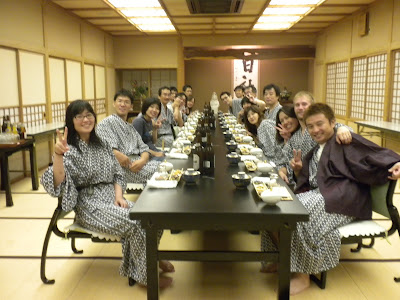 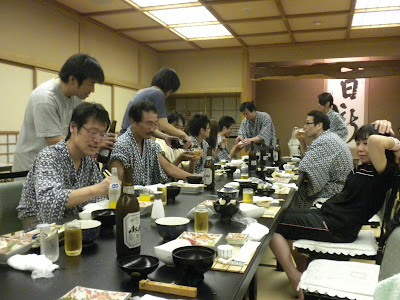 The woman on the right not dressed in yukata is Ueno, the number two of the dojo, and my favorite woman in Japan for so many reasons. 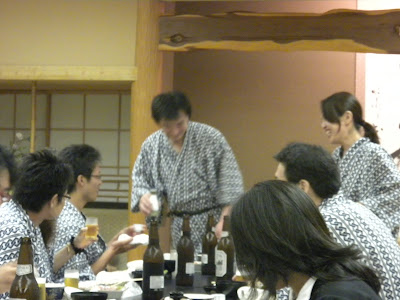 Sensei hard at work at the head of the table.
We also had what may be the cornerstone of Japanese dining: nomihodai (all you can drink beer and sake) which is always interesting. My great buddy Hosogoshi who was quickly reaching a peak of wastedness was philosophizing at a high volume about the "Human Bairas!" "Humans are a bairas!" I think he meant virus. Also, Ueno who is the number two in the class, was crying uncontrollably about her cat of 20 years that had died recently. Amid all of this, I had gone over to Sensei where we attempted a conversation about Aikido.
Conversationally, my Japanese is sound and I can understand a lot of what Sensei says now, but once we start talking about the specifics of Aikido, communication is lost. It was the beautiful the frustration we both had. We both had important things to say to each other, but the words couldn't communicate. One part I did understand though was about participation. He said two days a week practicing Aikido is not enough to really progress and become proficient in aikido (which is what I do), and we talked about the classes he has in Uozu two other nights of the week which we have talked about before. But I haven't nosed in too much without being invited for fear of being rude, and so the conversation usually dribbles away after he mentions that it's too far without a car. But I know the area well and it would be a 30-45 minute bike ride one way, which would definitely be worth it. We'll see how this progresses. He also mentioned that before I leave Japan, I should stay at his house for a month or two for aikido. Uchi-deshi experience? My stomach turned in excitement.
One other thing he mentioned was about his aikido. He said that he practices aikido to become strong. By this, he certainly doesn't mean he wants to have huge muscles, but something deeper. In class we follow plenty of protocol and tradition, but I know we don't do as much as many other dojos, or spend as much time talking about things like ki. My sensei is concerned with good technique, and that objective priority, makes for a great aikido experience for me I think.
After this seminar which marks 8 months of practice, I am dedicated, and have grown very close with Sensei and the other members. This next Saturday I have obligations at school, but I think next week I'm going to more directly and formally ask about classes in Uozu. My time here in Japan is precious, fortunate, and limited.
Eventually, we had fulfilled our welcome in the dinner room, and were told to go elsewhere inside the ryokan to continue on. At that point, I've never seen such a mad dash to smuggle alcohol out of a room. People were chugging their beers as well as any others in the vicinity half full, one person had taken the shochu bottle and put it down his pants, and Sensei was checking the bottles, consolidating the remains. I then remember last week at the end of practice when Sensei was talking about the seminar, that we would have nomihodai for only a couple hours, so we should sneak out as much booze as possible when it was over. 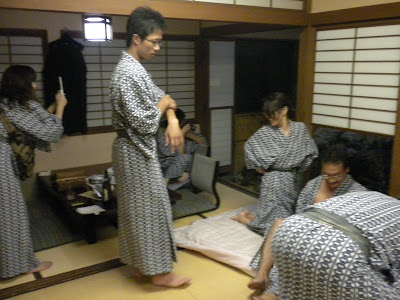 We amassed in another room for more debauchery. 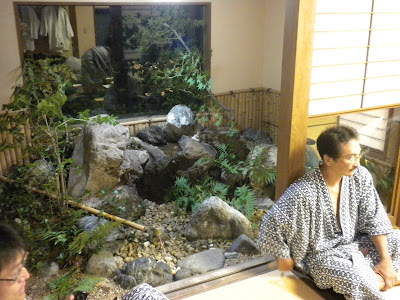 In one of the bigger rooms people were staying in, they had a garden inside the room.

The evening went into the dark hours of morning where me and two others were talking and drinking in our room, next to a passed out Hosogoshi. I actually got to the point where I was trying to speak Japanese, but my mouth could not physically make the right shapes and sounds appropriate to the language. It was time for bed.
After an unneccesarily early rise and seminar training session, we headed back home. But not without onsen of course.
I did have one great epiphany at the seminar though. I watched one of the white belts be thrown and while he was doing ukemi (roll), I could clearly see his bright red underwear under his soaked white gi pants. I shook my head and laughed thinking him to be quite the amateur, until I looked down at my own pants to clearly see my blue boxers glowing through my own gi. Silly white belts.
Posted by Zacky Chan at 3:24 PM