Being in Japan for almost a year and visiting my home in the States for the last 12 days has given me a lot to mill over in my brain. How long should I stay in Japan? What am I doing in Japan? What should I be doing in Japan? Should I give it all up? My experiences lately sparked an interest in remaining in Japan, but switching it up by moving somewhere new and finding a new job. So yesterday at school I began searching the internet.
In looking for other jobs in Japan, I have found an all too familiar trait of mine: an incessant search for something different and better. As I reread, "an incessant search for something different and better," it sounds to be a desirable quality, however, it has a dark underbelly plagued with the fatal flaw of disrespecting what is. 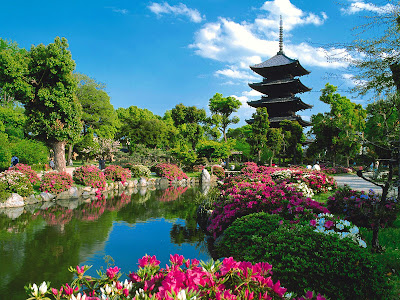 (Dreams of a beautiful Kyoto)

My dream to come to Japan was fueled primarily by an interest in traditional Japanese culture, and after being here for almost a year, I thirst for it's center in Kyoto. As if there is some epicenter, where my traditional Japanese heaven exists, and I can dwell there venerated and appreciated for my devotion while soaking in it's grandeur, benefitting from it's highest teachings ... and also being paid comfortably and living in a nice apartment with my girlfriend Jolene. A gateway to this life is what I was searching for on the internet. 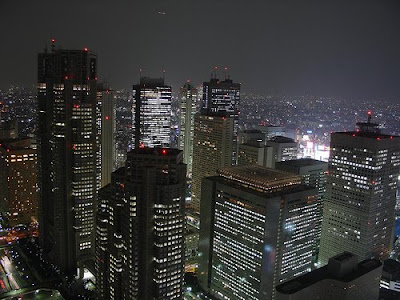 Actually, I have a secondary Japanese fantasy of living (and fitting in, which is the kicker) in Tokyo, and I started my search by following a lead on a program called Westgate, which is a job teaching English to students for 3 to 6 months at a university. This actually looked quite interesting, but one thing really stuck out: expectations for a 30 to 90 minute commute one way on trains that can fulfill one's worst nightmares of being crammed onto trains during rush hour by train station attendants. In my mind, images start flashing of the endless sprawl of nameless cities that stretch 30 to 90 minutes from the main districts of Tokyo. On Westgate's website, I soon found what it pays and the cost of rent. Both of which were in the wrong direction from my current situation. At Westgate you are paid 260,000 yen a month (about $2,600) and can expect to pay 90,000 yen (about $900) for rent a month. This is with the 30 to 90 minute commute on the trains as well. Comparing this with my current situation in Kurobe where I am paid 300,000 yen (about $3,000) a month and paying 40,000 (about $400) a month for rent, commuting 15 minutes on foot to school, and having an apartment which I can guarantee would be larger than that which I would be given around Tokyo, I begin to wonder how important living in Tokyo is for me. 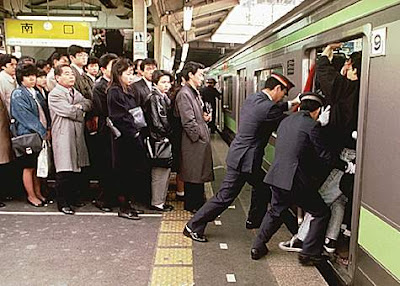 (Seriously, once for the experience is OK, but everyday?)

I continued my search for other potential jobs in Kyoto on gaijinpot.com, which seems to have a great wealth of information for foreigners in Japan, primarily job listings. I soon found 90% of the jobs were located in the Kanto region (the region of Japan which is mostly dominated by Tokyo) and maybe 10% in Kansai, which is home to cities like Osaka, Kobe, and Kyoto. However, all of the jobs I found or the Kansai area included locations all over the Kansai, which means being in Kyoto would probably be the last possibility because of its popularity. Most of these jobs pay between 200,000 and 250,000 yen a month, guarantee lengthy commutes, and say little about help outside of the job with finding an apartment or supplying health insurance, etc. On some of the websites for these specific companies, you are bombarded by pictures of gaijin employees that look more like movie stars than English teachers, and wearing suits sharp enough to empty my bank account a few times over. From my small experience in the English teaching world in Japan, I expect things would be much different than they reveal on their website. Also, why would I want to try and get hired into a company that looks like that?

(Oh god, please show me the schedule before I mess my pants)

My dreams of spending time in ancient wooden temples, clad in kimono and wielding a katana are slowly being replaced by sweaty commutes to a small office in the outskirts of some megalopolis. Maybe I should give it all up and become a monk instead, that could guarantee the whole spending-time-in-ancient-wooden-temples right? 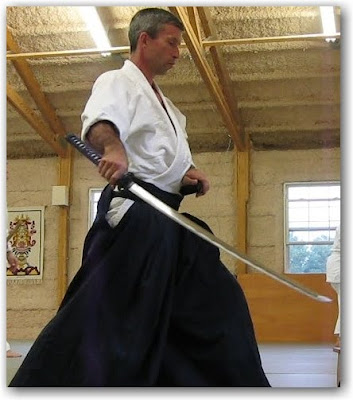 (What I dream about)

One of the most interesting pieces of information I kept running into concerned the JET Program, which I am currently a part of. The phrase that stuck out most was, "The Jet Program is considered the holy grail of teaching English in Japan." Without getting into all the specifics of the JET Program, I can say that because of my employment, I am paid much more than the other English teaching jobs I have found advertised, I teach at a high level high school which I prefer to elementary and middle school, my commute is a fifteen minute walk through my small town, I live in an apartment with tatami mats (which I wouldn't trade for anything) that is considered large by Japanese standards, I am very happy with the people I work with and the students I teach, and I live in a rural town next to the sea and some of the tallest mountains in Japan. A town which I would never have visited if I hadn't been placed here. Here, I have also found more than enough teachers to discuss Japanese history, culture, and language with, practice Aikido in a dojo that continually exceeds my expectations, and have found plenty of mysterious temples hidden in the forests and mountains. 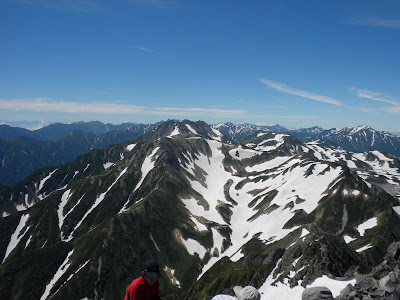 (From Tsurugi-Dake, one of the most famous mountains in all of Japan, and looming over my home in Toyama prefecture) 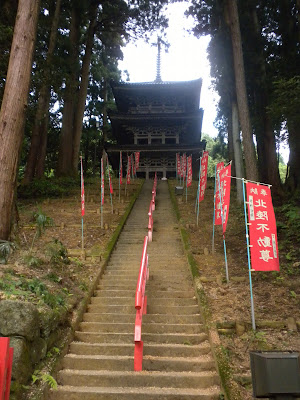 (Oiwa-san Nisseki-ji, a temple a couple hours from my apartment in the forest)

What am I to think when looking at my current situation here in Kurobe with the JET Program, and contemplating scrapping it for a comprable English teaching job in famous cities like Tokyo and Kyoto. Looking around at the other teachers, looking out my window at the Northern Japanese Alps, and realizing I've spent all morning scouring the interenet for jobs somewhere else in Japan, I am overwhelmed by the fortunate situation I have here in small-town Japan. 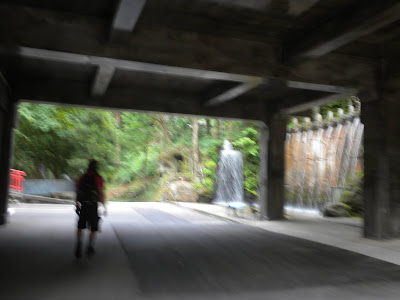 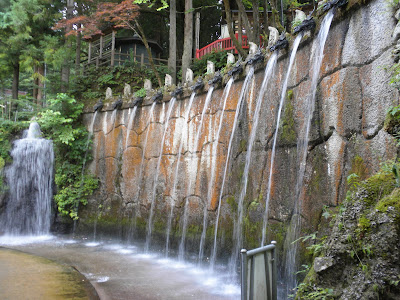 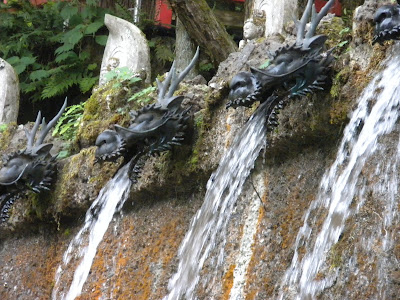 (If this doesn't fulfill Japanese dragon/temple fantasies, I don't know what will)

By fiendishly desiring a "different and better" Japanese experience, I feel I am equally disrespecting what I already have; what already is. This trait of mine has certainly revealed wondrous treasures in my life. In fact, my presence in Japan is the product of this very tendency. But I wonder if it can go too far. How could one possibly know how to differentiate?
If I do have some dream which is in fact different and better than what I have now, then by all means I would pursue it with the fury and discipline of Fudo to realize it. But if I am just trading locations and English teaching jobs (which aren't particularly my favorite) for some image worship I have with Kyoto and Tokyo, then perhaps I should appreciate what is a little bit longer before I make a decision.
For now, I am going to spend this Saturday on my bike following some river into the mountains searching for temples and bears.
Posted by Zacky Chan at 9:07 AM