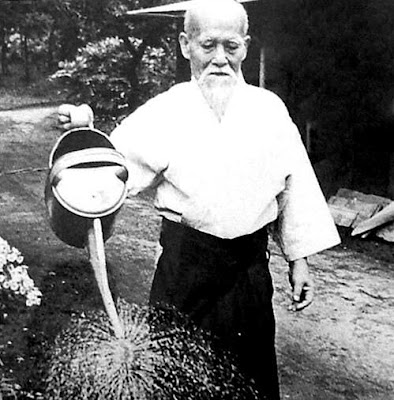 First of all, the things I want to talk about are seemingly impossible to express completely in words alone, and those words inevitably betray the meanings they are trying to represent. Regardless, I experiment with these limitations.
What I am doing at all of these aikido practices is trying to steal the secrets of effective movement. There is no need to hide this with formalities, moralities, and ideologies. I care for absolutley nothing but being absorbed with Truth. My aikido practice and life just happen to be in the context of respect and genuine human interaction, but these are not things I consciously focus on putting effort into. I would love to practice aikido for the rest of my life, and it would be so great because aikido is so great and I would be so great and aikido could be better than everything else and I could be old and have spent so much time in this great aikido and thusly better than anyone else that has done it for less time than me, and I hope one day I can be like those masters who practiced longer than me, etc, blah blah blah...
I am not practicing aikido for the idea of aikido, I'm practicing aikido to find an ideal movement. I am not stupid, I am not a slow learner, and I don't want to be either of those. I simply want to do what my sensei does, and then do it better. What I am doing is stealing secrets and keeping my eyes peeled wide back looking for shortcuts. The best thing about this is that my sensei is the same way. I am looking for that bridge between the land where I live "right now" and that of "incomprehensible ability." How can I know where my ideal is? Where I am going? If I did know, then either I'd be there, or it would be, at best, an abstraction different from the wholeness of reality.
Tonight at the end of practice, we were simply working on movement. The partner would come in with shomen uchi (a sword hand movement cutting straight down in front of you with a step forward), and we would make smooth movement with minimal effort to evade the attack. However simple this is, most of us were having a very hard time. We were trying to anticipate where exactly the partner was going. We were trying to think of the best angle to make. We were hesitating, clumsy, and sending our body parts and mind in different directions. How is this possible? We are moving to move. Moving to get out of the way of something? This is not a magical skill reserved only for masters, it is simply what it is: relaxed efficient movement. If we would all relax, and just move instead of thinking and falling over all these hurdles we create ourselves, we would be on a fabulous shortcut.
Furthermore, I have developed two big pet peeves in arguments that often come up in the topic of martial arts. First, is the term "natural movement." This is used all the time, as a teacher tells you to stop screwing up and just move naturally. The person is moving naturally and appropriately to their current state, it just happens to really hamper the technique the teacher wants them to be doing. I understand ideas of "not fighting force with force", or "not making something more work than it requires", but the word "natural" is very misleading in the way it is often used in martial arts. Second, it's the idea that as adults, we are clumsy and we've screwed up somehow this idea of perfect movement that we would be doing if we weren't so stupid. That our movement is inherently a problem. Our current movements and abilities are not problems to fix, or something that will so greatly hinder our lives if we don't pursue right away. To try to analyze why it is we don't automatically, or dare I say naturally, move perfectly already, or why it is we have the ability to move so well is to go much farther in an intellectual direction than is necessary to do the movement.
Relax, don't waste your time trying to punch through concrete walls, and just do what you're trying to do. This is my lesson for tonight.
Posted by Zacky Chan at 10:44 PM