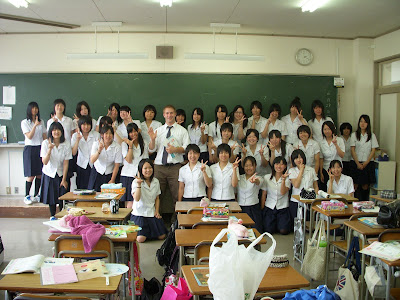 Because I'm leaving my current school in about a month, things are starting to come to an end and goodbyes are being made. This is a picture of me with my 2nd year seikan students. Can you tell which one is me? I'll give you a hint ... I'm the only one that's not a 17 year old Japanese girl in a school uniform.

At my high school there are three kinds of classes: futsuuka which is general course students who will most likely go on to academic universities, doboku which is civil engineering and is more vocational in nature and 99% all boys, and then there's seikan, which is homemaking and 99% girls and they ... will be homemakers? When asked what they want to do when they grow up for work many of them say they want to be pre school teachers or hair stylists or patissiers, which is pretty smart because they will always need more of all of those in Japan. Anyway, it was announced that this was my last class with them so the Japanese teacher asked if any of the students had messages for me. It was dead quiet, then turned into giggling, and at the end of class we took a picture and I got about 10 notes from the students they had written and folded into origami hearts.

Oh yeah ... aikido ... I got a bit distracted there. Aikido's affect on teaching. I actually really don't have much to say on this topic except I think it works against school systems a bit. In aikido you're working with one person at a time and so a lot is based on a teacher/student relationship. Furthermore, that relationship is experienced on a lot of instinctive and physical levels beyond mere oral communication. English is no different ... not at all. Sure there's the mental processes of using a language, but then there's the whole realm of the experience of having a conversation which plays a part. For example, who you are talking with, who you are yourself, where you are, why you are talking, emotional states, past experiences, etc. In aikido it's obvious that each situation is different though you may be doing the same technique you've done thousands of times, and so you need to adjust to this accordingly to each scenario. For me teaching English, that means I want to communicate with each student, which means I would teach different to every student. But in a class of 40 students in an hour once a week, that's a little difficult. Also, it doesn't help that the motivation for teaching English to Japanese students is primarily to do well on college entrance exams, which is more learning complex sentence structures and less functional conversation. Furthermore, because of a million different reasons, most students do not want to learn English. I guess I'm the answer to these problems of teaching English in Japan. I'm a young American used to get kids interested in English and help students with conversation. However, I'm often times more like a poster on a wall than a living person who can communicate with people.

I've kind of got off track here and I don't want this to become a rant about the shortcomings of mainstream education. My point is, learning in aikido happens on a very personal and situational level between teacher and student, and so when I try to bring this in the classroom I start focusing in independent students instead of the group, I change a little bit between each student, and I do whatever it takes to get the student to understand and be enthusiastic, which is arguably the most difficult. Also, I've found that after two years teaching, I've started doing the big "No-No" which is speaking Japanese in the classroom when I want to get my point across.

But my primary concern is communication. If the students have absolutley no idea what I say, then they'll be confused and probably feel subconscious about that, so, sometimes I whip out the Japanese, which they love from time to time because they get to see me struggling with a foreign language. Basically, the biggest block I run into with teaching English is student's low level of confidence. Before they can really start learning and using English at a good pace, then they need to get past that. It's like trying to teach people high falls in aikido when they're afraid of doing a simple front roll! Or maybe showing someone how to do a technique by lecturing for 20 minutes, give them one chance to do it right, and if they don't then tell them to try harder or study more.

Perhaps it's a good thing that in my next job it will just be me with about 5 students at a time doing whatever to get the students to speak English.

The other night I was in the "strange" aikido class and sensei was trying to explain something very important. That a lot of young people's strength is dependent on muscle strength, but really, it's not all that strong. In aikido we use a different kind of strength ... but what kind of strength sensei was calling it I didn't know. I thought I understood the concept pretty well, but I didn't know the word and sometimes the specific meaning really makes a difference. So, I went home and looked it up ... but couldn't find the word! I asked a teacher the next day and she gave an answer that didn't seem to match. So the next night I went back to aikido and after class I got out my dictionary and said "Sensei! I couldn't find the word in the dictionary," and I motioned for him to find it for me and he said, "It's too small, I can't read it," in a dismissive fashion. I had one of the other students help me find it and it was exactly what my English teacher had told me earlier, "concentration" ... shuuchuu suru. I was confused, and then just frustrated because it's another very important word to aikido that just isn't quite in English. Perhaps a good translation would be "structural strength" or ... mmm I don't know really. The kind of strength that doesn't dwindle away when you get older, but may increase because you are more comfortable in your body and if you do aikido you'll have more experience in dealing with other people's bodies in movement.

Anyway, afterwards I said to sensei, "Japanese is hard."

"Which do you think is harder? Aikido or Japanese?"

"Because you can only learn aikido from someone who is good at it and it takes many many years."

Ahhhh sensei, I'm kind of disappointed in you! Surely there are differences, but in reality, you can't just learn a language from studying alone and it certainly takes many many years to be "fluent" ... just like being "good" in aikido, but in both worlds training is never complete. Also, if you never speak a language with native speakers, it will never be quite right. I wish all of the English teachers at school would try and practice aikido and I sometimes wish I could put sensei in a room full of only-English-speakers for an hour and see how he likes it. Hehe, funny stuff. I'm glad I get to suffer and benefit from the experiences I choose.
Posted by Zacky Chan at 11:54 AM