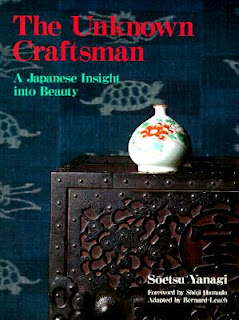 What do pottery and martial arts have in common?

Well, that's what I want to try to explain over the next few posts as I read through Soetsu Yanagi's, "The Unknown Craftsman: A Japanese Insight into Beauty." For a brief introduction to the man, here's what Wikipedia has to say:


Life
In 1916, Yanagi made his first trip to Korea out of curiosity about Korean crafts. The trip led to the establishment of the Korean Folk Crafts Museum in 1924 and the coining of the term mingei by Yanagi, potters Hamada Shōji (1894-1978) and Kawai Kanjirō (1890-1966).
In 1926, the Folk Art Movement was formally declared by Yanagi Sōetsu. Yanagi rescued lowly pots used by commoners in the Edo and Meiji periods that were disappearing in rapidly urbanizing Japan. In 1936, the Japanese Folk Crafts Museum (Nihon Mingeikan) was established.

The philosophical pillar of mingei is “hand-crafted art of ordinary people” (民衆的工芸, minshū-teki kōgei?). Yanagi Sōetsu discovered beauty in everyday ordinary and utilitarian objects created by nameless and unknown craftsmen. According to Yanagi, utilitarian objects made by the common people are “beyond beauty and ugliness”. Below are a few criteria of mingei art and crafts:

Without writing a biography on him (or even cutting and pasting one), what's important in my discussion is his glorification of the term mingei. In his writing, Yanagi often draws contrasts between traditional mingei and modern individualistic productions. I don't always agree with him, or at least I don't understand his arguments completely, but Yanagi's words present a great puzzle to me as to what deeply rooted dark source lies beneath the creation of pottery. He is deemed a philosopher, but I'm not sure he'd be content with such a title. A philosopher creates ideas concerning abstract ideas and the physically manifest world. I don't think Yanagi would agree that he creates any of these particular ideas, but instead seeks to follow the natural laws of the world, and from those limitations, creates pottery, which in turn can define and possibly create new realities. Aligned with this philosophy (if I dare use this word I've already deemed inaccurate), he advocates practice before theory. In order to know about a particular subject, one must have an intimate relationship with it through the experience of creation. A potter who has spent their life constructing honest pieces while saying or thinking nothing on the matter will know more than their counterpart who merely philosophizes.

I haste to say it's up to personal opinion, but just like philosophy, I think opinions lay at the end of the production of art.  Art is an expression of reality; mountainous experiences untouched by the clouds of theory. And yet, it's those clouds that produce the rain which carve lines in the mountains ...

I've dreaded writing some kind of introduction to this topic, and just look where I've gone with it! Let's just get started with the damn thing. Instead of paraphrasing Yanagi's chapters or analyzing every bit of the house, I will attempt to tease out the most provocative bricks and speak from there. Though to have the best discussion all of his words should be considered. Regardless ...

Pattern (using the example of a pattern of bamboo)

"How is it that one sees the bamboo in the pattern? Because the essence of bamboo is there, just as prolonged boiling renders a concentrated flavour. The process of making a pattern out of raw material is similar, it is an extract, so when we look at a good pattern we perceive something of greater content. No bamboo grass in nature can be more beautiful than a bamboo grass pattern. We can never see nature as more beautiful than a beautiful pattern. If we see nature as beautiful, then we are, in a sense, seeing it in patterns. Pattern is the crystallization of beauty. To understand beauty and to understand pattern are aspects of the same thing."

Parallels budoka? In Karate there are kata. In Tai Chi Chuan there are solo forms. In Aikido we have particular waza between uke and tori. All of these are predetermined movements created to simulate the reality of physical interaction, usually implying violent and uncooperative partners. Martial arts are a crystallization of nature, thus a crystallization of beauty ... thus more beautiful? To understand this I think requires us to abandon any concepts of objectivity. There is a bamboo plant. There is a human looking at a bamboo plant. The bamboo plant is not just the bamboo plant anymore, but an experience that involves the viewer. The interpretation of the viewer, be it conscious or unconscious, seems to be more beautiful to Yanagi than the bamboo in isolation. Furthermore, he seems to make a point that the conscious effort of interpreting that bamboo into a work of art is even more so. But perhaps I go to far.

This discussion however, marks an intriguing debate for martial artists: What is more beautiful? Nature itself or distilled techniques?

Wow! That is not a question to be left by itself. There are some serious issues here to make clear before we go further.

First of all, what is "beautiful" in the martial arts? Actually, what does "beauty" even have to do with martial arts? Should we just throw beauty out of the question altogether when discussing martial arts? In my opinion, at this stage, yes; we should throw beauty out of the question altogether. Like philosophy, beauty is something to consider after the fact, not a reason for necessarily. Martial arts are a utilitarian endeavor. Whoa! Back up to the top of the post and read bullet points found in the wikipedia cite for what constitutes mingei crafstmanship, "functional in daily life." Furthermore, the wikipedia cite states, "According to Yanagi, utilitarian objects made by the common people are 'beyond beauty and ugliness'." Yanagi makes a big effort to show that utility must come before any concepts of conscious beauty in order for real quality in a product to arise. We're not just dealing with "art" as a whole necessarily here when comparing pottery and martial arts, but a specific kind of pottery which emphasizes particular factors that are also found in the martial arts. Conversely, I'm talking about martial arts that have a defined purpose to start from, instead of others that start from the ideal of beauty and work to technique.
OR AM I?
Crap, somehow martial arts seem to be more complicated than pottery, just when I thought it was the other way around. Martial arts are not pottery. Pottery, and design, mimic patterns in nature. For example, a design of a bamboo plant. A bamboo plant is a specific entity in nature. Humankind's interpretation of the bamboo plant into design is more beautiful than the plant. However, martial arts are not a design or reproduction of some single entity like a plant, but seek to simulate a situation: physical interaction. So, man's interpretation of physical conflict is more beautiful than physical conflict? These are two very different things I think.

The purpose of a bowl (pottery) is to hold something.
The purpose of a technique (martial arts) is to ... ummmm ... OK, here I go: To protect oneself in a physical confrontation with a malicious counterpart. Nope, that's not it. I'm not happy with that. Because ... I don't think there is "the Purpose" to the martial arts.
WAIT! I've got it now. So, yes, we can ascertain the purpose of a bowl, to hold something, and martial arts, to protect oneself. But then we're disregarding the concept of beauty, which is what Yanagi is trying to explain. If the only important factor to a bowl was holding something, then Yanagi wouldn't have a problem with crass mass production, but he does. If martial arts were all about self-defense, then I wouldn't be practicing aikido.

There is something in martial arts beyond self-defense or violent capabilities. Self-cultivation? I'd like to find some other words for that. Beauty? Certainly not that alone. This is a riddle.
The distillation of pattern from nature is more beautiful than nature itself. This involves a relationship of interpretation and creativity. It is not some abstract concept nor a static animate object in isolation, but the act of engagement.
The continual process of life.

Which bowl is better? Which martial art is better?