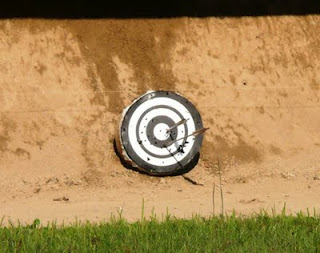 Almost a year has passed since I shifted jobs and locations here in Toyama Prefecture, Japan. That's also how long I've been away from frequent and consistent Aikido training. For almost a year I've been in exile here in Toyama City, visiting children's English classrooms instead of dojos after nightfall. I had a lot of ideas about how this new chapter would run, and how it would transition to the next phase. I suppose I was accurate in the presumption that I would take advantage of this new situation by cultivating a solid independent study of martial arts and Japanese. Those have been successful I'd say. But I didn't foresee the large amount of time ... wasted(?) ... perhaps that's a little harsh ... time spent ... worrying(?) ... or maybe just brooding, on my life and current situation. What I have with my new situation is a large amount of free time in the mornings and afternoons. With that I've climbed mountains, literally as well as figuratively with my own studies ... but I also went through a lot of swampy terrain in my head, which I'm not sure was necessary. Well, it is what it is, and without digressing too much, it is enough to say that I haven't taken the time to find new budo practice with my free time; at least until about a month ago. It all started with a conversation with one of my sempai, a coworker-mentor of sorts; English doesn't seem to have a good word for this particular relationship.

Sempai: "Dude, I think I'm going to get back into Kyudo. They're offering a two-month course at Kojo-koen in Takaoka."

Me: "Really? Can anybody join?"

"Yeah, doesn't matter who you are as long as you pay the cash."

(Thinking to myself in my head: "Mmmm, Kyudo??? I'd rather just worry about aikido. And 10-12 in the mornings? I'm kinda trying to do my own English lessons on the side for cash, I can't be starting Kyudo as well right?")

After I went home ... with a lot of that open time I have, and just thought. I thought and thought and thought a lot. I guess that's how a lot of my time has been spent. It sounds boring, but when you drown it with coffee and think about all the other little details of things you should do, it really feels pretty busy ... hectic even ... actually apocalyptic at times.

So I thought, and then a part of me stood against the rest of me:

You came to Japan exactly for this reason! You would have done tea ceremony if it was offered from the beginning, but instead you found exactly what you wanted in aikido. Well, things changed, and you're trying to get back ... but are you seriously going to whine about not being able to practice budo in Japan while being offered this course in one of the coolest budo of all? TAKE THE FLIPPING CLASS!!!"

I then talked to my sempai face to face about joining and he took me immediately to the park to sign up.

And so now, two mornings a week, I practice Kyudo and I absolutely love it. Should I have started it earlier? That's a stupid question. I'll just write down some of the details about the class now, and elaborate with funny stories and revelations later on. 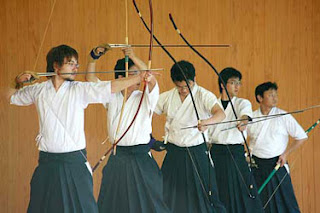 Location: Kojo Koen, the most beautiful park in Toyama Prefecture in my opinion, located in Takaoka City, the second biggest city in the prefecture and a 20 minute train ride from my house (close compared to aikido practice). The dojo is a beautiful building, with a long grass lawn until the 5-target set up. 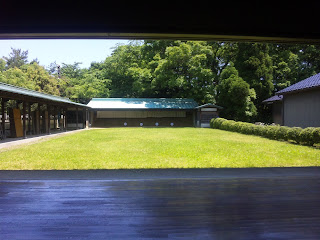 (a picture of the Takaoka Dojo, the grass is more overgrown right now and looks cooler I think, also there's usually one more target on the left side)

Cost: 5,000 yen for the 2 month course, 2,500 yen for the small essentials like a rubber practice apparatus, string, guidebook, cloth that goes over the hand underneath the glove you use. (once I get more familiar I'll probably use the official Japanese terms. But I don't expect you guys to be familiar with the terms either, so maybe it's for the best)

Class Members: Tuesday mornings: Me, my friend, Sensei, and three of his senior members present solely for the purpose of helping me and my friend. Any of you budo practitioners should be messing your pants after reading that, because it's an unbelievable oppurtunity! 2 students and 4 teachers! All to ourselves for 2 hours! Friday morning, there are two other members, which hardly affect Sensei's time. If that's not enough, there's an evening class offered as well, which has 18 students. I don't even know how they all fit in the dojo holding bows. And, there's only Sensei and one senior member helper. I guess I'm pretty lucky for my open mornings after all.

Sensei: Strong, funny, aware. Excellent qualities. I've come to like this guy a lot, and have built quite a bit of trust with him. In my budo experience, the people, and for a student's sake, the teachers, are what are most important, and with that, I progress happily through this two month course. 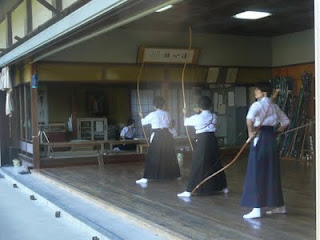 This morning I realized we only have three classes left in our 2 month course. Due to prior obligations, my friend will return to his prior dojo at the end of the course in another town. But as for this gaijin, I will be taking measures to make Kyudo a very important practice in my life with this dojo.

But not too important. I still have other things to do ... like drink beer ... or at least the cheap imitation stuff I can afford to consume.
Posted by Zacky Chan at 9:38 PM