Tenouchi: A Grip on Life 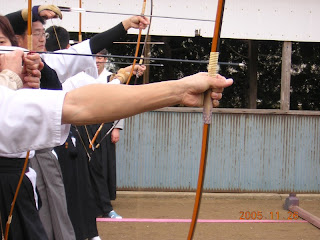 (tenouchi)
I want to go high places so I look up.

I want to go far places so I leave.

I want places I don't know.

If I already knew a place, I wouldn't want to go.

I want to go, and I don't know. So, I study and build a plan. In order to achieve the goal I protect the plan. A man with a plan in the world: a precarious situation indeed.

How I deal with my plan largely depends on how I fix my tenouchi (left hand grip on the bow in kyudo). As I've mentioned before, budo is often simply just putting the right things in the right places at the right times. This has very little to do with mere physical strength. Nor does it concern the kind of tenacity that blows through obstacles no matter what. It's a game of sensitivity. My teachers tell me specific points that will help me improve my technique. I listen to them and do my best to imitate, but it's not perfect. This is because I try to do what they do utilizing my strength and determination; they do it by just doing it. They utilize only what is necessary to complete the goal while I bring the whole toolbox. "But what if you need more?!" "But you don't."

"Relax" they say. "Strength will not help you."

I watch my teachers do their tenouchi close up on a small-scale and I see exactly what they mean. Their analogies make perfect sense. But, when I stand up there in front of the target, I find myself wrestling against the strength of the bow. This is the part that is hard to explain, not just for me on a blog but also teachers in the dojo.

Very mysterious stuff, this kyudo. And yet, it's all just putting the right things in the right places at the right times.

Oh yeah! I almost forgot about my apocalyptic struggle to understand life and do everything right. So, it's obvious that what isn't going to help me in life is pure strength and determination. A bit of those two things are necessary to be alive, and used in the right circumstances will greatly contribute to my growth, but beyond what I need, I don't need. Instead of blowing through life in order to protect my goal, I need to sit a bit, quietly watch, and treat my actions softly. Holding the bow in kyudo should be like just holding anything. If you're holding it, you're holding it. You don't need to squeeze it as hard as possible. If I'm living, I'm living. I don't need to live as hard as possible, or whatever. I have goals and plans rooted in my imagination, and I will continue to formulate and execute them, to much failure and suffering I imagine, but acceptance of those kinds of circumstances is paramount, just like vision to understand the situation and adapt as needed.

Fundamentally, this is the soft overcoming the hard. We are malleable entities, engaged with other various substances in the world, many of which stronger than us. We can choose to confront them with our own strength which only has two outcomes: breaking ourselves or breaking the other. Personally, I want niether of these. Perhaps we don't notice it so much when we break others (stepping on bugs, intimidating others from confronting us, our immune system fighting off viruses), so for now I'm more concerned about the possibility of me breaking under others, which is something I don't want. If I can't use strength, then I have to use something else. Here we have many options. I can creep into the cracks of the strong and break it from the inside. I could ride the strong and use it's power to my advantage. I could get out of the way of the strong and not even deal with the hassle. (Aikido analyzes this well with its geometric philosophy concerning the square, circle, and triangle.)What I am concerned with is being weak, because I am so, concerning my points of focus. I cannot break my goals like I may think I want. (Isn't it strange that initially we want to be stronger than the world and we never want to lose, and then sometimes, often subconsciously, we don't want to win, and in fact want to lose?)

"Need." What do you need? This need will make you hard and easily overcome.

We are human. We have needs. We will die because of link with need.

In order not to end on such a morbid note, I'll tell you about something interesting I learned about my kyudojo the other day.

It's a place of wonder, our small kyudojo. It's in the center of Kojo Koen, a large park that used to be the site of a castle (I'm 99% sure), and it's by far the most impressive park I've seen in Toyama Prefecture. It has a giant moat and indirect walking passages through it, some of the more notable features of it's feudal past. It's full of beatiful vegetation, some natural and some intentionally placed. There are rivers, small hills, and a few wide fields. Also, there are various centers, museums, and even a small zoo. In the very center of the park is a large shrine. Next to that shrine is our dojo. Because it's located in this kind of park next to this kind of shrine, I assumed the dojo had a very old history dating back before the modern periods of Japan, an innocent time before contact with the West. But I was very wrong. It's actually not that old of a dojo at all with respect to my deep imagination of Japanese history. It's about 40 years old, and was built from the pocket money of one man. (!!!) One of the first things I noticed about kyudo was the need for so much expensive stuff and places. The person who explained this to me told me the price, but I've already forgotten it. To be sure though, it's an unbelievable feat. After it was built, the man said that it should be a place for people who want to come to kyudo. Nobody has to do kyudo. If one comes to do kyudo, it should be based upon their own individual desire to enjoy the experience.

I will walk into the dojo from now on with that thought in mind. 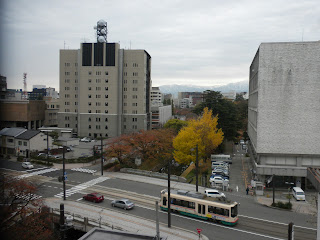