The Art in Martial Arts: Part 2 of Forever 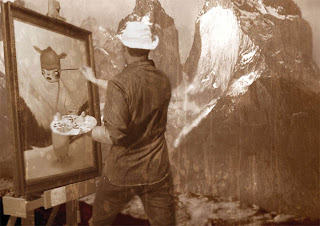 (Picture of Seattle artist Scott Musgrove found at http://www.wired.com/underwire/2009/08/artist-pictures-extinct-bestiary-in-late-fauna-book/)
I like music. I like music that consumes me. I like music that effectively transplants feeling. Because of this, I happen to like long songs with powerful feeling; heavy metal, trance, ambient, classical, as opposed to three minute and thirty second pops you here on the radio. When I get that feeling from music, it's like I'm participating. I guess that's what dancing is. Music is art, dancing is as well, due to the participation? What about when I sit there motionless listening to music? How is that anything different than the art itself? Would it not be art because I am without conscious action? What about artists who claim that they create art best without conscious thought?

I also love visual art. Who doesn't? Rather, I guess it's not about "loving" "art", but being affected by it. Anyway, I'd say visual art is a big driving force in my decision making progress. It's a big reason why I came to Japan. Maybe not for paintings persee, but visuals as a whole. In a way, my life is just chasing images. I don't create visual art just like I don't play music, but like music, when I see art, I am consumed with feeling from which thought and action arise. Again, it's a kind of participation. When I am with art, I feel something and create experience. When I don't have these things, I look for them.

Or, I even try to create them in my own life. How can I represent or express the music and art I love in my own modes of expression of writing and the martial arts? How can I make you feel Opeth's "Deliverance" while doing aikido or writing on Gaijin Explorer? This seems to be a very difficult concept to materialize. There is music which is created by people making sounds. There is visual art created by people who manipulate things to make an image. There is writing where people write words to do ... something (maybe that answer is the key?). There is martial arts where people use their bodies to some aim relevant to warfare (is that really what I do?). They are what they are, and I can't play music while doing martial arts without actually doing them both at the same time. Well, actually you could play a guitar while also doing iriminage... that's an interesting image.

But again, without actually playing music, I want to communicate its power in my arts of movement and description. Where do these arts connect? In thought? In feeling?

Again I come back full circle to music as basically someone playing an instrument, etc.

Art is Mind. Mind is conscious action in a direction. Skill in an art depends upon time spent participating and an amount of Mind put into the time.

We come out with honesty of expression, enthusiasm in creation, a lack of mind towards things that are not that art.

But that last bit sounds shady. Can you say art is not something? If so, what are they? These agents of non-art ...
Posted by Zacky Chan at 10:04 AM