A day off. What to do while everyone else packs off to begin the work week and school? Ride.﻿ 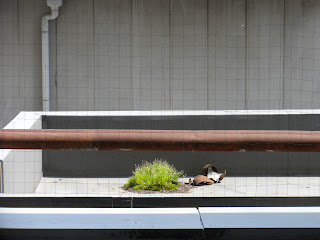 Something about the morning was amiss, so I took the stairs instead of the elevator. This I found, a pot fallen from someone's sill. Or purposely cast perhaps. Regardless, the plant continues to grow. 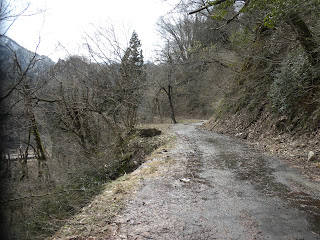 Things have been strange lately, much like early spring skies. Blue cloudless moments allow golden sunlight down for brief spans until dark clouds sweep back through to remind us of dark winters. Wind blew me sideways the whole ride through the plains, slowing my pace while demanding more effort. Why? 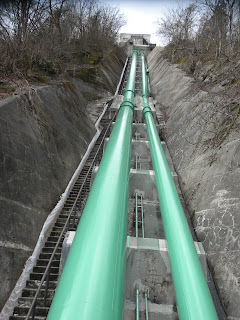 I adjust to each shift, but tire from the change. It's only recently I've begun to realize what people mean by "Hope". A lot of peole like to talk about it, as if it's the one bright sword to fight all demons. It is a special thing indeed. When you fall down cracks, digging further down, concepts of good become so far away, and a small flash of this so-called Hope can change it all. But change it will again, when you forget. 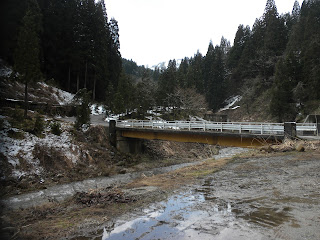 The road I wanted was barred by a flimsy barracade. Obviously it was meant to keep cars from entering, but offered little incentive to avert one's effort. I assume it's less about impending danger or severe penalty, and more about the roads not being maintained to a perfect condition for normal cars to go through. Hesitantly I rode past. Soon I found though that it was one of the best roads I'd been on to date, relatively flat, small one lane smooth road, with just enough debris to make it fun to dodge. 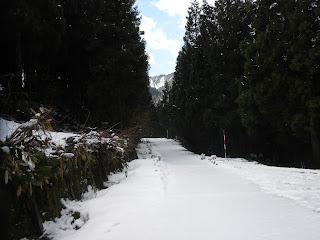 Soon parts of the road revealed long stretches of snow. No one has been here in a long time. I wonder what kind of things have settled here in the absence of humans, during those long months of quiet isolation. People know nothing of this silence; it's not in our nature. Yet, we can see it. 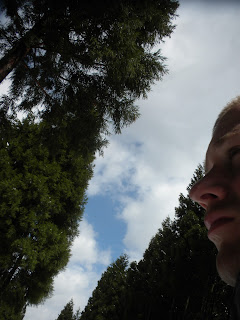 Every once in a while I need a break. When I need a break from riding, I walk and push the bike. When I can't do that, I park the bike.  I couldn't sit because there was snow everywhere, so I just stood there. What am I supposed to do on a break? Why don't I just go? Such a simple question seemed so difficult for me to answer. My own silence in the world seems impossible to grasp. 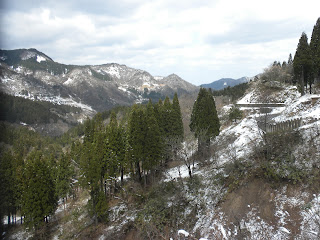 What am I supposed to do? 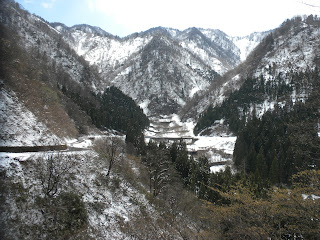 What do I want to do? 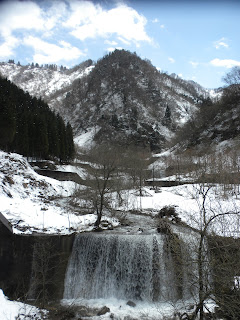 At one point the snow became to deep to easily push my bike through. I looked in my guide book, stared at the mountains, and judged what I thought to be the mountain I was attempting to climb. I saw the route. It was very long. I calculated the time. 2 hours up. But, I always undershoot the time, and I also had no idea how much snow was on the path ahead. At this rate it was just barely tolerable, and it only came in short patches. What if it was deeper, the whole way? Ascending further, one could only assume so. I made it to the dam pictured above. 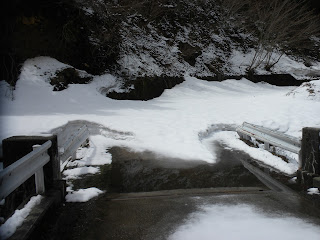 This is what lay on the other side of the bridge. I had spats covering my lower legs, but my boots are old and not water-proof. My feet were already soaked from stepping in a deep puddle while looking up at the trees. I was hungry, and only had a couple conbini sandwiches. This was my day-off.

What am I supposed to do?

At an earlier time I decided that riding my bike to climb mountains was what I wanted and should do. I've come here, doing it, but failing the mark. If I succeed, all of the suffering will be worth it. If I turn back now, what will that be?

I quickly stopped the overly-concerned spirit battles and plainly decided that climbing the mountain wasn't nearly worth the risks involved. So I ate my sandwich, and walked back to my bike to descend back to town. 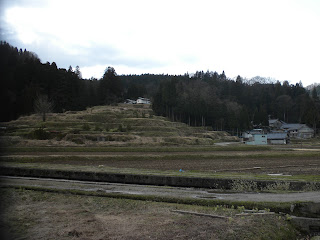 It was a pleasant ride back, as it usually is. Just downhill cruising. The small patches of snow provided entertaining challenges, and most of the time I had forgotten about climbing the mountain at all.

I stopped at onsen, ate at a new restaurant for lunch, and bought food for my at-home sashimi meal which would be accompanied by an Akira Kurosawa film I hadn't seen yet, Kumonoso-jo,"Throne of Blood." It was amazing.

I also got great blue-bird skies to watch the mountains from. Here's our regular friend, Tsurugi-dake below. 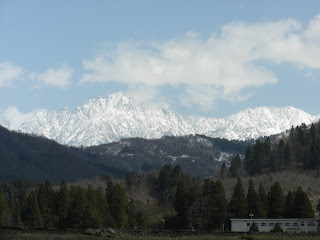 When I got back home, I remembered it was the beginning of spring, and arguably the most beautiful time in Japan. The sakura are blooming, and most people take the time to relax, drinking and picnicing with friends. I however rode to blocked off roads in the mountains where snow can still be found, fighting against myself and impossible nature for ... 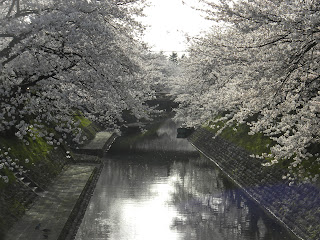