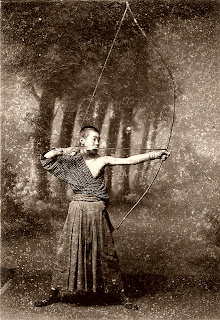 So I asked my kyudo sensei what I'm supposed to do in the draw just before I shoot, and he answered 忍ぶ (shinobu).

If you notice one thing about kyudo, it's that you hold the draw position (会, kai) for a pretty long time, about 8 seconds. For a lot of beginners, or maybe even well-seasoned practitioners, that 8 seconds can last a really long time to stand there holding the bow at full draw. In fact, your arms are probably shaking from the pressure and in your head you may have already finished and want to start the next arrow. This summer during my trip home, I tried archery for the first time and was totally shocked at the lack of time you hold the draw. I found best success actually when I pulled and immediately released. But in kyudo that definitely won't fly.

So you hold the draw for about 8 seconds. In that time you're very slowly breathing out ... very very slowly ... through your nose. You're also looking at the target, and just that with your eyes; not blinking, not thinking, just looking. You're also spreading your arms apart from the chest. This is in fact probably the best answer to the question of: "What are you doing in the draw?" You're spreading your arms apart, from the joints in the shoulders, from the center of your chest and your whole being extending towards the target and equally away with the other arm, as you're also stretching upwards and downwards from your spine.

what the hell are you really doing in that 8 seconds?

My sensei read my question exactly as I meant it (the wonders of a good teacher/student connection), and he said: "忍ぶ, shinobu".

For all of those kanji nerds out there, you probably noticed that the character 忍 also means "ninja." When I talked to sensei about this, he said they shared the same kanji, but what he meant by 忍ぶ wasn't exactly connected to ninja.

There is a more commonly used word in Japanese that has the exact same translated meaning as 忍ぶ, and that is 我慢 (gaman). At face value, or literal translation, I don't see a difference between the two words. However, I do in fact sense a deep difference. At my level of Japanese (or arguably anybody's level of any language) is largely intuitive. I listen to the words, hear how often they are used, see who uses them, look at the kanji, and infer my own meaning from the experience of the word. Perhaps there is an exact and very specific and literal difference between the words shinobu, and gaman, but all I can do here is make the best intuitive guess I can.

Sensei said one must "shinobu" in the draw. I looked up the word in my dictionary and saw "patience", and asked him in Japanese:

"Well, yeah but ... it's also about putting up with a lot of pain. Even if it hurts, you shinobu. Even if you don't to, you shinobu. No matter what, being able to "shinobu" is important."

Sensei mentioned pain, but he's not some kind of masochistic freak that thinks pain is necessary for progress. I don't think this is a conversation he can have easily with all students. I think many would be turned away from the pain, or others would start training until everything hurt. The everyday practice of kyudo is different from this. It shouldn't be painful. But, perhaps this is where the deep cords of kyudo hang down far into the abyss of budo. Down at the very bottom where it is black and we deal with issues ignored in our daily life. Down in a very real place we exist as spirit, where decisions are matters of life and death, and where we must take full accountability for our lives while accepting the void.

To be aware of 忍ぶ, is to walk at the bottom of the kyudo ocean.