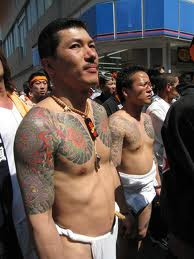 Every Wednesday I am picked up by my sensei in his car and we drive for about 15 minutes to class in the next town over, Uozu. This is a very valuable time for me to ask questions. I try to take advantage of this time by asking serious questions about aikido, Buddhism, and my sensei's experiences, and I even try and do some extra reading before-hand to prepare a question. But lately I've been running out of questions concerning these serious topics. Also, sensei's a fairly quiet guy. He will always answer my questions, and loves to talk about budo, but he's also the kind of guy that isn't used to starting conversations. I haven't tried just sitting through the whole car ride waiting for him to speak, but I don't want to either. So lately, I've been bringing up things that just come to my mind while we're driving.

"I love sushi." He says as we pass a sushi restaurant.

"Yakiniku is OK." He says as we pass a yakiniku restaurant.

I've found that food really is a magical conversation topic. By asking about sushi, I found out that my sensei worked as a fisherman for a few years, making trips from Toyama, around Hokkaido, and down the east side of Japan. If I want to find the best salmon for sushi, then I should go to the Pacific side of Hokkaido. But of course, these conversations can be a bit dull.

Last night as we were on the highway, we passed my favorite onsen, Kintaro, which I have learned my sensei also frequents. At that moment I remembered a curious happening that occured last Sunday night while I was there.

"Last Sunday I went to Kintaro."

"Yeah, and I saw a really strange person."

"I saw someone that looks just like Yakuza. He had huge tattoos all over his shoulders and chest and back."

At that moment I saw sensei's face light up and he was immediately interested in my story, which is in fact true. In my many trips to Kintaro, I've only seen one other Japanese with a tattoo, but it was only a medium sized black and white one on one shoulder, and wasn't quite as extravagant as the large and colorful tattoos yakuza (Japanese gangster) are known for. But this weekend, I finally saw one that was definitely legit. He was a stocky guy, maybe in his late thirties, with a bald head, goatee, and huge tattoos (similar to the ones in the picture shown above). In front of Kintaro, there is a HUGE sign saying "no tattoos", but this man was blatantly walking around without any sign of trying to hide or be extra discrete. The people around didn't make any fuss, or seem to give obviously disapproving looks. In fact, at one point, he was laying outside next to one of the pools, and a cleaning lady walked right by him without saying a word.

Kintaro is a very nice onsen by Japanese standards, and seems to draw a crowd of local regulars as well as hotel guests. Usually it's very quiet, and full of older men. Kintaro is not played up as a tourist spot, or a family destination. It wouldn't surprise me that the onsen tolerates one or two tattooed yakuza who quietly come in during the last hour on a Sunday night. Or maybe it was a huge deal and the hotel as well as the patrons were really upset with this incident. To be honest, I couldn't tell.

Sensei brought this story up after class and everyone was very interested to hear about the experience. A couple of the older members shook their heads and said dame, "very bad. "
I jokingly asked them if they had tattoos, at which they replied "No no no," and laughed.

On the way home, I told sensei that I have been drinking a lot of Tateyama sake lately, and that I was headed to a sake festival in Hiroshima next weekend. I have learned that sensei loves to drink, and every night he has some Tateyama sake, which is named after the famous mountain in Toyama prefecture and is very very tasty. Perhaps this is the cause of his growing belly which is a bit larger than most people would expect for a guy who does so much kenpo and aikido. Anyway, at this comment he brightened up again and he couldn't subdue the large grin over his face.

I will ask many more serious questions about aikido and Buddhism during our car rides, but if I have a story about yakuza or sake, I will definitely remember to bring it up.
Posted by Zacky Chan at 9:19 AM