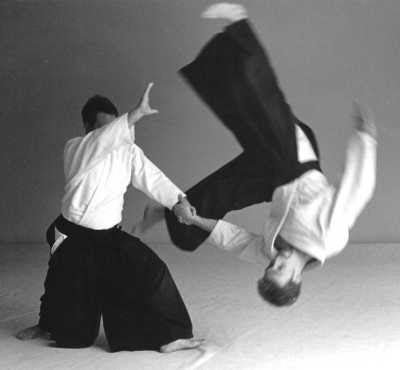 I've been going to lots of Aikido lately, but haven't been posting my "Lessons", but here are a few snipits of information you may be interested to hear.

So, for Wednesday class in the next town over, I usually meet my sensei close to home and he gives me a ride. But last week he said he was going to be late and couldn't pick me up. I said alright, and that I'd see him tomorrow for the next class, and hung up the phone. Then I said to myself, "Wait a minute. I can ride my bike to class." And so I was off for the 40 minute ride, which really isn't much compared to a lot of people's regular commute to martial arts classes. When sensei showed up, he was impressed that I rode my bike, but mostly because I took matters into my own hands and took responsibility for showing up to training.

Also, the past week I've been getting more approving nods instead of irritated scowls from sensei when we train, which gives me goosebumps of excitement.

After that Wednesday class, there was a black belt who showed up I've only seen once before, many many months ago, but after class sensei gave him a certificate qualifying him as a black belt in kenpo. He then went on to give a long talk about something about black belts, but unfortunately, this is one conversation I couldn't really understand. The only bit I got was that, it seems in universities, kenpo classes are very popular, and a lot of the time students will train for the four years they're in college and become 2nd or 3rd dan (degree black belt). Obviously, my sensei scoffs at such a phenomenon, and I think he was explaining it's connection to tournaments and sport fighting. Perhaps there's a lot of politics involved. This reminds me of a talk I had with sensei a while ago where he said that in some other martial arts, the goal is winning matches in tournaments, but the goal in aikido is practicing more aikido. I think this is very interesting, and makes me realize that aikido fits me better than martial arts focusing on competitions. Though I have no problem with competitions, and I do believe them to be great learning tools; as long as its prioritized along with other considerations in the discipline, and not automatically chalked to the top.

Lately sensei and a couple other black belts have been throwing me harder and allowing me to do high falls. (Check the picture above for a visual impression of a high fall). After class, Hosogoshi showed me about 10 different variations for practicing high falls for about a half hour. Unfortunately, I don't think my tatami apartment would handle my solo practice very well, but you can be sure I'll be there after every class on the mat flinging myself in the air.

Ever since sensei met with the 8th dan in kenpo and aikido about a month ago, he was encouraged to have a short "mokso" session after class. This mokso session is just taking a minute after class as we line up in seiza (traditional sitting position), close our eyes, and try to soak in the night's training. I'm surprised we've been doing it consistently for a month after every class, because sensei always seems to feel weird about it, or at least a little reluctant. After last class he was asking people if they liked it, and of course didn't receive any solid answer. But it's funny that some martial artists would consider it paramount to training, while others seem to have to force themselves to do it. Personally, I enjoy it.

Lastly, I have an opinion about getting-on in Japanese society. Japan is famous for it's emphasis on being "polite", and in being so, I think many foreigners come to Japan trying to be as polite as possible in order to fit in. But instead, I'd recommend doing what is appropriate. Japan surely has it's own emphasis on being polite, but to say that one always tries to be as polite as possible in Japan is very far off. Just because saying "Doumo arigatou gozaimashita" is the most polite way to say thank you, does not mean you should say it while delivering a deep bow to everyone you pass. Just do what's appropriate if you want to fit in (which is an oxymoron for gaijin just to let you know).
Posted by Zacky Chan at 6:52 PM