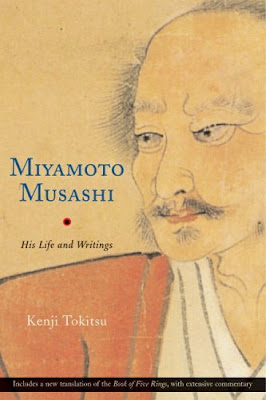 The Book of Five Rings.
I am now reading it again, for what I consider the third time. It was one of the first martial arts books I read, and I consider it in my top three for sure. For this version, I am actually reading it from, "Miyamoto Musashi: His Life and Writings" by Kenji Tokitsu. Here I will give the description from the back cover:
"Undefeated swordsman, master of battlefield strategy, martial arts icon - Miyamoto Musashi, who lived in Japan in the 1600s, is the most famous samurai of all time. His masterwork, the Book of Five Rings, is one of the most insightful texts on the subtle arts of confrontation and victory to emerge from Asian culture.
"Over the centuries, Musashi's reputation has grown to mythic proportions, but, in fact, much about Musashi and his life remains a mystery. Here, Kenji Tokitsu, a modern martial arts master and scholar, turns a critical eye on Musashi's life and writings, separating fact from fiction, and providing a view of the man and his ideas that is accessible and relevant to today's readers and martial arts students.
"Tokitsu provides a vivid and meticulously researched biography and a fresh translation of the Book of Five Rings, along with four other texts on strategy - all with extensive commentary that puts the historical and philosophical aspects of the texts into contexts. Musashi was also a respected artist, and this book contains color reproductions of his own calligraphies and paintings, with commentary by the well-known art historian Stephen Addiss."
Tokitsu's introduction is worth a read all by itself, on the difficulties of translating martial concepts into words. For writer/martial artists, I highly recommend you see how Tokitsu words his way through this awfully sensitive terrain.
As for the biography portion, I am glad to have read it, but honestly, do not remember much of the finer details, and probably wouldn't give it a reread. There are volumes of books about tales roughly based on the legend of Musashi, but this is a rare attempt at discerning what exactly Musashi did in his life. In the biography, we find a wide array of contradicting information from various sources, and Tokitsu's opinions as to which are most accurate. For that alone, he deserves a lot of credit.
I have made it on to his translation of the Book of Five Rings, and though I have read it through before, am absolutley amazed at this rediscovery I'm experiencing now. Many Westerners will be surprised to find masterpieces of Eastern literature to be quite short in length, and baffled by seemingly nonsensical or ambiguous content. One could say that a lot of Eastern knowledge is rather wisdom in the sense that experience comes first, and then philosophy. In order to understand, or rather gain something from the texts, one's own experience is to be considered very personally and subjectively while reading. Then, you put the book down, experience more, pick it up again, and dive deeper into the wisdom. This is beginning be a clear sign to me of - to use the golden word of "Zen and the Art of Motorcycle Maintenance" - quality. Quality friends, art, literature, experience ... each of them should be able to be investigated over and over again over long periods of time and still yield new substantial information. I can think of few better examples in literature than the Book of Five Rings.
So anyway, you will probably see some content from this book over the next few posts on this blog. Here I will share with you Musashi's thoughts on "The Strike of Nonthought" from the Scroll of Water. "The Strike of Nonthought" is translated from munen muso no uch. Tokitsu gives a very lengthy explanation to how he got to this translation, but to me, what "The Strike of Nonthought" is, is the best description of mushin, no-mind, I remember coming across. In Japanese philosophy, you will hear a lot about this mushin and are expected to cultivate it; cultivate action without thinking. Well, at first it sounds really cool, especially while watching an epic battle scene between samurai on the silver screen, reading it in a book from a Japanese guy who lived a few hundred years ago, or hearing it from someone with a long white goatee sitting cross-legged on a cushion with swords behind him ... but then you start thinking about how to make this happen, and it then may become very frustrating and annoying. Since my last reading of this concept of mushin I feel as though I have made some small progress in understanding, and found this to be particularly interesting.
"In a situation where both you and your adversary are just about to launch an attack, make your body into a body that is striking, make your mind into a mind that is striking. Then your hand will strike spontaneously out of emptiness, with speed and power, without taking note of the starting point of the movement. This is the strike of nonthought. It is of prime importance. You will often encounter this kind of strike. You must study it and train in it well."
Get it?
Well, what caught my eye this time specifically was, "without taking note of the starting point of the movement."
Can you move without taking note of the starting point of the movement?
I don't know how to explain this without sounding blatantly obvious or crazy ... so hopefully you can just reread this quote a few more times instead of my own dilutions.