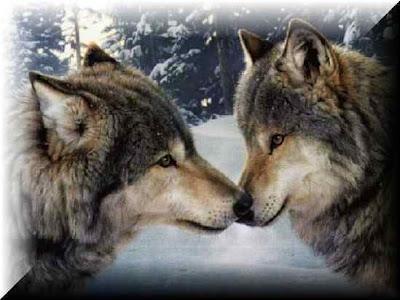 The other day at school, one of the English teachers at school came across a very interesting short essay from one of the textbooks she uses in class. It is a story about a wolf, but one that maybe doesn't quite fit most people's image of the creature.

"During my most recent wolf lecture tour, I did several programs in partnership with Kent Weber, director of an organization called 'Mission: Wolf,' founded to educate people about wolves and to care for wolves born in captivity. I presented my slide show on wild wolves and then Kent explained the purpose of his organization. The climax of each event was the appearance of one of Kent's tame wolves. As the audience responded to the charismatic appeal of the wolf, Kent explained why wolves belong in the wild, not in cages in people's backyards.

"After one of our joint appearances, Kent told me a startling story about the gift of a wolf. He often brings wolves to elementary schools and sometimes speaks to groups of kids as large as five hundred. In some cases, he will allow a tame wolf to run free in the auditorium. The wolf will circle the entire room running at top speed. As the wolf runs, the school children go crazy with excitement.

"Kent began to notice that when a wolf was allowed to run free in such situations, it would almost always pick one child to greet and make friends with. It usually was just one kid out of the several hundred in the auditorium. Curious as to why the wolves were picking out certain children, Kent began to ask teachers if there was anything special about the ones the wolves chose.

"The teachers were astonished at the behavior of the wolves. They told Kent that the boys or girls selected by the wolves were always the worst outcasts in school, the kids everyone else picked on. The wolves had decided to make friends with those outcasts.

"I've been around wolves for eighteen years, and have learned many things about them, but I am not certain why Kent's wolves behaved that way with those kids. If I had to guess, I would say that they may have sensed that those children weren't being taken care of as well as the other kids in teh room. Wild and captive wolves love to take care of pups, their own or orphaned ones. Wolves automatically want to care for helpless, defenseless young creatures. Perhaps to the wolves, those kids were the equivalent of abandoned, orphaned pups, and they wanted to care for them.

"Whatever the reasons for the wolves' behavior, I can imagine no greater gift, from a wolf to a person. Imagine what it must be like for a young child to be a total outcast in his or her school, to be picked on by all the other kids. Then imagine what it would be like to be sitting in a huge auditorium, surrounded by hundreds of people who don't like you, when a wolf is set free and races around the room, finally stopping beside you. At first, the wolf's approach would likely be interpreted as just one more unfair attack, but then the wolf clearly shows that he is friendsly and greets and lick your face and hands.

"Such an experience, such a gift, would change a child's life forever. Whatever unfair or negative things might later happen in their lives, they will never forget that once a wolf picked them, out of all the kids in the entire school to make friends."

Pretty cool huh? Maybe it was growing up a few acres away from the dog kennel my mom runs when I was a kid, but I have always had an affinity for canines, especially wolves. My whole life I've been fascinated by their image, but as I got older and investigated more, I learned that wolves are a lot more than dangerous beasts. According to Native American legends, often times wolves were either seen as scouts and explorers, running across into the unknown creating the world behind them, or more pertinent to this story, healers who take in the orphaned and wounded.

As far as jobs, I've also always been attracted to teaching, and have noticed that when I am with a group of kids, I am almost always drawn to those who are the outcasts; smart, innocent, and disregarded by the majority. Perhaps humans share more qualities with these animals than they may realize.
Posted by Zacky Chan at 1:39 PM