Before I begin my unusual ramblings about eastern religions and martial arts, I will give you a small virtual tour of Gaijin's home office on this fine snowy Saturday morning. 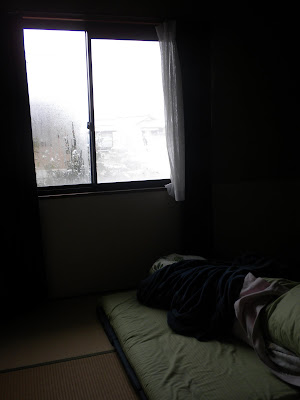 Here's where the great cycle ends and starts everyday; from my lowly futon laid upon tatami mats, covered with an electric blanket of course. I can't wait for someone to invent the "cool-down-anti-midnight-sweat" blanket for the equally harsh Japanese summers. 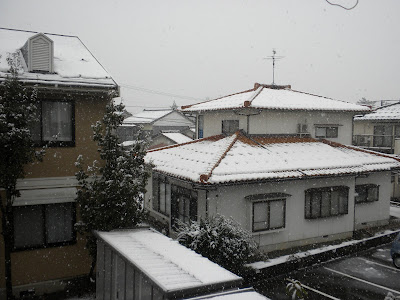 Gah! Looks like other than an adventurous walk to the super market, Gaijin is going to be spending this day happily indoors. That adventurous walk to the super market by the way, is nothing compared to the shopping that goes on inside. I didn't realize it until this morning, but apparently around 11 am on Saturday mornings in the countryside of Japan is when ALL of the obaachan (elderly Japanese women) decide to go shopping. Personally going to the super market is one of my least favorite things I do in life, so it's where I really try to put my discipline and patience practice to work. But this morning among the throngs of obaachan, it's almost impossible; but for very opposite reasons than many of you would probably expect. This is not a lethargic slow moving crowd, but the most vicious grocery shoppers you have ever seen! I was surrounded on all sides like a frenzy of sharks, and if I was going to get any food today, I was going to have to set my fins back and show some teeth. 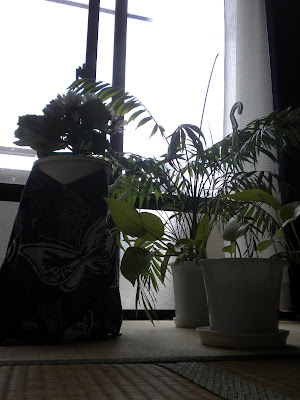 Ah, my best friends. The flowers on the left are the newest members. 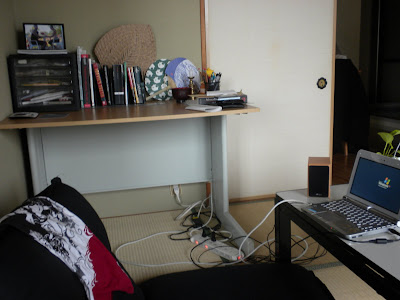 Here it is: Gaijin's home office! Everything I need and nothing more. This is my metaphorical bonsai tree that trimming and cultivating to my image of perfection. 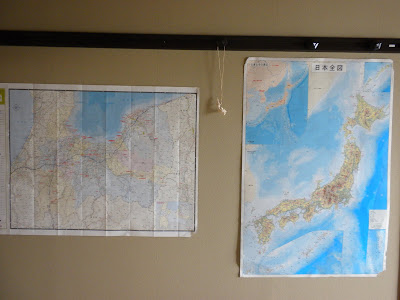 And what would Gaijin's headquarters be without maps. Before adventures, I stand here staring at these posters on the walls with a cup of coffee in hand, planning the next mission into the unknown. On the right of course we have a map of Japan. My home prefecture of Toyama is located in the middle and on the left on the Sea of Japan side. A pretty ideal central location in my opinion, except that I am pretty well cut off from everything else by huge walls of the tallest mountains in Japan, can't complain though. On the left is a map of Toyama Prefecture which is very useful in my summer time bike trips. But actually my most important map is taking a rest for the winter. It is a topographical map of the Northern Japanese Alps, which is basically Toyama, southwest Niigata, and northern Nagano and Gifu. For big hiking trips and summertime biking adventures, it is absolutley invaluable. 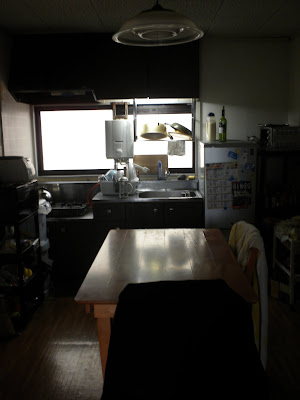 And this is where I go when I put things in my mouth when I get a funny feeling in my stomach. I do pretty well with tea, beer, and wine, but still don't quite know how to make that food stuff taste good.
Well, there you have it. For the relatively small amount of space this apartment has to western counterparts, it's a palace to me. Another one of the saddest things I'll have to say goodbye to when I leave Japan. This is one aspect of life here I really lucked out on. 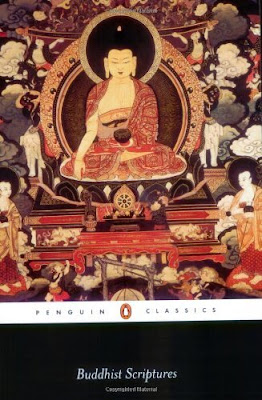 Here I will give a brief introduction to my latest focus of study in eastern philosophy, "Buddhist Scriptures" of the Penguin Classics collection. I am very excited about this one, and am going to do my best to not rush through it. It's funny, I'm not sure if this is the best book I've ever read about Buddhism, but it's effecting me more than any other already. So far, I've read the lengthy introduction, "the Five Realms of Existence" perhaps written in Cambodia in the fourteenth century, and "Arouse Your Mind and Practise!" written by the Korean monk Wonhyo in the seventh century. I've been interested in eastern esoterica since I was a child, and started reading seriously after an Ethics class I had in college. Since then, I've studied eastern philosophy mostly through martial arts, but recently, have been focusing specifically on Buddhism in the books I've read lately (which you know all too well if you've kept up with my blog lately). My experience has been different from other modes of study where one often progresses linearly forward along a path, and rather like diving into an ocean, deeper and deeper with each chapter. The more I read about Buddhism, the slower I read and the more substance I soak up. This is less than simply the volume of material I've read about Buddhism, but more about my experience in martial arts, experiments in meditation, and constant application to daily life. This is why people will often say the "experience" of Buddhism instead "study". Now, I find it hard to read more than five pages of this book without missing some drastically significant idea I must internalize before moving on. Below is a short blip I found interesting. It doesn't belong to one of the old texts, but note from the editor.

"It is a common tenet of Buddhist traditions that human life, or more specifically rebirth as a human born with access to the dharma, is very precious; something difficult to find and, if found, of great meaning. In a famous passage, the Buddha described a single blind tortoise swimming in a vast ocean, surfacing for air only once ever century. On the surface of the ocean floats a single golden yoke. It is rarer, said the Buddha, to be reborn as a human with the opportunity to practice the dharma than it is for the tortoise to surface for its centennial breath with its head through the hole in the golden yoke. ... Thus, that one inhales after exhaling and awakens healthy from sleep is fantastic."
One can draw many interesting thoughts from this paragraph, but one thing it made me think about is having a rare chance to practice quality martial arts. So much needs to be said about the groundings of honest effort and personal internalization when practicing martial arts, but one could spend their whole lives practicing without developing true martial ability. There really is only so much we can do on our own, and in order to best overcome our limitations and find new ground, a quality teacher is needed. Buddhists will often say that we should cultivate ourself by intelligent means. A disciplined and honest practice is necessary, but without this crucial ingredient of intelligent means, progress can be painfully slow. I like to think of myself as that tortoise in the ocean who has found a golden yolk with all of the wonderful teachers I've had. Without them, who knows what weird s&^t I'd have convinced myself to do to practice martial arts. I'd probably be in a back yard with a towel around my head chopping through the air: "HIYAHHHHH!" Instead, I get to do a more highly refined and widely accepted version which may be able to help me in a real physical situation ... because of the help I've had along the way by my teachers.
That rambled differently than I expected. Perhaps it's just important to read what the expert wrote about Buddhism above, think about what that means to you, and then try and think of something else.
Jaa ne.
Posted by Zacky Chan at 12:59 PM