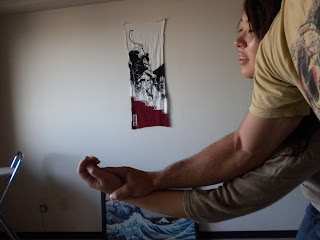 This is part of a move in aikido called kotogaeshi, and there are a lot of intricacies involved. Three I'd like to talk about are elbow placement, points of contact, and angle of the hand. 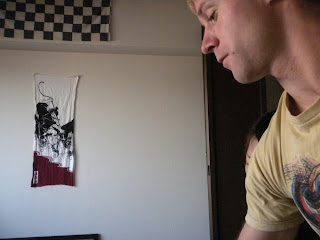 Ah, the concentration. How can I show this technique, take a picture of it, and not concentrate too hard on the pretty girl. 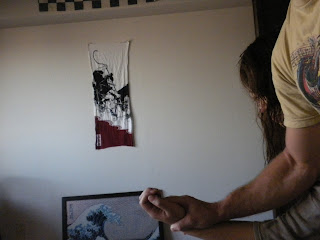 Anyway, elbows. When doing this technique, it's easy to just grab your partner's wrist and swing around pulling them by their wrist, but that puts you in a weak position where you'll probably be relying on muscle strength or your partner's lack of skill. To prevent that, we need to find ourself in a position where our elbows are above our partner's. This is apparent in a lot of different aikido techniques, and is one of the gems Sensei is always trying to get us to focus on, but it's one that usually isn't remembered or at least executed. If your elbow is in the right place as tori (person executing the technique), then you can be in a comfortable position of strength without relying on muscles and your opponent will be forced into one that's compromised. 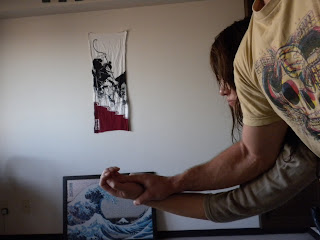 But first, points of contact need to be correct. (This is actually one part that hasn't really been explained to me, but I'll try and interpret it from all the times I've felt and seen it). The focus of my intent is on my hand, particularly the base of my palm next to the wrist. According to the pictures, it's actually best two pictures before this text. My hand should be such that my fingers raise up a bit, placing the base of my palm close to the wrist pushing downwards. If my weight is relaxed, this point will bear down on the partner in just the right place: the first quarter of the partner's arm towards the wrist. This point on the partner's wrist we're talking about is huge in the aikido my Sensei does; a point on the body with great potential. Usually we focus on this point as the person executing the technique (me in the pictures) as a point of contact and a place we keep heavy to bear down on or guide our partners through techniques, but here we focus on that point of strength in the opponent and use it against them. Proper uke is executed when you are mindful of this spot and don't let your partner break that part of your structure down. 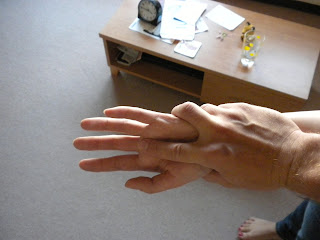 Then the hand. Our index finger should be such. Also take a look at where my hand is (the one on top), the base of my palm is on my partner's arm arm about a quarter of the way from the wrist. 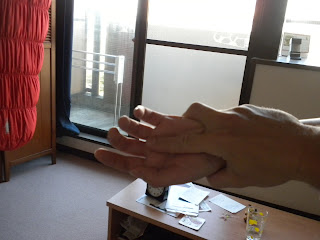 But we we don't just have our hand flat-parallel with the floor; it should be at an angle. As I follow a horizontal circle with my hand going in the direction of my index finger, there should be a slight angle just like a train going around a bend. The train, or car, or any such vehicle, doesn't take turns staying straight up, but goes at an angle while making the turn. Our hands should be like this. It can be really uncomfortable for the partner to keep their balance or take control of the technique.

I'm not sure how you do kotogaeshi, but these are a few of the details we focus on considering hands and arms.

I have to say that I don't see myself doing this perfect in any of the pictures. I've done this technique hundreds of times, and putting special effort into making it accurate in a still position, and I still can't get it right! I'd say that's a testament to the time it takes to become a skilled aikidoka. These are not techniques you see and do and BOOM it's perfect. It takes time. But here's me in a funny position in this funny place and time. I'm also unsure of my descriptions, but I don't ever know exactly what my Sensei is saying anyway! Haha! Maybe my aikido is more like interpreting a piece of art rather than analyzing an engineering manual.

I'm going to aikido about four times a month now, which is not very much. So when I go to practice, my whole being is like a laser, focused on what Sensei is doing and what he wants his students to do. There are a lot of shortcomings that go along with my recent infrequency, but one thing I've noticed is a heightened sensitivity on feeling how much people struggle, use muscle, and grab (negative connotation here) throughout techniques. It's too much in the wrong place. There's also a lot of stops. When Sensei does a technique, he is incredibly strong, but this has to do with body placement and weight distribution, not muscle. So if you're using extra muscle in the technique ... it's not it, and so it's not so wise to keep doing so. Sensei holds on to you with grabs and locks through techniques, but he never feels like he's really grabbing you. Again, negative connotation. He's not excessive. But many people, probably due to concentration on doing a technique right, often are way too grabby. This is also not good technique, and annoying for uke. Sensei is also fluid. When he does a technique, it is not broken up or especially emphasized in one aspect (unless he is trying to show something specific). His move is one fluid motion. When learning a technique, we may often stop, make it choppy, or over emphasize one part. This is part of the learning process and necessary to an extent, but I try not to do it so much when I come to class and rather make each technique one fluid motion.

Sensei will point something out if it's done wrong or can be improved, but he doesn't nag. If he commented on every mistake that happened in his dojo, he wouldn't stop talking. So I see sensei watching students and going through ukemi, and I've identified a very specific look on his face. A face probably accompanied by the thoughts, "I wish they'd just relax, stop being so grabby, and do the whole technique."

90% of my efforts in aikido class are based on getting the opposite reaction out of my sensei. It's a very slight nod and an short utterance of "OK."
Posted by Zacky Chan at 8:29 AM