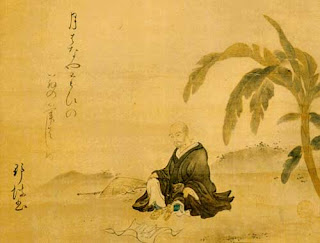 And niether do I.

In fact, I probably know a lot less about Basho than a lot of the readers. But I know enough about him to know that he's got way better stories than the haiku he produced; those writings that made him one of the most famous figures of Japanese culture. What we read are jewels of art that have been remarkably preserved and elaborated by other people on the path. By reading his work, and indulging in such imaginative exploration, we are taking part in his life, and everything in the universe at the same time, but while we endeavor, holding his name to ourself, we are doing something else. It is no longer the man that lived named, Basho. At least that is what I've done; guilty and fortunate enough to have woven my own fantasy which is arguably real. It is the unexplainable and truly unbelievable dichotomy of life that Zen Buddhism focuses upon, and while I am fascinated more by the products of this religion above all else, I continually forget the physical truth of existence of these seeming freaks of synthesis created by the unfathomable. Is Basho perfect? Ideal? Something to be thought of with a genuine smile?

Are you not yourself?

Our own tragic death, or worse, our own betrayals are all part of everyone's mutual enlightenment.

Tonight what Basho never said is much more interesting to me than what he ever did, and I don't even know the dude. This strikes my heart more than most of the things happening in my daily life. What strange creatures we are. I am growing weary of the puritanical crusades which alienate myself from those things in my life that are burning next to the fire, suffering from my neglect. And yet returning requires me to throw others in as much to perish: execution. The world is a burning fire of sacrifice. Some seek to extinguish the fire, but that said so plainly is just the same. It's all sacrifice. What's the difference?

A lot of you are martial artists, I bet you have a good idea ...

What kind of intent gets you through a technique?

Wow, I've already gone too far. That last string of words sends a chill down my back, as if conviction alone is enough to condone our activity. Obviously there are a lot of other factors involved like sensitivity and knowledge and compassion. But even with such enlightened characteristics, in the end, aren't we just following our conviction? If not, what is left?

Ha, I just can't see past two shades. You see what I have to deal with?

Sensei tells me he's still learning, though he's never said this before. I still don't get it. My ignorance is so goddamn persistent, not unlike my oribobo wild boar figurine I have recently welcomed into my house. He stands there over his pile of gold, tusks and hair and all. No words will move him ...

but maybe a treat would? Some kind of" skillful means" perhaps ...