The darkness at the bottom is quiet.

The light above is piercing bright.

We are engaged by the myriad creatures and landscapes on all sides. 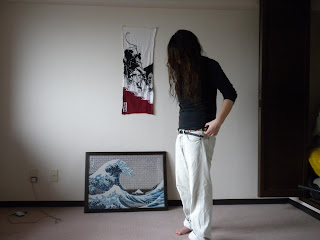 Here is my partner who will soon succumb to the power of elbow stacking! 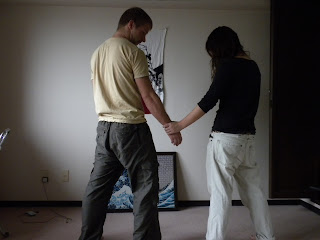 In my last post I talked about how we often practice kotogaeshi and I received a comment from someone saying that they have never seen it that way. I'm not sure what particular the comment was directed towards, but here I'll show another example of a technique that utilizes one of aspects I talked about in the last post: elbow stacking.

Actually I'm not really sure what it's called, if it's got a specific name at all, but that's what I'm going to call it until I hear a better term. Anyway, elbow stacking. It's where the tori (person doing the technique [me in the picture]) positions their elbow either directly above or the below their partner's for an advantageous position. In this series of pictures, elbow stacking is utilized in tenkan undou, which is more of just a warming up excercise than an actual technique. We do this everyday after stretching and before starting techniques. As I said, it's not really a specific technique, but it's a movement we use in A LOT of techniques. We start from the position above where one partner grabs the other's wrist. 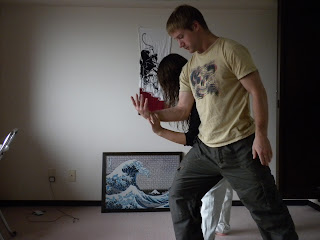 The tori pivots on the right leg (stepping forward if one must for optimal position), and swings their left leg around to the outside, away from the partner. From here, a lot of techniques can be used, but for the purposes of the tenkan undou, the partner steps with their right foot to bring them back in front of the partner, pivots on it, and starts another rep by grabbing the other hand. But what I want to focus on here is the position of the elbow. Tenkan undou has a lot of small details one must be mindful of in order to do it well, but it seems that this elbow stacking is the key to its success. I say this because the purpose of this technique, and arguably all aikido techniques is kuzusu, putting one off their balance (while maintaining good posture yourself). 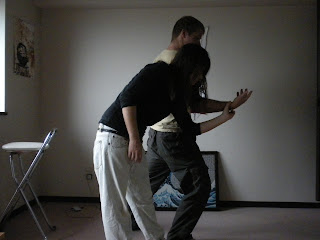 Here is the same technique seen from the other side.

That last line is very important, and something really hard to get from pictures and explanations. First off, this is a practice that is the beginning of techniques, and is not necessarily a technique in and of itself to be used in a self defense situation; it is a transition that moves into another movement. Secondly, this should be executed in one full movement without stops. You can break it down to some extent as I have in the pictures, to show certain aspects or teach or learn the movement, but it's effectiveness is broken down with the stops. This also doesn't mean you start the technique from a wrist grab. Ideally, it's started before contact. As one partner reaches for the wrist, movement has already started and the partner does not wait to "start" the technique upon contact, but just slightly begins movement to set up the technique. Also, as with most aikido techniques, it requires a specific movement from the partner. In this instance, it requires the partner to maintain a substantial (not necessarily strong muscle exerted desperate grasp, but a soft/strong grab) throughout the technique until the end. To many that may seem foolish because someone would never hold on to the wrist through such a movement, but would instead let go. Well, if they let go then you should do a different technique. Also, it could be argued that if performed in a fluid movement with an honest attack from the partner, the partner will be put off balance and maintain the grab in order to find balance, and thus feed the technique even more to the tori's advantage. Instead of letting go, they'll hold on more desperately! But I'm not that good, and such discussions will have to be further explained in a post far into the future.

For now, this small detail of elbow stacking.

It could be said we are all on a path, partaking in a journey, headed in some direction. Recently I have been reading a book called, "Visions of Awakening Space and Time: Dogen and the Lotus Sutra" by Taigen Dan Leighton. It's a great but intense read, one of those where you read for a half an hour and then realize you've only gotten through about 8 pages, and is acting as some sort of mysterious gate to reading Dogen's most famous work, the "Shobogenzo." I started this specific path with martial arts by practicing Karate where I started a fascination with Zen Buddhism, but always read about it with respect to martial arts. Then I began exploring other Zen-esque philosophies as their related to cultural arts in Japan, and then finally made my way to read Shunryu Suzuki's, "Zen Mind, Beginner's Mind," which was an apex of sorts in this quest. I've been reading some various books about Zen, but I feel as though I'm delving much deeper now, and am approaching what it is I've been looking for for so long, here standing at the first gate of the Shobogenzo.

But then there's all this other stuff that keeps coming up like work and bills and responsibilities and obligations, and then all of my other remedies and solutions and distractions accompanying them, and then whole other realms of love and accidents and surprises. It's so important and so fragile, this adventure of study that now brings me to Dogen.

I wonder what would happen to this part of my life if I just let it all go. Nothing and something I imagine.
Posted by Zacky Chan at 3:11 PM