Lonliness on the Budo Path 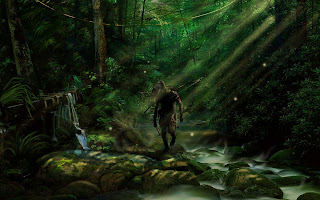 This morning I realized I practice martial arts to interact with people.

However, it is one of the most isolating interests I have.

My life is very big. Let's say it's a 360 degree circle I am standing in the middle of. Standing there, I cannot see my whole life. I can only see what I see, and that is what is in front of me. I know what is happening in front of me because I can see it, and I don't know what is happening behind me because I can't see it. There is nothing else in front of me other than what I see, and anything can be behind me because I can't see it. I could spin around in attempt to see everything at once, but there will always be a "behind me" that I cannot see. I could sit and close my eyes in attempt to subconsciously "see" everything around me, but that is nonsense; I would see nothing but what my imagination manifests. So, I can only see what is in front of me.

I consider myself a fairly normal and healthy human because I like and try to spend time doing those things that I like. So, of all the things that I can see, my attention naturally drifts towards what I like. That area of "things that I like" is a microcosm of my reality. In that area, there are many different things that I like, and even some things that I don't like. Of the myriad things that I like, I could make one great polarizing distinction by separating everything into things that incorporate other people, and things that have nothing to do with other people. (Though I have to mention here, that in this 360 circle world I am describing, there is no area of complete lonliness or complete anti-lonliness, and often the disctinctions we can generally call alone, or not alone, can often be interpreted conversely as their opposite.)

However, this is often a very small part of what I see. If viewed from the other side, that one of social obligations, martial arts become a lonely world where one must practice in the shadows of isolation. My world encompasses many different types of social interaction that I am supposed to like. I am supposed to like my coworkers, varous other acquaintances I meet regularly in shops, even people I don't know. What really gets tricky is that I am supposed to like the friends that I have, those whose initial purpose in my life was precisely to be enjoyed. They are separate from the martial arts, and so to them, my martial arts world is dark. This is no little thing, because in my favorite world, martial arts is king. Through this dichotomy I move with difficulty, and my stamina for the world separate of martial arts is not so enduring. In that social world, my focus is incredibly distracted, as well as everyone else's. The more the merrier? More like, the more the fuzzier and disparate. Intimate conversation is limited to small random snipits amid piles of fart jokes. Skill is determined by domination of others through witty rapport and social manipulation. Physical excercise designated to 10 minute periods of frisbee or swimming, niether of which are to be done at full exertion. Change and happiness to be found in mood altering substances.

Now, this world looks pretty dark, and some of you may be thinking, "Dude, you should get some new friends!" but that is not the case. I love my friends and enjoy what I do, but sometimes it carries this feeling, and because I think it, it is real. Anyway ... enough of the disclaimer and back to the discussion at hand ...

My martial arts world is one considerably different from the main circle of friends I frequent. Because my friends haven't visited that world, they don't know anything real about it; only what the media produces through Hollywood movies and video games. I don't look like Bruce Lee or Jean Claude Van Damme, so this is strange to them. Because they don't know, they don't understand. Because they don't understand, it's usually met with guarded views. Those guarded views make transitions between worlds very difficult. This is the exact reason why I practice martial arts: to be able to traverse new worlds. If I can make my mind sharper, my body more able, and my will stronger, then theoretically I can be functional in different worlds, namely those more difficult to endure or understand. Now, after about 7 years of practice, I see that those desired effects have come true, but I've rarely noticed it until now because I'd say most places in 1st world nations don't require such a high level of ability. I went to college ready for the world and found that the most highly acclaimed experience is getting wasted at a party or club. The pinnacle to many was ingesting drugs and doing ... what? I've also been to concerts to see incredible artists, and yet, all I'm doing is paying a lot of money and time to go stand and listen to something. Now I pay a lot of money and time to go on camping trips where I sit in a beautiful place in a chair and wait for meat to cook. Are these the pinnacles of human experience? Paying money to receive beautiful places, skillful art, and delicious food? In a world where that is true, I feel uneasy. Lately I've been looking around at everyone around me at their respective jobs and 98% of the time I think to myself, "Wow, I would hate doing that."

I want to work hard and become something great. I'm young, white, American, and male, does society have an answer for people like me. YES! Skilled professions requiring higher education.

That sounds like it involves an extreme amount of money and time. A lot of lonely time reading complicated texts I may necessarily not be so interested in, and a lot of social time with people I didn't necessarily choose to be with. I already have to fill up my time and money on things I don't necessarily want. I'll pass.

It's funny. Every once in a while I'll be riding the train and a fairly young intelligent male will start a conversation in English with me. I'll soon learn that they are engaging that highly respected world of specified professions and concerned about living a full life.  Computer technicians, robotic engineers, molecular biologists. I ask them about their lives and compliment them on their achievements. They ask me about my future and I tell them that I'm not really sure. Furthermore, I don't really care so much. I am living in Japan to practice Japanese. But these Japanese are already practically fluent in English and have other professions they are addressing. Foreign language seems like something that you should just know on the side. So the fact I'm learning Japanese doesn't seem so interesting to them. My interest is martial arts and hiking, but these are things unrelated to the innovative technologies that are defining the modern world; more a hobby than what one should devote their greatest efforts towards. And it doesn't make money. That is always where the conversation ends, and I think they eventually pity me in a way. But the feeling is mutual. For us, we who have such high ideals on the meaning of worth and happiness, will sometimes have difficulty with others who feel the same way but translate it through different means.

This professional world that society puts on a high shelf, just doesn't interest me. I don't judge it negatively, it just doesn't correlate enough with what I like. Unless you're rich and famous, I don't think martial artists and hikers are so important in their world either.

"What should a human do their life?"

The professional world says get a Ph.D.

My friends say sit down, get a beer, and say something funny.

Riding a bicycle up a steep hill or carrying a heavy backpack up a mountain just doesn't have much place in this world. Concerning budo, learning how to manipulate someone physically or utilizing archaiac weapons to achieve the same purpose isn't so popular either.

Let's go back to the 360 degree world I'm standing in the middle of. There are people that I can see in front of me. There are people I like, people I don't like, and people I don't have much of an opinion for. Of those people that I like, my favorites have been martial artists. Because of them I have continued on this budo path. I call that beauty. Where do they fit into the world? I don't think any of them have Ph.D.'s, and none of them spend all of their free time just watching the world in a lawn chair with a beer in their hand. However, they are all incredibly intelligent and know how to have a good time. In society's eyes they are probably incredibly normal people dwelling somewhere in the middle. None of them have been very rich or famous, but in their respective worlds of martial arts, life is unimaginably full. It's not that having a respected degree or big money are undesired, but there's just not enough time, and a big part of life seems to be choosing what we do with the time that we have. I generally choose to do what I like, which is exploring mountains and practicing martial arts, so I guess in one world I'm lonely, poor, and uninteresting.

The end of summer is in sight. My friends are busy scheduling camping trips with the remaining extended weekends, but I already have plans:

Nothing is going to mess with these plans because I love them very much.

When my friend's are sitting in their camping chairs I wonder if I'll be mentioned. In the mountains and dojos, I will think of them fondly.

Man, I can't wait to start consistent practice with other people again and get out of my head a bit. I guess I miss my budo friends.
Posted by Zacky Chan at 5:17 PM