When Aikido is More Work Than Work 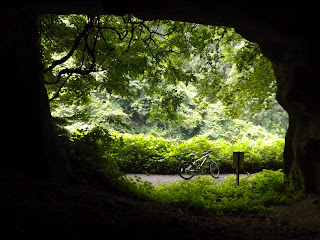 Summer is absolutley the worst time for aikido. Actually, I'm convinced it's the worst time for any martial art. A combination of beautiful weather, summer events, and friends who don't fill their free time with activities that depend on consistent practice all make for a difficult time in getting to the dojo. I've been able to rationalize setting aside that 6:00-10:30 pm block of time for budo on a regular schedule during other times of the year, but it inevitably suffers in the heat. What should we do? Abandon our practice for the immediate callings of now? Or devote ourselves more intensely to our art shutting all else out? I used to think there was a "right" and "wrong" answer, but have come to realize that we in fact create the answer, and "right" and "wrong" are only involved if you allow them to be. 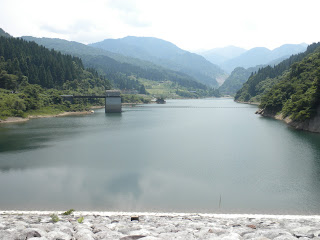 Monday day off. My one day off sandwiched between two four-day-periods of "Summer School", intensive courses for the children's English school I work for. One of those experiences that seem to make people say, "Fuck it, I'm doing exactly what I want on my day off." For some people this means sleeping as much as possible and watching lots of TV. For others it means utilizing every second of daylight for physical activity. Both are worthy reactions to heavy work schedules, I just tend to choose the latter. I had plans for a long ride into the mountains and then go to aikido. 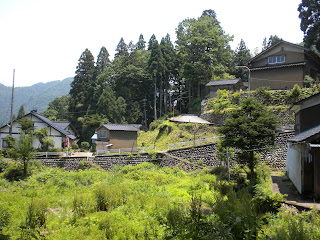 On the train home the night before, I got a text from another English teacher who lives in the same building. She wanted to go out for a drink to celebrate our halfway point in Summer School. I had already been thinking of how to walk into my apartment and fall straight onto the futon for as much rest as possible before my adventure, but I really couldn't refuse such a request; especially since I rarely do so with the people I work with. (Perhaps another topic worthy of a blog: Self-inflicted lonliness on the budo path) I went out, and long story short, I spent more money and got less sleep than I had hoped for ... oh well. These days off also have a way of destroying inhibitions concerning the little things. This event did push my morning departure an hour and a half later though, which may or may not have changed the entire trip. 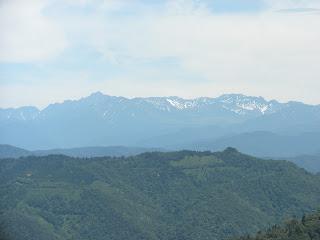 The next day's adventure was an epic journey; just what I wanted. But in a sense, one full of a lot of "failure". The biggest of which was the failure to decide fully what I was going to do with respect to aikido. Theoretically, I could go on an all-day adventure and make it back in time for aikido. Practically, this is a horrible idea. First of all, my body physically can't take it while maintaining a good mood (perhaps a topic worthy of another post). I've done the summer bike ride followed by aikido when I used to live in Kurobe, but I am lifeless and usually have some kind of stomach ache because I didn't eat enough or I ate too much while my body is trying to adjust to the heat. Secondly, the bike rides I used to take would last about 6-7 hours, whereas now they run 10-12 hours. "Why don't you just take a shorter ride?" one of my coworkers says. Yeah ... that's not going to happen. Thirdly, what really kills the bike ride + aikido equation is the commute to training. Walking 15 minutes to the train station, riding for 30 minutes, walking 20 minutes to the dojo, followed by a return trip just as long, kills it. No one wants to be a soggy baked potato for an hour train ride. If I was really being nitpicky, I could complain about the $15 cost as well. Even on regular days, this taxes my mind: 4.5 hours and $15 for 1.5 hour training that I already pay monthly dues for. Well, if training in aikido is really what you want to do, then you should just bear up and do it right? 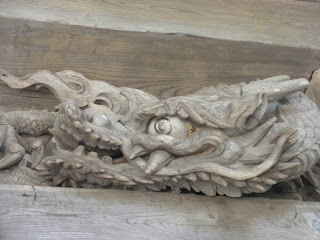 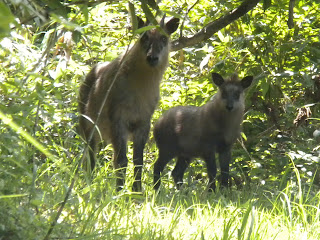 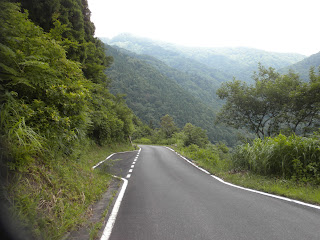 I think it's hard for people to accept martial arts into their life as just a hobby. It's got something to do with the standard of perfection: Utilizing everything to achieve a goal, aiming for "mastery", kill or be killed. I don't know exactly, but the tendency is there. If work, like your job, is something that you have to do to live in society, then martial arts becomes something like super-work. You can have your job, lose your job, but throughout, if you want to master martial arts, you have to always be practicing. It has to be as much as possible all the time if you want to be your best, right? I think we can see a lot of problems with this mode of thinking, but the one that resounds most with me is that, it's just not fun anymore. I really want to go to aikido, but I REALLY want to go on a bike ride. If I'm going to spend my day doing exactly what I want by going on a bike ride to the mountains, forcefully shoving other plans into the equation just ruins all the fun. If that's the case, then screw perfection. It's kind of like, "Hey, if you want to master the sword, then you should practice the basic downward strike 10,000 times a day. But I want to super-master the sword, so I'll do it 20,000 times! YEAH!" Doesn't sound like much fun right now. 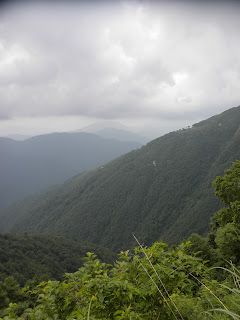 So I've become familiar with this quandary of how to fit aikido into a days off like this, and pretty much have it reasoned as set out above, but I still wasn't completely convinced at the time of my last ride. I set out that day 90% sure I was going to skip aikido. I tried to keep the prospect of going to aikido in a small corner in the back of my mind, but unfortunately, it was an ugly super-work monster sitting on my handlebars staring at me all day. "Man, that mountain looks really interesting, but if I go then I definitely won't make it back in time." "Whoa, look at that onsen, but that will add another hour and a half probably." Each major step along the path was marked by looking at my watch and contemplating an early return for aikido. I think I physically went all the places and did all the things I would have done even if I hadn't been worried about making it back to aikido in time ... but those thoughts were a big waste of time ... or at least they weren't fun. In the end, it didn't matter anyway because I didn't end up going to aikido, though interestingly enough I made it back in time to be able to catch the train if I wanted. 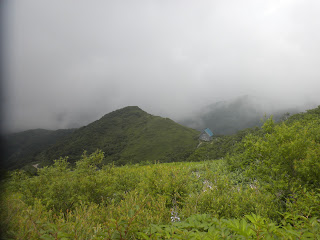 That day's trip was particularly far away, and included a lot of flat land riding through towns. I don't like this. But it usually isn't so difficult and is just a pain in a time consuming way. So on the return, when I reached what I would call the beginning of the home stretch, I stopped at a conbini (convenience store) for a road beer. This was a kind of subconscious sabotage against aikido, and would make me 99% sure I wasn't going ... but there's still that 1% lingering. Anyway, riding my bike through the town's extremely ill-maintained sidewalks while trying to drink a beer was really unpleasant, so I stopped to enjoy it in front of some apartment complex. I sat on the concrete next to a small stream and stared up at the clouds which was incredibly relaxing. Hot summer afternoon after a long epic ride, drinking a beer in an unknown place ... heaven for me. But what about when you finish the beer? When the music's overrrrr ... Shit, I need to get home. Oh well, saddle up and just get through it. Let the beer's effect on your mind put you at ease and just cruise home. Well, along with an elated mood, the beer also made my legs feel like rubber. By drinking that beer, I told my body "Congratulations! You did it!" But then my body said, "Then why the hell are we getting back on the bike?" 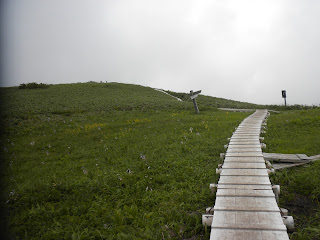 Well, the return reminded me of one of my absolute least favorite things about Japan: the roads. I don't mean the conditions of the roads, they're usually very nice. It's their ... roundabout way of getting places, probably due to the fact that the towns are centuries older than the roads, and there's 10x as many people and things as back home. I was in one major city, trying to get to another, one could easily draw a straight line between them on the map, but you can't just get a straight road there. You wouldn't believe how many times I'd be on a straight road headed directly home, and then all of a sudden it starts veering off to the side. "Whoa whoa whoa, what the hell!" Then I'm winding around small hills, ones that feel mountainous after 12 hours on the bike, faded by beer, and still thinking about making it back in time for aikido. Certainly some form of hell. 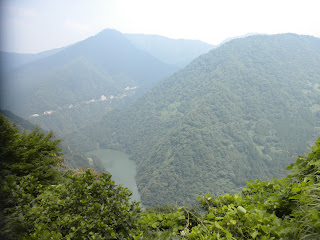 This ... is crazy. My mind is in knots. I'm Thesus in the Labyrinth with my string trying to find my way, but before I know it, the Minotaur shows up in front of me. I find myself fighting, but all I want is out. 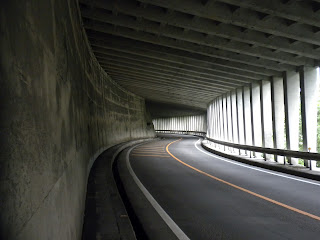 I'll take a leap and say that this is some kind of addiction ... addiction to excess in the things I want and the struggle involved. A megalomaniacal pursuit of what I consider to be the good life, further provoked by the rationalization that there is nothing standing in my way. Perhaps I love the beast that is too big and hairy and nasty for me to even see ... and it's probably getting bigger. I want to change, and yet am skeptical of it's absence. 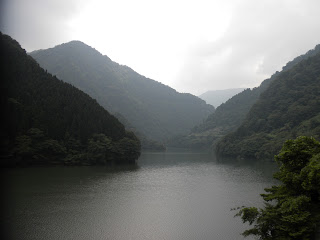 In the end of the day, I got home and watched a movie accompanied by bottles of Asahi, and got a long night of sleep. It was a painful day of riding in many ways. I won't let all this processing go to waste. 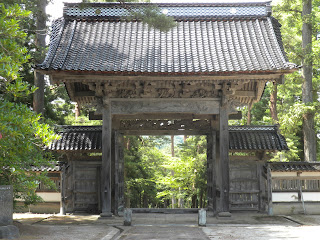 I learned some huge lessons that day: 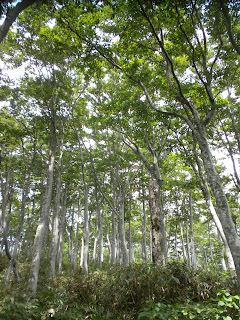 1.) Don't underestimate the ride from Takaoka to Toyama.
2.) Don't drink beer until the end.

3.) Don't try to go to aikido when I do these day-long bike rides. 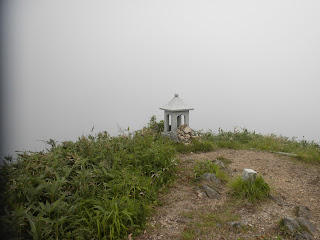 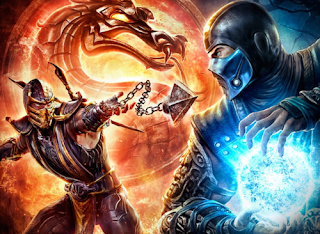 When I was a kid I used to play a lot of video games. Two of my favorites were the Legend of Zelda, and Mortal Kombat. Not only did I enjoy playing them, but the stories and philosophies behind them captivated me, and have continued to do so years way beyond playing them. One could say a large part of my motivation to learn martial arts can be found somewhere in the thoughts of Mortal Kombat. The same could be said for exploring new lands and going on adventures with Zelda. 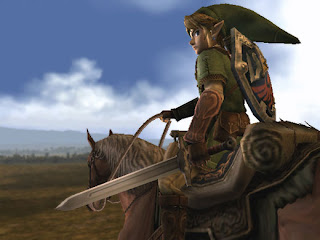 I guess Zelda always was my favorite.

(The pictures in this post were taken from the bike rides I've taken this month.)