At two months of traning I've learned to stand by myself and shoot at the target 99% sure I won't send an arrow flying over the roof of the dojo and into the nearby park. It's not that you couldn't learn to do it quicker, but this is my experience. This simple of act of shooting a bow and arrow in the tradition of kyudo requires a lot of skills that need internalizing. Like there's so many little things going on, you really can't just say, "OK, stand there, look there, pull the string, aim at that target, and shoot." It's not like that at all.

It's kind of like aikido in that you don't worry about getting all of the details at once. In aikido you get to a point where you can manage through techniques with others and then slowly work on the little details over a long period of time. As a millionth degree black belt, I think you're still going to be working ikkyo, one of the most basic of techniques.

The difference with kyudo is that you don't have a partner who can help you through a technique if you don't do it perfect. In kyudo, you're the only person holding the bow so its all on you. Also, in kyudo you're only doing one thing, and that's shooting at a target at a standard distance and height.

The thought of doing that same one thing over and over again until the very end is a bit ... something. As a beginner, this is realy hard to imagine. In other arts you practice something until you can do it well and then you're teacher will show you something new. But in kyudo, no matter how far you go, you're still just shooting at the target (as far as I know). Some say we're never perfect in our technique. I agree with this. As martial artists we reflect with this thought in mind. But man, kyudo focuses on this point.

Now when I practice shooting there are specific problems I need to assess in order to improve my shooting. There are so many of these problems that I think kyudo will be like this for quite a while. Maybe it will always be like this. I imagine it changes, but I can't see that from here.

A lot of reading material I find about kyudo is spiritually oriented; one could say the same about aikido. However, my experience in aikido for the past two years has been extremely practical. This has changed my perspective on the arts. It was largely due to the spiritual aspects in aikido that interest was sparked, but when starting to learn and practice the art, those spiritual aspects only seemed to get in the way of learning technique. I don't consciously think about the spritual aspects of aikido when I practice. My creed has been to watch Sensei and do exactly what he does. This I believe is the best way to "study" martial arts.

So, this is naturally the mindset I've brought into the kyudojo. It seems to be working well and my teacher appreciates it. Funny thing is that the friend I started kyudo with is completely into the mystical side of it all. As long as it helps you it's good I think, but I've noticed that it often gets in the way. For example, there is one analogy related to the pulling back of the bow. After lifting the bow in front of you, you push and lower the bow in front of you with your front hand, and pull the string and arrow back over and behind your head. The resulting arc can be related to a rainbow. However, if your hands do this in attempt to make a circular arc, your wrist that holds the string may bend excessively, which isn't good. If you're wrist is bent too much, it means you're pulling with your hand and wrist instead of your elbow and chest. Rather what you should do is just pull the string in a straight line from beginning to finish, and it will naturally arc. The final product looks like a rainbow, but trying to imitate a rainbow in practice disfigures correct form. I think the most important thing to realize is that you are not a rainbow. You are a person shooting a bow and arrow in the fashion of kyudo. It is no more related to a rainbow than an ice cream cone. So, I try not to employ these analogies and metaphors longer than their appropriate use. The only constant in my practice is that I watch Sensei and try to do exactly what he does. After building a solid base though, I do look forward to indulging in some of the spiritual aspects of the art; though it will not be without a critical mind. 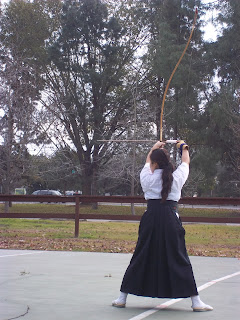 ("uchiokoshi" raising of the bow) 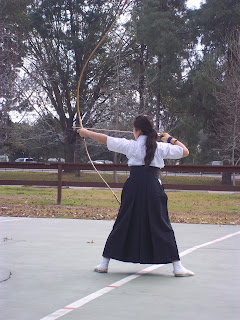 ("kai" completing the draw)
So that's generally what's been going on. Continue below for details on technique and masochism in kyudo.

The technical problem I must fix which is at the top of my "stupid-gaijin-can't-do-kyudo-right" list has to do with my front hand during the release. This I think is one of the strangest aspects of shooting, but one necessary in order to keep an arrow straight towards the target. At the time that you release the arrow with your right hand, your left hand which holds the bow must rotate to the outside. Just before shooting, your hand should look like a big "Y", and after you release it should look like a little "y". 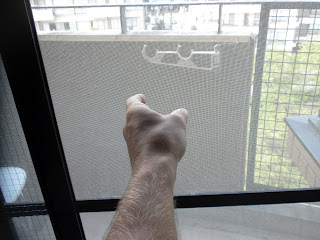 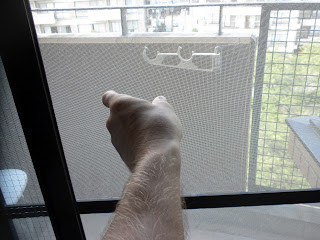 When I first started practicing, I took this very literally and just rotated my wrist. For some reason, it kind of worked at first, maybe because I had a very weak bow. But after a couple weeks, I got a stronger bow and something changed. Now when I shoot, the string slaps my front forearm causing a sharp pain followed by a fat welt. For a couple weeks it's gotten increasingly worse. One of the most important aspects of kyudo is zanshin. After shooting the arrow, one is supposed to keep their eyes on the target watching, seeing, being ... empty, and full. However, many people let out grunts or reveal faces of dissaproval at missed shots. That is not good zanshin. Their zanshin sucks because they take their failures personally. My zanshin sucks because after I shoot I inevitably feel this stinging whip in my arm. Usually my eyes bulge wide open and I let out an under-the-breath grunt. After this I prepare my second arrow in great fear for the next shock. Thinking about it now, it must look really funny and sad. Anyway, in attempt to turn my wrist appropriately, I simple rotated my hand, which is the problem. What you're supposed to do is propel the bone that connects the thumb to your hand forward, as if you're launching the arrow forward with your thumb, and you hand will naturally rotate. Sensei and I realized this just before finishing the last practice, so I am looking forward to a future in kyudo that doesn't involve injuring myself everytime.

One interesting aspect to this is the need for communication with a teacher. Though you shoot the arrow alone, to progress in kyudo alone seems impossible. I shoot the arrow and realize there are a lot of problems, but what they are and how to fix them is largely lost to me. Sensei's pointers launch me far ahead into the future. However, Sensei couldn't see this particular problem in my technique on his own. Well, he might of, but maybe it didn't seem so high on the "stupid-gaijin-can't-do-kyudo-right" list. I had to tell him a couple times that it hurt when I shot, and then showed him the welt, and I read the look on his face: "Wow. OK, let's solve this problem right now." And from then we began to dissect the problem relevant problem in my shooting.

In aikido you wear a normal dogi (general Japanese martial art uniform) until your black belt and then you wear a hakama (usually black extremely baggy legged piece of clothing that looks more like a skirt) over the pants of your dogi. It looks really cool and has been demonizing me since I'm still just a stupid white-belt. However, in kyudo you generally wear the hakama from the beginning. Until now I've just gone to practice in track pants and a long sleeve shirt, but since I've joined normal classes I thought I should probably follow suit and get the hakama and kyudogi (the top is a white short-sleeved dogi). I asked Sensei about when I should start wearing the traditional wear and he said, "When I stop coming into kyudo with huge revealing welts on my forearms."

Yosh! Next week I'm going to begin consistent practice in kyudo and fix this painful problem. Then, I can don the hakama without embarrassment and enjoy kyudo as a safe practice.