Climbing Hakusan and Temporarily Getting Over Myself 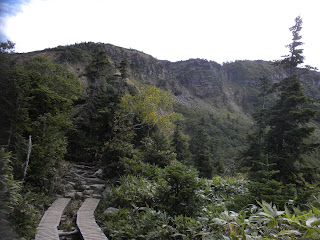 Plan: Take trains and buses to the base of the mountain at a very inconvenient time of 9:00am in which I will wait all day, camp, and leave before sunrise the next day in order to experience the best weather conditions possible. Climb Haku-san that day, camp again, and wake up again before sunrise to descend with the best weather possible. On the last day, hike down, followed by the long transit home by more trains and buses. 3 days maximum Haku-san experience.

Problems: A waste of a the first day just sitting on my thumb reading about zen and scribbling nonsense. The last day being unneccessarily long. 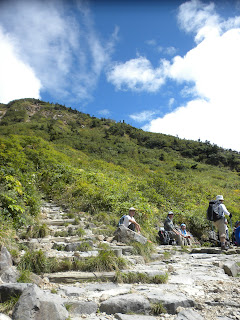 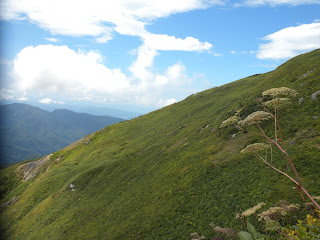 I had this situation of ... me, Hakusan, the weather, the time, and everything else in the world as pieces of a puzzle I had been working on putting together in the perfect way. How could I get it seamless? My answer to the equation, according to precise calculations, was "the best way" to climb Hakusan. But that's no the most important part; climbing Hakusan, that is. I can pretend, train to believe, and declare, arriving at Hakusan at the most perfect time determined by my mind is most important, but it's not.

I know this because of many reasons. The weather was beautiful when the bus approached the base of the mountain. I was abundantly flowing with young male mountain climbing-ness. Because everyone else was doing it. Because if I left that day, I would have a whole night and day to explore the small town of Echizen-Ouno and Fukui City. Because maybe the experience of climbing the mountain at that moment would produce and experience greater than that I had imagined. Perhaps leaving that day would be an experience more horrible than I could ever imagine, but that would be OK too. I decided to leave that morning because it sounded like fun, and I thought the me that had planned all of this looked incredibly small and stubborn; silly and undesirable. Perhaps if I made the decision to leave, I could somehow begin cultivating a me that I liked better than the one that planned vainly for perfection in dark shadows. But that's going too far. That's a thought, but not the one that tipped the scale. Perhaps that thought was in debt to the squabbling self it was pointing the finger at. 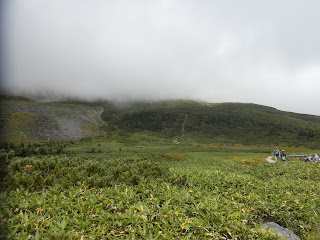 Anyway, I left. It was epic. Beautiful weather. I was climbing the mountain with the masses of other Japanese climbers I somehow didn't expect to see. I passed everyone on the way up with a pack much heavier than everyone elses. I'm beyond being proud of this. However I was deeply insulted by a couple who succeeded in passing me. I took pains to notice that they had tiny packs, signifying that they were just making the trip up and down. For some reason it was OK that they passed me then. It seems after my enlightening decision to accept the current situation and climb was not one to save me from still making egotistic judgements of my seemingly innocent surrounding parties. 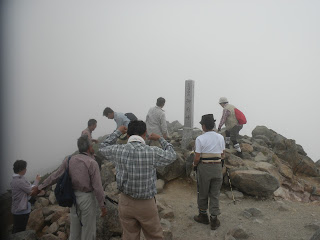 It was beautiful weather until the top. Just as I had suspected, between 1 and 2 o`clock when I would reach the top, it became covered by thick white clouds, blocking vision of anything more than the rocky summit I stood upon. But I expected this to happen when I decided to depart that morning. I have climbed so many mountains to find myself blind at the top like this. It's all good. I climbed down to my campsite, set up shop, read about zen and scribbled small thoughts on paper, watched the sunset, ate my tuna fish and strawberry jam english muffin sandwiches for dinner and went to sleep before 7pm. 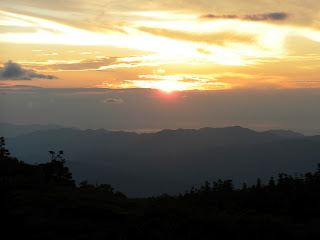 Darkness brought the usual frenzied dreams I have in tents before long hikes. I woke up prematurely around 12am, and stayed awake for an uncomfortable duration, but was surprsied to hear my alarm at 3:30 in the morning and desired more sleep. Regardless, I awoke. I was not alone in waking, but I didn't see any one else leaving within the long hour I took to get ready. "What is everyone doing?" They came all this way, and even woke up at the right time, but are squandering their time here at the camp when the world's most beautiful moment is about to be revealed an hour hike ahead at the next peak.

As I climbed, black slowly faded to blue, and the stars diminished. Still climbing, the impending sunrise boiled a fuel stronger than any coffee inside of me. Tired legs were invisible as I scrambled the rocks to the peak in front of me: that platform where I would see all that I desired. 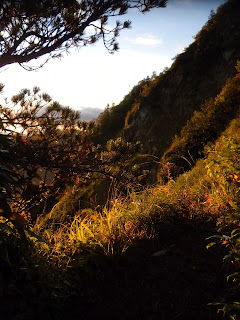 I was not disappointed. Just before the sun rose, it's light fell upon the other sides of the mountains in the distance. I saw the sillhouetes of my best friends: Tsurugidake, Tateyama, Yakushidake. Yarigatake, Hotakadake. All friends I stumbled upon to reach their peaks in order to see others. Now I was on top of Hakusan: a mountain I had so many times seen as an island above the clouds from elsewhere. But now I was there! And I saw new mountains. Norikura and Ontake sat before me like new worlds I must find myself atop. The feeling is inexpressable. My words are faulty and immature. The pictures warped by my camera. Budo is my practice, but mountain climbing is the adventure. I am alone. I am not lonely. I do not want others here. It's not that I don't want them there, I just don't want to listen to people talk. I just don't want to wait for other people to get ready when I'm already packed. I don't want to worry about someone wanting to leave before I do. I have many interests, but when climbing mountains this feels the most ... something. I think the only other person that understands this part of me is my brother, and yet I've never talked about this with him. On top of these mountains I find roots much deeper than budo, much deeper than education. There's only love, and then there's thought, and then there's usually something else. And it's gone. 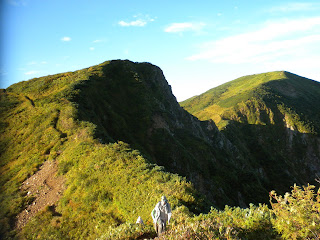 I climbed along the ridges of other mountains in the Hakusan area and made my descent ... with beautiful weather and stunning scenery. Many texts say my mind should be empty so I can experience the world as it is. Well, the problem with that is that my mind is also a part of the world, and actually a pretty big part since it's situated right in the middle of my head. So I have these dialogues with myself about the world and then look up at the scenery, surprised as if it weren't there a minute ago and say, "Whoa." Then I'm back in my mind. Some people like to think about spirit animals and other such non-sense; I am one of those people. Perhaps people usually think of impressive animals: "I'm a tiger." "I'm a wolf." "I'm a dragon." Or I think that's what most young adult males think. Anyway, I get the image of myself as a wolverine sometimes. Does that sound cool? Will that animal forever be limited by the comic book character named after him? The image isn't really all that impressive. It feels like I'm a lonely creature scrambling awkwardly across rocky cold peaks, scavenging and burrowing, alone and busy away from all else. 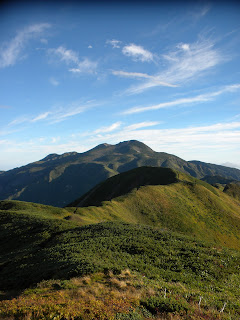 The rest of the hike down was painfully enjoyable: beautiful scenery accompanied by pains in the legs from relentless descent. That's all normal, but one part of the guidebook I read I didn't pay much attention to (perhaps the author purposely left out extra detail on the matter) was a two hour walk along a road to the final destination of an onsen from where I would take a bus. Plenty of cars passed, but the surly mountain mammal just grumbled ahead. Next time, I'm hitching. 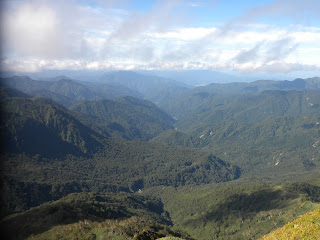 I got to the onsen to find I was thirty minutes too late to get in the bath. It wasn't really that fact, but the manner in which I learned this from a grumpy old man who was apparently responsible for things at the time I arrived. I set up shop outside to make my last tuna fish and strawberry jam english muffin sandwiches only to see him shake his hand in front of me and say "dame" ("bad")

He pointed to the bench located across the gravel parking lot in front of the benches where I should continue such activities for the next few hours until my bus came. It took my about 30 minutes to move my things, make the sandwich, eat it, and curse him. Then I decided to fall asleep. I woke up a half an hour later and decided to buy a beer from the vending machine from the old man's establishment. I crossed that gravel parking lot to make my transaction with the vending machine. Success. I put the coins in, got the beer, and returned. Soon after, I heard an extremely week "Oy!" cry from the empty porch of the hotel. It was the old man. I looked at him for a moment, and he continued "Oy"ing in my direction so I put down the beer and started walking towards him. For some reason, the walk became a jog and I arrived just before him. "Onsen OK".

By Jove the heavens have shifted and this old man has decided to let me take a bath! Hallelueha!

Rode a bus to the small castle town of Echizen Ouno. Then caught a train to Fukui City.

I drank a bunch of sake and ate fish with two very strange sake-drunk dudes.

Woke up the next day more hungover than I wanted, sightsaw Fukui City, went back to Toyama City. 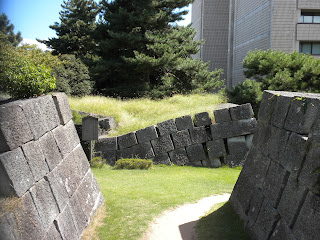 Here is a story from the "Shobogenzo" I would like to share with you here which I found in my most recently read book about zen, "To Meet the Real Dragon" by Gudo Nishijima.

"One day a young monk told Master Dogen that he had a sincere desire to enter a temple and devote himself fully to the study of Buddhism, but that he hesitated to do so because of his family obligations. His mother was very old and completely dependent on him for support. If he entered a temple, he could no longer send her money and she would soon die. What should he do in such a situation?

"Master Dogen's answer was very candid and realistic. He said, 'That is a very difficult question. Even I cannot answer that question for you. It is your problem and only you can find the right answer. However, I feel that there might be a way for you to become a priest and still provide for your mother's health and security. It might be difficult, but if we have a sincere will to do something, a way can usually be found. So I hope you can find such a way. I hope you will be able to support your aged mother and, at the same time, devote yourself to Buddhism by becoming a priest.'"
Posted by Zacky Chan at 9:50 PM