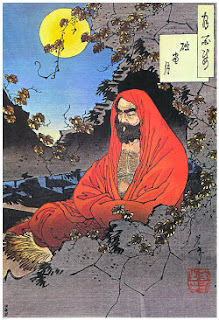 "For a bodhisattva bound by one life, there is no intermediate stage."

This is the last line of the Shobogenzo ... or at least for the appendix of the version I just read.

Like a rock sinking through the sea, when I read this line the whole book just went "thud" against the ocean floor.

There is no intermediate stage.

Only beginning, and being.

We don't know. We learn. Then we know.

Or at least that's my immediate feeling.

In that phrase life is fresh; not like this purgatory that I find myself currently in. I am in a phase of "studying". This I am equating with Dogen's "intermediate stage." So often studying causes our minds to separate the ideas of "us" from those of the "real world." "When I'm done studying, I'll really get started. " As if this time studying prevents us from feeling the world as it really is. As if the world's phenomenon will refrain from engaging us until after graduation. As if what we do now in this time of study will not alter our future or dissappoint our past.

I ride trains everyday. I study Japanese on the trains. When I do so, there is this bubble around me. My world of study - separation - everything else. Because I live in Japan, this bubble world isn't interfered with often. I study Japanese so that one day I can be a me that is fluent in this language; this incredibly smart me that can do more than I can currently imagine.

What am I doing?

My whole life is a study. I study aikido and kyudo for the same reasons. That one day I will be an incredibly smart and capable me. That me is invincible, in the purest sense. But it is somehow not me now, and in fact, the opposite of me concerning the relationship of having and not-having. Now I am nothing. I am so much nothing that I am outside of this world, studying.

The things separate from my study are a waste of time. I don't believe they directly contribute to my Becoming. My job teaching English. My friends. My girlfriend. Sleeping. Eating. Social agreements. Holidays. They don't give me black belts or language proficiecy certificates, so they are a waste of time. As if my future ideal will have nothing to do with these current "irrelevant" activities.

What am I thinking?

There is a flash of my fantasy world followed by an image, and that current image is everyone sitting around thinking about me. "Where is he?" "What is he doing?" "He's fluent in Japanese and a martial arts master." In the periphery of this scene is me with the perfect house and an awesome car. It's so cliche. "He's also a famous writer."

So much of the time I just want to get out of here so that people won't limit me to my curent circumstance. You know what I'm talking about, all those people or the idea of all those people who say that you'll never leave, you'll never change, and everyone knows exactly who you are. Once every few years on facebook they'll just check your profile and get where you're at.

And this is my mind.

When I drink I often exaggerate it. The other day my friends and I all had a barbecue. Afterwards I was driving to an onsen with my girlfriend. She's been watching "Grey's Anatomy" lately and had it on in the car while we drove. I said, "I want to be a doctor." She laughted and said some contrary comment like I couldn't be a doctor. I have never done anything in my life to put me on track to be a doctor, and probably display a lot of characteristics that just don't fit the image of a doctor. This is also in Japan where people choose their careers very early and undergo a lot of strict passages to reach their them. As an American it seems not impossible for someone like me to decide to be a doctor; here it's laughable. But anyway, that's beside the point. This isn't about Japan. This isn't about my girlfriend. Niether are at fault. The issue is that I took this comment straight in the head and thought for the first 30 minutes of onsen how I was going to be a doctor and prove everybody wrong. I was going to be invincible. Finally somewhere after I stumbled lightheaded out of the sauna and was sitting there dripping pounds of sweat next to a bunch of other naked Japanese dudes, I realized I didn't need to be a doctor, and probably wouldn't have a lot of fun in that process anyway.

These are the episodes of an intermediate.

There are stages in life, and yet there aren't.

Form and chaos. I believe this is the world; some incomprehensible painting.  People, religions, systems try to come up with answers bigger than the picture, but they are all limited. Prejaculatory moments of seeming invincibility.

I don't think the Shobogenzo seeks to answer the paradox of existence. Or at least this is what I think after finishing it. Just about every night since I recevied the four volumes as a present last Christmas, I have gone through reading exclusively this book. I can't believe I just read the last line.

"For a bodhisattva bound by one life, there is no intermediate stage."

I designate myself as a student in an intermediate stage. I don't like this. This is life.

I've got some other things to get off my chest here; a couple of topics I wanted to write about in their own posts here, but they're just falling into history while new monsters keep coming in.

The Doshu came to Toyama for a training seminar. It was awesome.

Masuda Sensei from the Kobayashi dojo came for a weekend seminar. Lots of training and drinking while I was recovering from one of the worst colds I've had in a while. It was awesome.

Going to aikido about 3 times a month totally sucks. But it's all I can do to survive.