Kyudo Problems and the Philosopher Dragon 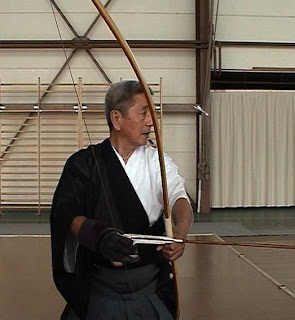 (yugamae - starting position)
So, I've generally solved the problem with the string hitting my arm. First of all, I bought a sweat band to put over my forearm. HAHA! That's not cheating. Secondly, I've made a lot of progress with Sensei discerning the problems with my shooting and putting correct form to practice. The overall problem is that I have to consiously think of each of these things when I shoot. So, as is, kyudo to me is like this fiery red raining apocalypse where I have to mind all of these different demons with all of my strength and concentration in order to do what I gotta do. It is not the tranquil zen practice that maybe you are imagining. Well, this morning I went from not even realizing all the immediate problems to generally handling them all at the same time when I shoot. That's a big jump and I can't wait until the next training session to progress further. 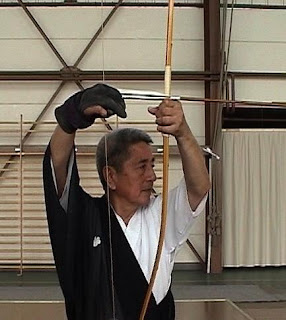 (uchiokoshi - raising of the bow) 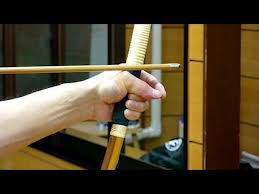 (tenouchi - hand position)
Concerning the specifics, the main problem is my tenouchi, holding the bow with my left hand. When holding the bow, there are some things that should absolutley not change from begninning to end, like a 90 degree angle with the bow and the bottom edge of my hand (tegatana in aikido language), firm and steady contact between the bow and your hand in a perpendicular fashion (in accord with that 90 degree angle just mentioned), there should be a space between the bow and your second knuckles on your fingers, and your thumb should be basically straight because you're essentially pushing forward with your first knuckle that connects the thumb to the hand. A week ago, I wasn't doing any of this. Sensei says this is the most important part of shooting, yet the most difficult to teach because you can't see any of it; it's all happening inside of your hand grip. This is why these problems need to be dissected as such because we can't see directly what's happening. 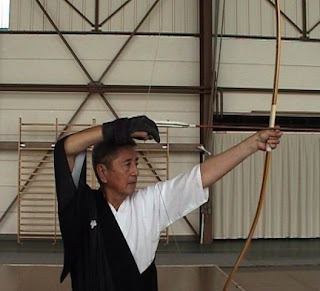 (daisan posture)
The next specific problem relates to my daisan posture, that position you keep for a moment between the uchiokoshi (raising of the bow) and kai (drawing of the bow). While some things are supposed to be consistant from beginning to end, it is in this motion from uchiokoshi to daisan that the bow is supposed to slide in the middle of your hand. How are you supposed to protect all these things while the bow moves in your hand? That seems to me one of the great skills of sensitivity in kyudo that takes years of internalization in order to perform well. Anyway, so the bow spins in your hand. From daisan until the release, the grip on the bow should not change, and from daisan you should lower the bow as is. When in the daisan position, the angle between the bow and yourself stemming from your arm should be at about 30 degrees. Before, I was pulling it too far, to about 5 or 10 degrees, and this was also greatly affecting my shooting, most noticeably in making the string whip my arm. 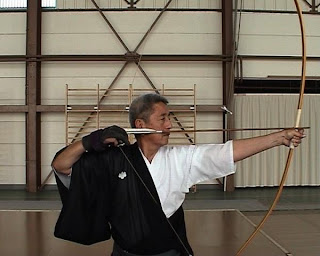 What I've been experiencing with these problems is a kind of stacking of sorts. Problems that start at the beginning, build throughout the process of movements, triggering other problems, that make for a very poor form at the end of it all when you finally come to shoot. I have a lot of these problems, which is why it feels like a fiery red apocalypse raining down on me while I'm standing there just before releasing the arrow. 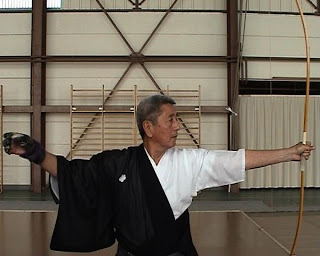 (zanshin - position of mind and body after the release)
One other main problem I have has to do with my aiming. Whenever I pull back, I'm always a little too high or low or left or right, and to be honest, I don't feel like I have much bearing at all as far as what I should be doing. But this is secondary to those problems previously mentioned concerning tenouchi and daisan.

With my mind on all of these things, I have totally forgot the other most important part of shooting in kyudo: hanare, the release. Sadly, that will have to wait until the intial problems at hand are tended to. But I'm sure hanare will be the focus of many future posts on kyudo.

I reflect on my kyudo, but perhaps it shouldn't be thought of so much. I can't help but criticize my progress. How is my progress anyway? Is it fast? Slow? Sometimes it can really be hard to tell. When you practice an art alone like kyudo, it can be particularly hard to gauge your progress because there's really no one to compare to. Do I hit the target often? Do I shoot without error? No. But not even masters do these things. I look at my sempai (seniors) and sometimes they hit the target and sometimes they don't. Sometimes Sensei praises them, sometimes he fills them with critique. The purpose of kyudo isn't hitting the target, and you really can't see a lot of the important things that affect shooting, so how can I gauge progress? Like I said, perhaps this reflection isn't so important as is. All that matters is, doing my best to see what's happening, doing my best to observe the kyudo around me, and doing my best to shoot as best I can. Concern without worry. It's like a taught line, not pulled too tight, but not slack.

I am the kyudo string! 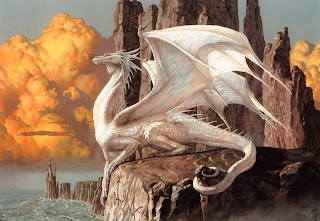 Oh yeah, I am also host to a particular philosopher dragon. He seeks the freedom of cosmic contemplation; a mountaintop where he can sit and stare at stars. If something prevents him from such an activity, the dragon possesses me, and together we break the obstacles through time and mighty effort. Satiated the dragon is beautiful and merciful, deprived he is relentless. Every time my life changes, the dragon is pulled from the peaks and we work. The dragon is real, but he is not me.

I'm going to sleep now. I wonder what the dragon will do until I wake.

(The series of pictures above is from the website http://www.kyudo.org.uk/default.php?id=7&ad=1)
Posted by Zacky Chan at 10:56 PM