You'd think people living in places far from the equator would have a very strong relationships with their internal selves. Away from that great center line of the Earth, daylight dwindles from the expanding grip of night as winter waxes. Inhabitants of such distant lands reach the solstice and enter a cold that won't retreat for months. Snow, wind, freezing rains. Humans are not meant to venture out in the winter dark, and so, people amass inside large communal dwellings. I think of my two respective homes: the Pacific Northwest of the U.S., and the Hokuriku Region in Japan. Both have very distinctive homes designed to provide cover in the winter.

In the PNW, the indiginous peoples built longhouses. 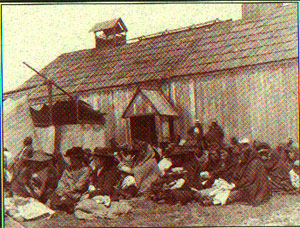 Hokuriku is famous for gassho-zukuri houses; their construction unique in Japan for resisting the heavy snow falls that come every year in this region of the Sea of Japan. 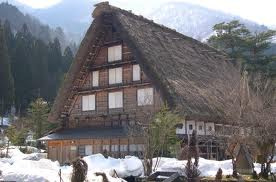 Next to the largest shopping center in Toyama City is a print shop. In the window is a large black and white paining of one of these gassho-zukuri houses in winter. There are a few people inside huddled around the fire, and a few people outside in twisted forms. I once sarcastically said to my girlfriend who isn't particularly fond of the snow, "Look, they're dancing!" But it's obvious they're not.
Winter is a time unkind to those who cannot find such lodging. For people who have lived in these regions for so many generations, a way of life evolves around the invincible winter. Though I live in this area, I've been to these houses, I'm not sure what the people really did inside. For my home in Washington though, I'm well aware of the dances and art that were created and performed for and by the people during their long winter months. 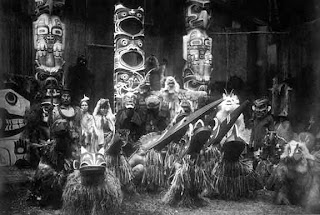 My mind also goes to a region that may know long dark winters better than any other culture: Scandanavia. Memories I've never had of pagan rituals come to mind as I visualize their unique art. 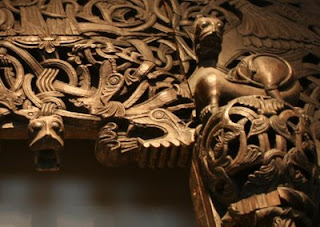 In these cold regions, a vast pantheon of gods inhabit each regions' mythologies. My ancestors hailed for who knows how many centuries in such countries of northern Europe. I was raised in the dark and cold pacific north west. Now I live in a region of Japan famous for harsh winters. I can't help but feel a connection to such places known for unwelcome climates. I feel most ... something ... when looking at a dark green forestline blending with fog into a dark afternoon overcast sky. I relax when it rains. Somehow, like one cannot tell what time of day it is in such conditions, I could be there forever, as if the clock has stopped. Somehow, excitement floods in at the sight of snowfall first thing in the morning. If it's dark at five p.m., I wonder in anticipation what I will do for the long night until I sleep.
But I also enjoy this due to some kind of happy lonliness. People of old most likely had quite an opposite feeling of winter at times: given that everyone was stuck together in these small dwellings. "What did they do?!" I often ask myself.
I think now of a place that is never empty in winter: a gargantuan hall of heat. It is also a place that is never empty in summer, or fall and autumn for that matter. It is the pachinko hall. Pachinko is the most popular form of gambling in Japan. No matter the time of year, the inside will never change from the stimulation overload it provides. The people of often inhabit such places, know the same life, no matter the season, no matter the location.
I have a deep fascination for winter and crappy weather, but I wonder if it's all just an image fix. As a modern, my physical dealings with the elements are increasingly limited. Would a screen saver suffice?
I turn one one machine to fix it all. It gives me heat, it gives me cold. I turn on one machine to find it all, videos, music, my friends, the news. I have a drink to get up, and one to get down. At this great control panel of modernity, our Great Choice may be just a Great Farce. We want to be up all the time, so when we make choices, it's to maintain that higher location, and change does not occur. Only when going down can we feel something, and scrambling we hurry to find a way to get back up, usually through a means of cash, which we earn from our "sweat"? Our "hard earned pay"? Is that what most people encounter at their work? Winter is a kind of down to many states of humanity, but our control over the beast is more able every year.
I think of my kyudo sensei. He goes to the dojo and pulls a bow every single day of the week. Every day he goes through the weather to arrive at the dojo, which is a half open compound: The place from which one shoots is under cover, but the face is open to a field the arrows fly over to a covered target area. If it's cold, he's cold. If it's hot, he's hot. If the weather was erratic and was sunny for a bit, but poured rain for 10 minutes, he knew about it. If he is feeling crappy, he will probably shoot crappy. If he's happy, the bow will tell him. He is a man who knows pretty clearly what is going on every single day of his life. If he doesn't know, at least he's out there trying, in a world with such varied circumstances that at least one source is bound to tell him.
I wonder how many days of my life have been a haze, cursed to some inside of myself where I don't really do much at all.
I wonder how many winter nights I've been able to go inside of myself and uncover mysteries I think I would never find under a warm starry night in a hamoc.
How much are we products of our environment?
Very much I would say, and yet there is something that lives, untouched by the outside world. Something that we see only in a dark place where snow and rain cannot fall, where sun cannot light.


Thank you again for reading a post that may seem to have nothing to do with budo, living in Japan, or anything in particular at all.﻿
Posted by Zacky Chan at 10:42 PM