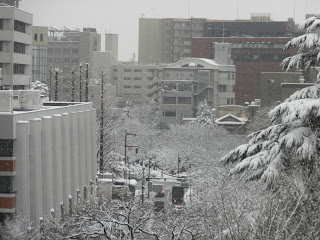 First of all ... MERRY CHRISTMAS from a white snowy Japan! All is well here. I wish the best for you all on this very special time of the year. In Japan you'll see lots of Christmas advertising and decorations, there's tons of Christmas cakes everywhere, and I'm sure that the occasional gift is given, but it's just not the same as I'm used to back in good old North America. Though there's more than enough plastic back home too, but there is also a delicious Christmas feast, a decorated tree, a fireplace, and a family to make it all real. It may not be for everybody, but it's a special time for me. I had a skype with the parents, a Christmas feast of sorts, presents exchanged through air-mail, and time with the people I care about most here. It's definitely snowing now.

If only I could get that fireplace ... and a dog.

Now for a story about kyudo the other day. 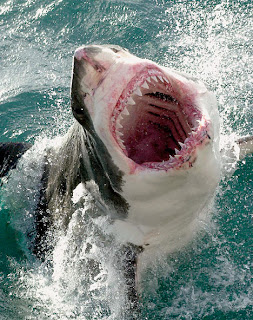 The string in kyudo is slapping me in the face again, and I'm terrified to the bone.

Lately my biggest problem has been not drawing far enough. Everytime I draw back Sensei says the same thing: "Pull more! Farther!"

That's usually OK but, last week I bought a new kake (glove). Today was the second day I've used it. I'm not used to it yet, it feels weird and so I'm doing weird things with my hand inside the glove which makes it slip out prematurely and slap me in the face.

Usually the main reason this happens is due to not twisting the hand enough in the correct way, but it also has to do with relaxing my hand at the same time. But because I'm afraid of the string slipping out, I'm not relaxing my hand. Sometimes when I pull the string, something feels wrong deep inside of me and if I relax the tension I believe it will slap me in the face.

I need to relax, but I can't. With this, naturally, the further I pull the string and the longer I wait in the draw before the release (two things I should be doing more) the more likely the string will be able to slip out and the more force it will have to hit me. So now my pull is very small and full of tension, instead of large and relaxed. My energy is raised to my shoulders and I'm just waiting to brace myself against the slap.

Today the arrow slipped out about 4 times. When this happens, everyone turns their head and stares at me half in horror, half in confusion. They are shocked, feel bad for me, and don't understand why it happens. I am equally shocked myself, embarrassed, and even more so frustrated. One of the older guys told me to ice my face after the first one. I could care less about a growing red welt on my face, I just want to fix the problem, but I took a break and iced it anyway. Later I shot a few more arrows, and then it slipped out again, early enough not to hit me in the face. That's not painful, but's still hell, and the frustration compounds exponentially. I walked back to take a break for a second and two women asked me some stupid question about it I don't remember exactly like, "It slipped out again?" This was like another slap in the face and I gave a very intense nod of affirmation trying to hide the rage and we just stared at each other for a second. "Why are you talking to me!? I just want to fix this!" is what I was thinking.

Sensei told me to take a break and have some tea. He said I need to change my attitude and that I'm too afraid now. Damn straight I'm afraid! So I took a tea break and talked about completely unrelated things for 5 minutes. I went back to put on my kake, but nothing had changed. All I could think about was the prereleasing sring. I shot a few and then it loosed again. Sensei came and took a look at what I was doing. I pulled the string back full of tense fear, but the arrow luckily didn't come out early. He said, "See! It's alright, don't worry. Just pull back as far as you can." But it doesn't change anything. I hurried up and changed and went to catch my train.

It was the most frustrating walk I've ever made from the dojo to the station. I had this very rare desire to scream as loud as I could. Traffic lights turned red as I approached them. I walked into a bakery to grab something before the train, but a mother, father, and three small children were stopped dead in front of what I wanted so I just turned around and walked out. I climbed the stairs and high school boys were standing in the way looking at their cell phones. After passing thorugh the ticket booth a crowd of high school girls passed giggling in their hiked up skirts talking about absolutley nothing very loudly. Getting off the train and facing the crowds I suddenly remember that everyone stares at me. I think about all the time I put into kyudo that isn't about shooting an arrow. Waking up early and getting ready, walking to the station, spending the money on train tickets, riding the train 20 minutes one way, walking to the dojo, getting dressed in the hakama, getting undrssed out of the hakama, walking back to the station buying another ticket, riding the train again, walking back home just so I can get ready to ride another train to work.

Why do I do all of this?

I love kyudo. It's one of my favorite things in my life now. But now it has been poisoned by the absolute feeling in the art.

Why is this happening?

Is it just because of one small thing I'm doing in my wrist? I don't understand. I know it would be better if I relaxed, but if I do, I know I'll get slapped.

I'm afraid, but just "not being afraid" won't fix this. I cant just say "Zac, don't be afraid," and everything immediately fixes itself. Or would it?

I'm now remembering a car accident I was in in high school where I was sitting in the back of a jeep. The completely sober, incredibly stupid driver was going way too fast on a dirt road through the forest. As I was riding in back the tension was on high alert as I felt we were going way too fast. All of a sudden we we skidded through a turn and SHOOT! ... there Zacky Chan flew out of the back of that jeep. I'm now remembering the image of a fast approaching fir tree, then waking up in a hospital. It's the uncontrollable factor that may be the worst. Zacky Chan the passenger flying into this horrible near death concussion from this machine someone else was driving. Zacky Chan pulling the string while it can just slip out at any moment.

But I'm the one holding the string! I could have told the driver to slow down! There is an element of control involved. Where is the line?

I need to consume something. That's what I thought walking out of the dojo. I need to eat or drink something ... but I don't want anything.

Why do I want them if I don't want anything? I don't know, but it's a very clear feeling. I attribute it all to issues of control. I spent all morning getting beat up in kyudo, now I want to take the power back. It's fear. I'm so afraid I'll do anything. It really is true, the caged animal is the most dangerous. No wonder people have addictions to eat, drink, smoke, beat, molest, kill. It's because we don't know how far we control the world, so we don't know how much we're worth, but we want to be good and important, so we're afraid, and take action to compensate. But none of that works, because the problem lies at the root of not knowing and having desire. There is no way we can know, and desire is a natural part of life. Perhaps I'm misguided, but I don't agree with people who say if you meditate through the desire you will come to find enlightenment and know. I don't agree with people who say we need to cut off all desire. I also don't think "just relaxing" is going to fix my problem. But honestly, I don't know how I'm going to fix this problem. I'll do my best to relax, try to return to a place where I wasn't getting slapped in the face, do some researching on the internet and then go to practice ready to try again and ask for help.

I used to get hit in the arm, but that problem has been solved. I've gone through phases of hitting the target a bit, to times not at all, and back up again. I want to be better. I don't want to be afraid.
Posted by Zacky Chan at 1:42 PM