Lying Down Into Winter

I've been away for awhile. If you're into categorizations, you could say I've been in a phase. Almost a month ago I went to a very eye-opening aikido seminar, one that made me think about what is "good aikido", "bad aikido", "why we do aikido", and how I fit into all of that. This was all just after an aikido test. Somehow I had transformed pace into a violent scurry through unfriendly brush straight up the side of the mountain. Exhausted I collapsed, still very far from the top. So I sat, and thought about all this racing. Last night I went for the first time since the seminar, ending an unusually long three week hiatus. Why the absence? The world sucking out my Saturday nights. But actually, that's a bit much. That was me a year ago. In the beginning I could tell aikido to respectively "bugger off" on Saturday nights because I had things to do which didn't include productive effort. Then a year ago, Saturday night became all I had for aikido, and it became a treasure for me to hoard and defend. "Aikido: good. People: bad." Well, I've tried that for a while, and that's not what I want to do anymore. I still certainly love doing aikido, but it's not going to consume any more of my fear. My mental progress chart is a farce. So I burned it, and I won't write another. It's amazing how we go to sleep every night, maybe even in the same futon (bed, what have you) and yet everyday is so different, we cannot go back; we cannot go back. Now I'll go to aikido when I can. If it dwindles to nothing, that's the world turning; something much larger than aikido.

I've been going to kyudo consistently and feeling very good in the practice, but due to winter break (which means high school students invading the dojo) tomorrow will be the first and last practice of this week, and maybe I'll go once or twice for the next two weeks. This is also due to my own holiday: about 10 days of no work, and no obligations but a few end-of-the-year parties and an overnight snowboard trip. This is the first holiday season I've stayed in Japan. On the one hand I'm incredibly excited to have as little stress as possible, and as much opportunity to crawl into my own winter world. Yet that winter world is in a hole, quiet and sparse. I have a very warm home in the mother country of the U.S.A., one I honestly cannot imagine being any better. But instead of being in that home with undoubtedly the most important people in the world, I will be here, in my hole with the few things I have insulated as best I can from the Japanese hive I live within.

In this winter hole, just beneath my mind, ancient subliminal forces glitter in the darkness. They are real, and I wish to know better what they are. So I'll sit and attempt to conjure them out by whatever means I can. I am not dead. I am not frozen. I can change. But that change will not come about from more maddened scheming. I'll need to take a walk, then sit in a tree looking down at the snow. There are beasts to tame. In that realm, we will see aikido's true worth. 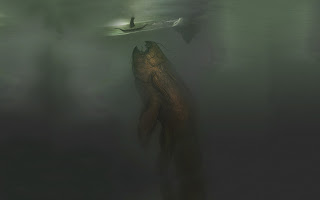 P.S. Signs of absence from aikido are a tight back, raising of center of gravity, and lack of connection/reaction to your partner. In kyudo, it's not being able to do anything at all.
Posted by Zacky Chan at 10:08 PM