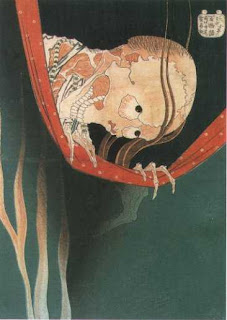 Well, though today was Wednesday, I had work off due to unusual shedules from midterm testing, and I had a lot planned with my free day. From nothing comes great waves of a lot of things. I thought it wholly possible to sleep-in, skype with my parents for the first time since talking in a long time, practice every facet of physical conditioning and martial arts I could want, clean my kitchen and bathroom as well as brush up on the other tatami rooms, take care of the miscellaneous business of papers and internet, write an elaborate blog, and have a couple hours of free time to spend as I like. I'm not sure what you think of that already, but I should have left it to cleaning half of the kitchen.

Slept in; almost as much as I wanted. Skyped with family; check, and it worked out so well it will have to be more regular. Martial practice and conditioning; two hours would suffice. Cleaning kitchen and bathroom; well, like I said, I could have just cleaned half the kitchen all day to pace myself in a desirable way. Instead, I scrubbed furiously every corner of everything in a frantic pace, and this is where I lost it. To spare what could be boring details, many many hours later I completed it 99% until I broke down in a frenzy and rushed out the door to the nearest izakaya (Japanese pub). There's one literally across the street from my apartment, but it was closed, so I flew on my bike to one a bit a way. There I would indulge in beers and a long line of exotic yakitori. I successfully let off a lot of stuff, but came back to the apartment to do the strangest looking Tai Chi form I've ever done. I followed the movements my body had memorized long ago, but sincerely expressed how I felt, which like I said, came out to be the strangest looking Yang long form ever performed in a tatami apartment in Kurobe, Japan. I know sit writing and eating a modest bowl of rice, and having just one more beer, and can only think of the strange and stressful adventure I had today racing across the cosmos.

My excessive goals, led to excessive actions, matched by apocalyptic excessive thoughts, and excessive physical repercussions. I now look and my apartment is clean; remarkably clean. I am exhausted and ready for a rest. But I wonder about the effects of excessive behavior. Maybe I'm a sucker falling to my knees before Eastern wisdom, but the teachings of moderation ring truer than the bells of Gion Shoja.

"The Sound of bells echoes through the monastery at Gion Shoja, telling all who hear it that nothing is permanent."

I saw many demons disguised as enlightenment today, and a grand array of illlusions based on skewed perception. I wonder if I saw anything real today.

Excess can sure be interesting, but sometimes it seems like it's nothing at all.
Posted by Zacky Chan at 9:49 PM