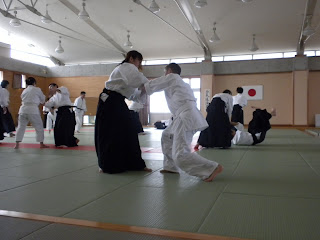 In Japanese, hisashiburi means "long time no see", and that's what I said to everyone before we started, and how I felt the whole night. It was just one of those extra white belt nights.

After Golden Week which is considered the longest stretch of holidays in Japan (though most Americans would probably eek to know that's their longest holiday of the working year), and then traveling with Jolene for her last week, it's been about two and a half weeks since my last aikido class. I've been practicing on my own, and been thinking of it extensively, but I am now reminded that does very little compared to consistent practice with partners.

It was a little frustrating, but with my aikido group it was just really nice to see everyone again, and have fun. What else am I doing it for? Pride? Power? Magic techniques? Well, maybe a little of all of those, but mostly fun.

I did however treat myself to onsen tonight. For those that don't know what onsen is, just wait for the next post or two for a spotlight on my favorite part of Japan.

Now it's time to sleep to the sound of rice field frogs.
Posted by Zacky Chan at 11:53 PM