Here I reveal one of the many ninja secrets of the Japanese that keeps their edge: Onsen. 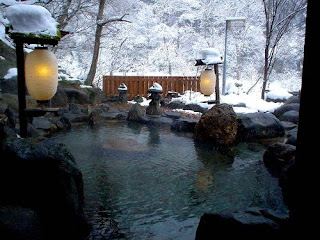 By definition, true onsen are only those that use water from geothermally heated springs that contain one of nineteen designated chemical elements, and must be at least 25 degrees Celsius before being reheated. I suppose in the truest sense, these are found completely untouched in nature, however, it can also refer to sites where the natural water is used in a bathhouse. In Japan you will find other bathhouses that do not fit the definition of onsen, but may still use the name. Their true term would be sento. 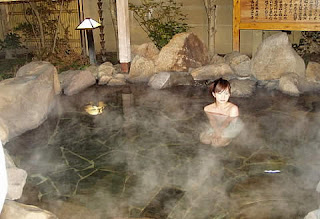 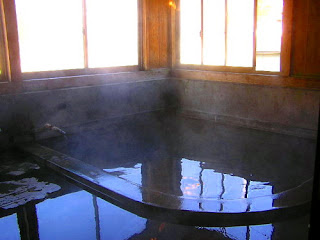 First, there exists a medical practice called balnotherapy. Balnotherapy refers to the medical use of spas and water such as drinking of waters, use of hot baths and vapor, as well as various types of mud and sand used in hot application. Often times, the water used in balnotherapy will contain various minerals, which is where onsen come in. According to these definitions, going to a true onsen with the intent of therapy could be considered a form of healing.
Second, the best website I found on the effects of particular minerals found in onsen on the body is listed here, http://www.nihonsun.com/2009/03/06/the-healing-properties-of-a-japanese-onsen/. Some commonly believed healing effects of onsen are aiding heart disease, blood circulation disorders, neurological disorders, painful joints, arthritis, rheumatism, menopausal discomforts, chronic skin diseases, etc. But the list goes on and you should check out the site for more examples if you want to know the specifics. It should also be mentioned here that onsen can be dangerous for some people who are pregnant or have certain heart conditions. 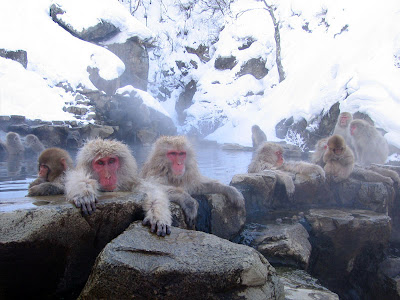 So what’s the REAL deal with this onsen stuff? Well, much of it greatly depends on the onsen, as they vary quite a bit. So far, I’ve been to one that was deep in the mountains which was only one medium sized tub outside which had an absolute amazing view, but the water was so hot that you really couldn’t stay in up to your shoulders for more than 2 minutes without passing out. Another hardly had a pool hot enough to consider an onsen. Another was one more like a theme park in Tokyo which wasn’t real onsen. And another one close to my town is new and has lots of interesting and strange baths, but isn’t real onsen, too many young people go, and it’s just missing something.
BUT! My absolute favorite thing I’ve found in Japan, is not just any onsen … but KINTARO! It’s the closest onsen to my house (30 minute bike ride) and is real onsen. After you pay about $7 for an hour, you walk into the changing room where you get naked and enjoy a preliminary beer if that’s what you’re into. Then, you grab your little hand towel, which you can hold discretely in front of your specials, or simply plop into a pile onto your head, or snap it at the closest person and laugh … NO! That’s a joke, and not a funny one because if you did that, especially as a gaijin, you’d probably be kicked out of the country for life after they cut something off. Anyway, then, you walk through the entrance into a large room where you are welcomed by the biggest bath I’ve seen so far (but not too big), and showers and a few other pools off to the left. You rinse yourself with water, and get soaking. At Kintaro there’s a large indoor hot bath, and two outside that vary very slightly in temperature. These are the main features, but there are other baths such as one’s with jets you can sit in, one’s with jets you can stand in, one waist high that is only warm which people usually walk in for exercise, and a freezing cold one I actually just discovered the other day. Also there is a sauna which is by far the hottest sauna I’ve ever been in in my life. When I read the thermometer inside I think it says 110 degrees Celsius, but I might just be hallucinating from the heat. Oh, and certainly one of my favorites which is just a stream of water coming down from the ceiling you can sit under and have it hit against your back and neck. Oh yeah. Inside and outside there are large rocks of various colors of grey, red, and purple, stained from the minerals of the onsen, and are in a very specific Japanese style. I can’t put a name to it, but if you’ve been to Japan you probably know what I’m talking about. It creates a wonderful scene I haven’t seen at any other onsen. Also, outside there are large pine trees and also sakura trees! Which means most of the year it’s a brilliant green, but in the spring its electric pink. Could you find a better hanami sight? 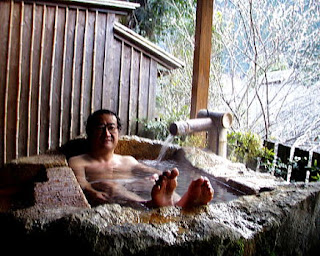 But there’s one more factor that makes Kintaro different from all other onsen … the oyaji. Ojiisan is the word for grandpa, but for onsen situations, the ojiisan that visit Kintaro we will call oyaji. When I think of oyaji I have a distinct image in my head (maybe you have your own if you know this term), but its usually followed by a wonderful smell of hair tonic, cigarettes, alcohol and onsen. (I also apologize for anyone who takes offense to this, but it’s a humorous generalization that makes me laugh, so I will share it with you). Anyway, 75% of the people who visit Kintaro are oyaji, and you can find them doing various things in the onsen. Simply sitting and enjoying the bath, ignoring the one little kid who may be running around causing trouble, laying sprawled out by the side of the pool sleeping, scratching themselves very blatantly, or my favorite, doing various stretches and calisthenics while making “Issshhhhh“ sounds. Or also chatting away with their other older buddies. But it’s the feeling of Kintaro that is so special. Possibly one could relate it to the image of the quiet local pub where people go to relax and just be. At other onsen I see too many people making it social hour, or maybe just too many gaijin. But here you just come to hang out. I think I am considerably spoiled with Kintaro, because I stick my nose up at every other onsen I’ve been into. I am now currently on a onsen challenge, looking for one to rival Kintaro. I hope as a young gaijin, I haven’t ruined this oyaji heaven, and I hope it doesn’t change while I’m here.
Though if you visit me you absolutely cannot miss this experience, and are guaranteed at stop at Kintaro.

I think that’s enough onsen talk for now, but I hope I’ve left you with a good image. The pictures are not ones I’ve been to, but random ones to try to give you a feel of what its like.
Posted by Zacky Chan at 11:02 PM