Are you the forging of a katana? 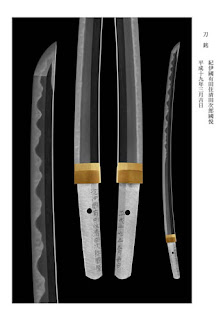 After researching a few different websites on the forging of a katana (Japanese sword), Wikipedia had the explanation I deemed best, (although I found a really interesting article on the comparison between old European swords and katana, which seeks to demistify the Japanese blade it seems here at http://www.thearma.org/essays/hype.htm) and so here it is (from Wikipedia):

"The authentic Japanese sword is made from a specialized Japanese steel called "Tamahagane"[13] which consist of combinations of hard, high carbon steel and tough, low carbon steel[14]. There are advantages and setbacks to both types of steel. High-carbon steel is harder and able to hold a sharper edge than low-carbon steel but it is more brittle and may break in combat. Having a small amount of carbon will allow the steel to be more malleable, making it able to absorb impacts without breaking but becoming blunt in the process. The makers of a katana take advantage of the best attributes of both kinds of steel. This is done by a number of methods, most commonly by making a U-shaped piece of low-carbon steel (the outer edge) and placing a billet of high-carbon steel (the core) inside the U, then heating and hammering them into a single piece. Some sword-makers use four different pieces (a core, an edge, and two side pieces), and some even use as many as five.[15]
The block of combined steel is heated and hammered over a period of several days, and then it is folded and hammered to squeeze the impurities out. Generally a katana is folded no more than sixteen times, then it is hammered into a basic sword shape. At this stage it is only slightly curved or may have no curve at all. The gentle curvature of a katana is attained by a process of quenching; the sword maker coats the blade with several layers of a wet clay slurry which is a special concoction unique to each sword maker, but generally it is composed of clay, water, and sometimes ash, grinding stone powder and/or rust. The edge of the blade is coated with a thinner layer than the sides and spine of the sword, then it is heated and then quenched in water (some sword makers use oil to quench the blade). The clay slurry provides heat insulation so that only the blade's edge will be hardened with quenching and it also causes the blade to curve due to reduced lattice strain along the spine. This process also creates the distinct swerving line down the center of the blade called the hamon which can only be seen after it is polished; each hamon is distinct and serves as a katana forger's signature.[16]"

From that point the entry goes on to explain the hardening process of the blade on the molecular level, but for this topic, the excerpt I chose was enough.

Created from two different types of metal to make one ideal blade, which is then hammered and folded over itself up to sixteen times for its construction; this is the part I have been pondering lately...

With each seperate fold, the blade is made stronger.

Do our lives have folds in them? Events that are begun and finished, only to start again in a similar but advanced progression?

I have been here in Japan since October of last year, and I can look at my experience in retrospect and already see patterns and upgrades. After a week of being here I had settled in a bit. Then after two weeks again. Then a month. Two months. I left to visit my loving and sorely missed girlfriend Jolene for three weeks in New Zealand during their summertime, only to return to many feet of snow in Japan. But that was a new beginning. Thing's kept changing about every couple of weeks to a month. Jolene came to visit Japan for two months, but alas has left, and another cycle has already begun.

The folding, the hammering, the working of a young human experiencing the world around in waves of spiraling cycles of growth.

And if I am the sword, I wonder who is the smith?
Posted by Zacky Chan at 9:41 PM