Aikido IS the most practical martial art! & I fixed the comment issue 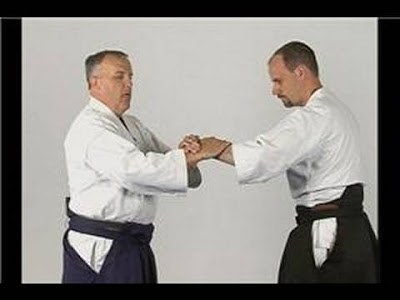 Look at these two nice guys trying to shake hands. That's certainly something I try to do more often than break someone's ribs with a reverse punch or cut through something with a katana.

I'm very interested in those latter skills, but really, aikido helps me more in my daily life significantly more than other martial arts I have encountered. Perhaps it's just the experiences I've had, or the time in my life, but aikido is giving me a great mat area to practice core principles that I encounter all the time out on the street.

One that I'm thinking of right now is just simple people to people interaction. In aikido with your partner, you work actively together to reach a conclusion. If one person doesn't do anything, nothing happens. Unless you're just practicing punching things and you nail the person. So in a conversation, what would this be akin to? First, two people just standing there doing nothing. Next, would be one person doing nothing, and one person doing all the work ... work that probably dominates and hurts the partner if the action is followed through with realistic intent ... which is important when practicing practical martial arts, no? Maybe both people could just rail into each other with all their strength trying to dominate the other ... what kind of conversation is that? Maybe ask the dudes who yell at two bloodied fighters through a big 'ol TV screen. I'll be bold enough to say that the particular role of uke in aikido makes for a great interaction between two active participants. Looking for something of substance; movement that has serious causes and affects in body mechanics throughout evolving circumstances that give the ability of but not requiring physically destructive damage.

Perhaps there's another analogy with makes things really funny concerning aikido. How about two people getting together acting a scene out pretending to be mastering the phenomenon of cause and effect by following a pre-played script ... and dressing up and using foreign languages to enhance it's visual appeal?

Thank you for indulging more analogies and metaphors rank with generalizations that have probably already been said elsewhere.

OH! I finally fixed my comment problem, and it was just as J.C. said ... even though I just glossed over it and spent way too much time under my account settings looking for something more fancy. I feel like I just spent an hour staring at my taxes reading the fine print of something totally unrelated, when I should have just answered the questions it asked me. Maybe there will be a post concerning the affect of aikido on simplified problem solving.

Rick: Don't hesitate to leave comments like you have. They turn it all upside down for me and in a good direction every time. Thanks for the time.
Posted by Zacky Chan at 9:23 PM