"Does it work?" Part II: Your system is weak and dying 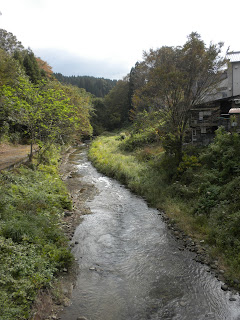 The foliage here in Toyama is particularly lush. The rivers are particularly full. Things feel very thick. It is a complete ecosystem, full of everything it needs to expand and contract appropriately with the seasons. And yet, it doesn't have everything in the world. It is a "complete system" of the world, but it doesn't contain deserts, the highest mountains, tropical beaches, or elephants. How can it not have "every" phenomenon the planet has to offer, and yet be complete?

Many modern martial artists yearn to have a "complete" arsenal and understanding of the martial arts, so people idealize about being a grandmaster in literally every style ... mastering every technique known to man and nature. Surely this isn't just a modern trend, every martial artist has surely pondered this matter at some point. But in today's world we are provided the illusion that it is possible to do so. We can study the different styles and master different approaches; the kicking of tae kwon do, the softness of tai chi chuan, the striking of karate, boxing, groundfighting and grappling in bjj. Theoretically if we were to be black belts in each of these, we could have everything. We could have Mt. Everest right next to Costa Rican beaches with rainbows shooting up from 8 foot walls of powder snow, with lions and polar bears sitting next to each other drinking Sierra Nevada Pale Ales.

That is strange. There are philosophies in the world that embrace the idea that we can be one and everything at the same time, but I think this is different. I don't want some freak of a zoo of martial techniques to convince me I can do everything.

I can't do everything.

Personally, I'm not so tall and have relatively short legs. I will never be nearly as "good of a kicker" as others better physically built for such activities and who have spent the time training so. But that's a farce of an idea anyway, because what defines "better kicking"? Perhaps I won't have the range or strength or speed of another, but if I have better timing, and my kicks hit when others' don't, then mine are "better" right? That's not specifically tae kwon do, or the "best style" of kicking, but it wins.

Nature is composed of seemingly separate but complete and interconnected self-sustaining systems. We can easily find a kind of perfection in this. Mankind's buildings and contraptions are different. Leave civilization be and it will deteriorate and eventually disappear into nature, which will keep thriving. Actually, I'm not so naieve as to push this analogy the whole way through, because there are holes. But the general point it is, there is a huge difference between "nature" and mankind's constructions, and the limitations of the latter are staggering in comparison ... in my opinion.

What are our martial art systems like? When we say that we want to have or embody a "complete" system, what do we mean? Do we mean being "masters" of every martial art ever mentioned, more like my analogy of Mt. Everest on a beach, or a complete system more like that of the wilderness of Toyama? Tai chi chuan can be considered a "complete" system, and yet it doesn't seem to have the same advantages as some other "complete systems", which in turn have aspects that tai chi chuan does better. To some extent, I would say that there are things we could call "complete" martial art systems that stand similar to the different ecosystems of the world. Each contains enough of everything to survive and flourish, and yet don't have "everything" in the world.

But we still run into a problem here; the issue of man's logical tweaking and design. This is lessened by the influence of many instead of one, a vast range of generations instead of one moment, and the employment of intuitive motion instead of purely calculated design ... and yet it's still limited, as a system. There are differences between one man who has practiced for a year in ten different styles and set up his "Rex-kwon-do" dojo in some stripmall, and a man who practices a style like tai chi chuan that has been developed for centuries in local traditions, but they still stink with a name. Our systems will always be in the realm of the design of name. As long as the system has a name, it has a limitation. As long as the system has a thought, it will die. Take humans out of the situation, systems don't exist.

Is it possible to be nature instead of a system? Can we be something even if we don't exist? Can we be ourselves, and yet be like a particular ecosystem, and thusly be complete? If there is thought, it is not it.

It's not just Mt. Everest and beaches, lions and polar bears, rainbows and snow. Perhaps we could trap all of these in our laboratory, everything science has ever tested ... and yet we will never ever know if we have it all ... because we are thusly limited by our thought and apparatus. It is an illusion. Our thoughts are illusions. They are dying pictures, and so are dead.

Why do I practice the martial arts?

To realize a relaxed spirit.

Why do I desire to have a relaxed spirit?

Because everything happens in that flow of relaxation, and the feeling is good.