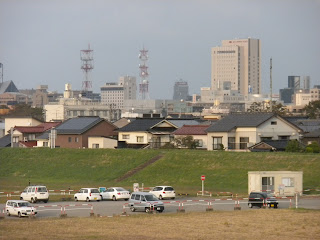 This is where I live: Toyama City. Since I won't be going to aikido nearly as much as I used to, I will probably be writing a lot more about this very strange and interesting place I live in. That being the case, perhaps an informal introduction to the place would be a good way to start.﻿ 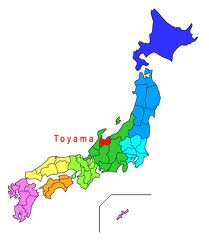 There it is! Right exactly in the middle of it all. Well almost. Actually, I'm pretty sure the geographical center of Japan is located in the prefecture south of Toyama, Gifu. But anyway, Toyama belongs to that green region on the map which is usually called Chubu, central Japan. 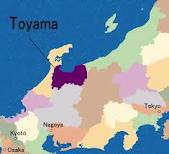 Here's a little closer look at Chubu. To get a little more specific, Toyama belongs to the Hokuriku region which is comprised of the prefectures in central Japan that are located on the Sea of Japan. Starting from the left of the picture, Fukui, Ishikawa, Toyama, and Niigata (kind of a swing prefecture that is sometimes considered Hokuriku and sometimes not.)﻿

Here's the prefecture itself. Homely don't you think? Enclosed by other prefectures except for one side which is the Toyama Bay. The blue line going from left to right is the main JR railway. Basically, to the south and east of it mountains rise like a giant wall cutting Toyama off from the other side of Japan. Though there is one train line that goes south right through the center of the prefecture and into Gifu towards Takayama and eventually reaching Nagoya. For two years I lived in Kurobe City, which is located at the top right section of the Toyama Bay just before the coastline starts running to the east. In Kurobe if you go to the beach, you're pointed west looking across the prefecture and the bottom of the Noto Penninsula of Ishikawa. Kurobe is a small to medium sized town located conveniently next to great access points to the mountains for biking, and close to Niigata prefecture for snowboarding. But now I have moved to Toyama City (which is usually just referred to as "Toyama", which I may do as well, please excuse the confusion), the capital of the prefecture located directly in the center of the map around the railways. 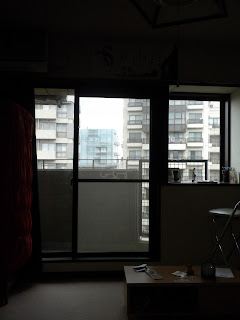 And here is my humble abode, an average size mansion (apartment) located on the 7th floor. No three tatami room palace like I had in Kurobe, but for Toyama it's a good setup. Other rooms in the complex face brick walls and are smaller in size. Mine at least is one the 7th floor providing an interesting view with a river famous for cherry blossoms just below. It's taken me a while to get used to it, but it's starting to feel like home. Except one thing ... the sinks stink. I've poured drain cleaner down them, have air fresheners, but it still lingers. I'm contemplating the next step ... recommendations for dealing with putrid drains would be GREATLY WELCOMED! 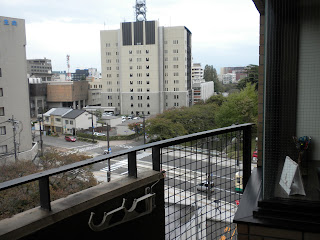 Ja JAA! My balcony view. That portion of the road you see is actually a bridge, and the greenery on either side are the cherry blossom trees that line the river below. If you follow this road to the left for a fifteen minute walk you'll arrive at the train station. This is a pretty ideal location for a bum gaijin with no car. At night you only hear the bugs and the wind; thanks Toyama for really not being that big of a city. However, from the morning on, the thundering blundering of the street car which runs on that street is heard every five minutes or so. Oh well. I'm trying to wake up earlier anway. 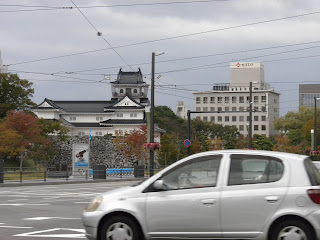 Another benefit of my location is I'm right next to Toyama Castle. It doesn't have the fame of Osaka or Himeji, but it certainly adds to the charm of the city.

The funny thing about living in Toyama now, is that for the two years I lived in Kurobe I dismissed the city as the biggest waste of time and space in the prefecture. The proximity of the ocean and mountains offer some amazing things particular to Toyama Prefecture, but Toyama City? It seemed just a grey sprawl in the center of the prefecture. To live in the city, separated so from the natural wonders was inconceivable. And yet, here I live, right in the center of it. But you know what, it's better this way. I have a special affinity for western Toyama inaka country towns, and I actually do most of my work there, commuting to Kurobe and its neighboring towns of Uozu and Nyuzen three weeks out of the month. But for living? I have a lot more options and inspirations here in this strange city. Strange because of its seeming incongruities; a phenomenon that is applicable to Japan as a whole. 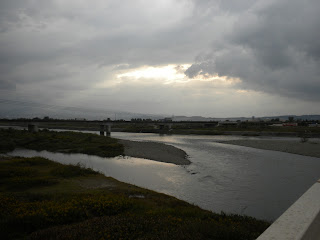 Anyway, I look forward to doing experiments in the city in order to more fully understand it's constitution and direction. Maybe you can learn more about it or your own home in the process as well.﻿
Posted by Zacky Chan at 12:47 AM