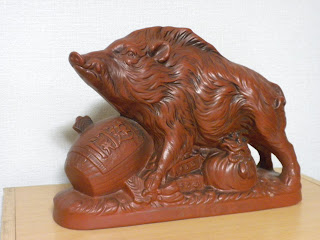 ﻿
Here is the newest edition to my developing abode. As I was walking to aikido one night, I passed a used antique-esque store and found this small-medium sized something which pulled me into a kind of vortex. I picked it up and paid the 500 yen convinced that I had just made a huge score with a small price. But it's more than just a decoration. From the moment I saw it, I've felt an extraordinary connection that borderlines some kind of idol worship. It's all unexplainable for me right now, but this wild boar figure and I will be going through this winter together. You could call him a kind of mascot, but that's too limiting.

My beef with Taosim is that it has way too many systems. "Huh?!" You shriek in utter amazement that such a phrase could be used to describe the philosophy that rejects the concept of systems altogether. I suppose I have confused myself as to what exactly I'm talking about again. Maybe I mean that the practices that rely on Taoist theory are too ... too something. Too much? Too complex? Well, that just makes me a whiner. An American baby who wants the satiation of my spiritual angst to be given in one free guaranteed swoop of comfort ... right now and forevermore.

I look to Taoism for inspiration, and so I read about traditional Chinese medicine, martial arts, meditation, diet, and cosmology. It's damned interesting, but I continually find myself stuck in an idealistic philosophy where all of these must converge on the highest level in order to reap the benefits. What benefits? Perhaps this is my problem. Somewhere after I am motivated by interest, it becomes obsession, and there arises something that I want. Until I am a skilled practitioner in all of these fields considering Taosim, I feel I am a waste. Then I'm back in the mud with all of my peers who I subcionsciously seek to separate myself from. In some philosophies, we are advised to cultivate emptiness. From that void, what arises is our true character. Is this conglomeration of obsession and competition and need the true character of my spirit? Am I misreading the signs and texts? The result of this is fear. My exploration of Taoism often agitates this psychological tendency of mine.

Various interpretations of Buddhism will do the same for me as well; requiring high levels of purity and perfection and abstention in order to realize one's life. I just can't understand the "why"s and "how"s of it all anymore. It's like a glass palace in the sky. The fear of it shattering render me sterile.

Perhaps I'm too deep in the woods to see above the treeline.

And so I walk with my oribobo. (When I bought the small statue, one of the girls at aikido said I should call it oribobo. But then I showed it to my girlfriend and she said it was usually a name for something smaller and cuter. I mentioned the name again to the aikido girl, and she corrected me with the name, but I don't remember what it is. So, until I find out what I'm really supposed to call it, it will remain oribobo, a name I've gotten used to and find it quite fitting. Apologies to any Japanese proficient readers who recognize clearly my stupid gaijin mistake.)

I walk through the woods with my oribobo. Everyday we forage for food and search out adventure. It's a quiet companionship, but I like that. We have no home to return to, so it's always onward down the path, wherever we may find that weakest part in the grass which delineates our direction. Need is determined by necessity. Thoughts vanish quickly if the environment calls for attention. The next meal isn't worried over, because if we die, then we're just dead, and won't need to eat anyway.

I'm not sure about that crystalline palace in the sky, but I'm not going to try to look for it anymore. Maybe one day I'll see it again. Maybe the forest will burn down. Maybe I'll eventually find myself in the plains. But down here in the woods, it's just me and my oribobo.
Posted by Zacky Chan at 5:44 PM