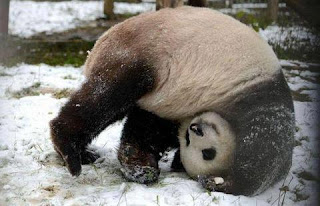 The main event of this seminar was a 7th dan (degree blackbelt) named Kuribayashi Takanori (栗林孝典) from the Aikikai Hombu Dojo in Tokyo. With him came Oyama Yuuji (小山雄二) a 4th dan. This seems to be the normal case for such seminars, at least in Japan: a main teacher brings one (or more) lower ranking member from their dojo. It helps for a teacher to have a familiar uke (partner) who will react properly to his techniques in order to effectively communicate with an unknown audience, gives the younger member a chance to watch and participate in such events in order to one day conduct them themself, and is usually a good model and source of information for the other participants as well.

The seminar ran as such:

On the second day, the last hour session was omitted, but the training sessions were stretched a bit longer. There was also time for a closing ceremony, which always takes a good chunk of time in Japan.

So, on with the juicy Aikido details.

Oyama Sensei was great. Young (maybe mid to late 20's, but it's hard to tell, he could have been early 30's) and full of fresh energy. He has great technique, but his focus was mainly on ukemi, the person receiving the technique. Actually, receiving the technique is not a good way to explain it, really, and Kuribayashi Sensei explained at length why it isn't. I say receiving the technique, because you usualy have two people, and one of them is predetermined to do so-and-so technique will the other person will be the body to practice with. So, that other person in a way is the practice dummy, but they are far from such. They are a living reacting skilled partner to practice a technique with. There are predetermined ukemi for particular techniques, but the uke doesn't just blindly follow through the motions. That is empty and meaningless aikido. The uke reacts to each motion from the tori (person executing the technique). If the tori does good technique and the uke reacts accordingly, then both the technique and the ukemi generally end up as they are supposed to. One cannot do the technique without the other, and the success of the technique depends upon both members.

When we practice, think about, and visit seminars about aikido, it is easy to often get stuck on just doing the technique from the tori side of things, but if the ukemi isn't correct, then there is nothing. Working with somebody who doesn't do the proper ukemi is probably the most frustrating thing in aikido. It's really not about being good at ukemi as much as doing it right. I suppose if you're good at ukemi, you can move faster, deal with more successful technique from the tori, and the ukemi may be less painful ... but that's really not important. That is something that happens after you learn to do it correctly, and spend a lot of quality time practicing. What's important is initially doing it correctly.

Ukemi is actually really simple if you follow the proper steps. Some of those specific steps I remember Oyama Sensei talking about were:

1.) When you are being thrown back and bend one leg to fall in that direction and eventually slap (breakfall) on the ground ... one should not just fall straight onto their back because our neck will whiplash and the back of the head will hit the ground, which is very very bad as this may result in concussions, uncosciousness, death, etc. Instead of falling straight back, one should fall on their side, reducing risk of head and neck injury, enabling a proper break-fall, and enabling one to do a high fall if necessary.

2.) When you are lowered, one should do their best not to bend their back, but bend their knees instead. This is in order to keep one's balance through the movement of being unbalanced. One's back won't be perfectly straight through technique, but it ends up being diagonal (45 degree angle with the floor) instead of flat (parallel) with the floor. This should be natural and easy. It's like picking up something off the ground. If you just bend with your waist, it puts a lot of tension on your muscles and puts you off balance. Also, if you're holding hands and walking with someone much smaller with you, if you bend your waist, it's uncomfortable and tough on the muscles and joints. If you bend your knees you reduce a lot of that unnecessary tension. Of course, it's a strange picture, and one wouldn't walk in such a way holding hands with someone that much smaller, but then again we also wouldn't choose to be thrown by someone in the real world as we are doing with ukemi. Ukemi is not a permanent situation, but a way to move through adversity and regain balance.

3.) When doing iriminage, in order to keep the back straight and bend the knees, it's OK and recommended to put your inside hand down to brace against the floor for a brief moment before you stand again. Also, one should look inside towards your partner who is throwing you. If you look to the outside, you are putting yourself further off-balance than you already are. It's like walking straight ahead of you, but turning your head and looking directly to the side. It's uncomfortable and will make you walk in the direction of your head. One should turn their head in the direction they are going, which is to the inside towards your partner in iriminage.

4.) MOST IMPORTANTLY! So so so very very very much importantly ... when you grip your partner's wrist, arm, whatever, in a technique, one must maintain the grip with the whole of their hand, or more specifically, the center of their palm. By grabbing your partner's hand, you are connecting with them, and you want to connect with them as much as possible in order to have good technique. I say this MOST IMPORTANTLY because it's soooo basic to technique, and it's something most people I've encountered don't do. This is what I'm talking about with frustrating partner's who don't do proper ukemi. The purpose of aikido techniques is to unbalance your opponent, and you can only unbalance your opponent is if they give a real committed attack. Most of the time, the partner grabs your wrist, you move to unbalance them, and they don't get unbalanced because they are not connecting with you. At that point, everything else is worthless.

Whoa! Sorry about that, but it's true. The last seminar in Toyama where a sensei from Tokyo came, the same thing was said, and immediately after, even sensei's from Toyama didn't do this simple thing. They merely went through the technique as usual and smiled and did nothing. This is the most frustrating thing in aikido for sure.

OK. So, ukemi is so super important in aikido, if you don't do that right, everything else is nothing. It's the most basic part of the art, but apparently a part that doesn't usually get enough attention.

This is a source of various issues with aikido in Toyama. It's political stuff between the different teachers here, and at a very basic level it is an issue with technique, or more appropriately ukemi. I don't want to spend much time on this issue, and so I will make it as brief as possible, but it needs to be said to understand basic things in aikido, and my particular situation.

When my current sensei was a lowly 2nd dan, he came to Toyama and looked for dojos to train at. He found the main one in Toyama City and began training. Though the teacher was much higher rank, maybe 5th dan, my sensei felt his technique was much better. The teacher couldn't do successful technique, because he couldn't do ukemi properly. Training was a huge waste of time, and the teacher didn't seem to recognize his own faults or desire to improve them, so my teacher started making trips to the Kobayashi Hombu Dojo in Tokyo to train. There he found what he was looking for, and started running his own classes in eastern Toyama.

The schools around Toyama, mainly the largest one in Toyama City, wants to organize a Toyama Aikido Federation. The hombu dojo in Tokyo also feels this way. By making a federation, aikido-ka around the prefecture, and throughout the country, and world I suppose, can unite under accepted levels of technique and better connect to practice. This is a good thing. However, in the way it is being conducted, my Sensei doesn't care to participate. The process requires a lot of talking, meeting, and aikido un-related business that would need to fit into an already busy enough schedule of working, living, and training. That's not so bad (though actually unbearable in a lot of ways, maybe), but the part is who this federation is with. In my Sensei's eyes, it's with a bunch of unskilled "teachers" who want to make Toyama special through beauracracy. My Sensei doesn't care to train with them, and all of this seems like a waste of time. However, the Hombu Dojo in Tokyo does seem to be encouraging this kind of activity in Toyama, and if they're going to keep sending teachers here, that kind of thing will be a requirement, it seems.

To be honest, I really only hear the side stories here and there, and even of that don't understand it completely, both linguistically and politically, but I think my impressions are pretty accurate. Honestly, I sympathize with my Sensei on this. Our dojo is doing just fine. Whether or not the federation is made, we still train well, and visit/receive other teachers from around the country.

Well, all this is necessary to the discussion, but has taxed me and probably you as well, so let's leave it at that for now. What did we learn?

Oyama Sensei was awesome and I learned a lot about ukemi, both its particulars and overall importance.

Dojo politics are lame. Just train effectively and have fun. That's what we're all there to do anyway right? Anything else, and I'll go learn about tea ceremony or calligraphy.

Check in next time for details on Kuribayashi Sensei's teachings and the rest of the seminar.