Why am I not as good as I was before?

That's where this whole conversation starts.

This is the essence of kyudo.

Back to the question of the day: Why am I not as good as I was before?

One big answer is:

But what exactly is concentration?

One day a long time ago another teacher said to me, "Zac, you're concentration power is great."

It was a complicated compliment taken very simply, because I didn't really know how to understand it. I was just happy at the compliment and kept doing what I did.

I translate what the teacher said as "concentration power" because that's literally what he said: “集中力”, (shuuchuuryoku). It's a bit redundant as you could probably just say "concentration", but for some reason I think it's closer to the feeling because it relies upon a certain strength. It's a force you use to overcome others, and one you can strengthen with practice. 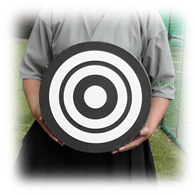 How about an interesting story.

The other day I was at practice and my sensei was working with a very advanced student. His form is great, but he seems to do much better when practicing on the makiwara (practice straw bail) than when at the target. This is fairly common. At the straw bail you're shooting at something only a couple feet away and are completely concentrating on just your form. When you stand at the target, it changes completely as you're aiming at something much farther away and concerned about hitting the target. This student gets phased by something when standing at the target (like myself! and many others I imagine), and so my teacher introduced a practice in order to concentrate his focus a little sharper. He told the student to take away one of the targets and find a tiny white flower to aim at instead. The student did this and then aimed at the target. Of the three shots he made, all of which would have hit the target, and two of the arrows were in the same exact spot about three centimeters from the flower ... that's amazing! By focusing on one tiny little piece of white instead of the regular target which is 36cm in diameter, your focus gets a lot sharper.

I think when you first start shooting at the target, you focus greatly on the target itself. This is good concentration. But after a while you start working on parts of your form which takes conentration away. You go through periods of hitting the target and not hitting the target, and you get to a point where it's a 0 - 1 game, either you hit the target or you don't. Perhaps at that point you're not really focusing on the center of the target, but just aiming at this very vague space that is basically around the target. At that point you're probably doing a lot of other things well and putting your focus in places where it is needed ... but you are not focusing on hitting the center of the target, and that is not good.

There are a few different kind of targets used in kyudo, but the most commonly used one is called the kasumi-mato. Sensei told me the name and asked me if I knew what kasumi meant. I said no, and he then explained that it's like a really light kind of fog that slowly flows over a mountain. It's not so thick you can't see through it in spots, but existent enough to obscure what you're looking at. When you look at the target, it's a combination of black and white but the differing sizes of the black and white rings adds for an affect that is difficult to focus on. He also explained is looks much bigger up close because the outer ring is black and difficult to see from afar. Later on I looked it up and kasumi-mato is translated as "mist target". 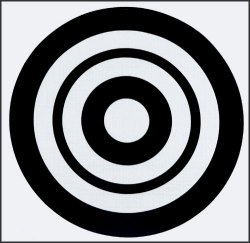 Focus your vision through the mist, forget everything, and just hit the target with perfect form.