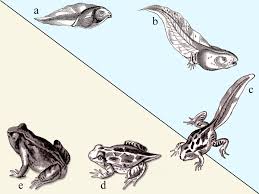 (not-at-school.blogspot.com )
The Change ... but not the one you probably expect.

A great change has occured, one that has been slowly churning, a pace not unlike that by which the continents move. Underground, out of sight, these primal forces have been metamorphosing and recently they have cracked to the surface. The change is one I never expected, and one perhaps I never wished to believe. But it has happened, and I see now it has been long in the making.

I mentioned the last kyudo tournament I went to, and that I didn't do so well though it was a great experience. I also wrote about going to kyudo on my day off and how I felt about that. The posts on this blog have been largely about kyudo, and discussions on aikido have become quite the rarity. My kyudo sensei keeps pounding on me, forging my technique, chiseling away at the frivolous excess. I keep falling down and getting up, each time redifined and more aligned with the target.

This is all not the result of outer success but inner turmoil. When I started kyudo it was just a flimsy trial. As I continued I never really gave it much credit. After receiving the shodan, it could all end and I would be fine. No matter the abstract reflections, my body and spirit have been there everyday toiling in the soil that blooms love. Something of a flower has budded. 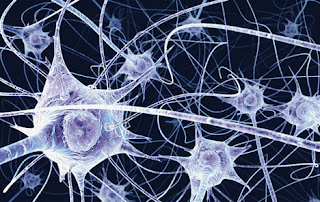 (life-engineering.com )
Since the great change two years ago causing me to switch jobs and locations, taking aikido training from three to four times a week, to three to four times a month, aikido has been hiding in the dark. On those tired nights I pilgrimmage to the dojo in the east and move, each time like a flicker in the shadows. Clumsily, forgettfully. Each is a great dream I can't seem to hold on to. In the past two years, parts of my aikido have naturally progressed, but it's overshadowed by a great slowing in the internal progress of my sinews.

I took my ikkyu test (one before the shodan [blackbelt]) and passed. I did well in many ways, I think. I did all of the techniques that were asked of me. I did particularly well in the jo and ken work ... parts that I have been able to hone and remember alone in my apartment. I actually felt best about the jiyu waza at the end where partners come at me doing one attack (for me it was katate-ryotedori [partner grabs one of your arms with both of his hands]) and I think something of my overall aikido-budo nature came out. But I could list endless details on small things that could have, should have been better.

"You did it, but something is missing. I know you're busy with work, but honestly you haven't changed much since your nikkyu (last test) test. You're good, but there's something missing. It's in the small mistakes, like when you started so-and-so technique earlier and I told you to fix it like this. You fixed it immediately, and you can correct things quickly, but those necessary details are not internalized yet. Of course it takes time, and you had a good ikkyu test, but ..."

I understand completely what he said, and could have said the same things myself before hearing him. I can do the techniques as I'm asked, I try hard, and I learn fast, but this is not at the core of aikido. What is deep in the bottom is heavily rooted natural technique that adheres to the principles. There is no fast way to do this, it just requires simple time and effort. I don't have the time, so I double the effort, and what comes out has no effect on that deep core of aikido.

I knew this from the start, but I've been trying to trick myself out of it. "Yes, I can do it!" What? Like I don't need time? As if I could just decide for time not to be the core factor? That is magic. That is defying physics and the world. That does in fact play a part in budo sometimes, but equally the most important part of budo is realizing the nature of the world that cannot be changed. This nature cannot be transcended. I cannot fly to the top of the mountain. It requires each step to be made by my own two feet, and it will take as much time as it takes.

This is all completely related to my future move to Kyushu. For various reasons the move has continually been pushed forward since May. Now, it looks like it will happen in November at the very earliest, probably December, possibly later. A huge part of this has kept me crazy about aikido.

Can I get the shodan (black belt ) before I leave?

Can I leave before I get the shodan?

Which will I regret more? Leaving before I finally achieve my number one goal here in Toyama, or staying months more just for the sake of this possession?

A great factor on this decision is what sensei and Ueno-san the dojo think. Until now, the plan was just take the ikkyu test, see how it goes, and then start the discussion.

I thought maybe if my test went phenomenally well, like it could have been the shodan test, I would've been happy, then something could happen and I could do magic and just get the shodan before I leave whenever somehow. But that is not how I felt, in fact it was exactly what I feared, a test I passed according to the qualifications, but not magical acquisition of aikido skill.

I talked with Ueno-san who is a huge reason for my love is the dojo. She is a woman in here forties who has been doing aikido with sensei for about twenty years and is a godan (fifth degree blackbelt). She lives in Toyama City as well so she usually gives me a ride home after training. During the rides we've had countless discussions that have been so important to my growth as an aikido-ka, and more importantly a person on Planet Earth.

We talked about the test and she said it was something to be happy about. Of course it wasn't perfect, but for an ikkyu test is was great. I told her how I felt about coming to practice as infrequently as I do and it's affect on real aikido ability. She quietly agreed, but also silently assured me that that's not so important. What is important is just enjoying the practice. She didn't say this, though she has before, and I know it well.

This is my greatest problem with leaving the dojo before I get my black belt: I love the practice I have with the people in this dojo. I also love aikido. It may be my favorite kind of budo I've ever experienced, but that's due to the people I've been training with. If I were to do aikido with anyone less, I'd do something else.

I do aikido with these people because I love to do so. I'm heartbroken about all of this because I can't train as much as I want.

Why don't I get a job during the day that allows me to go to aikido practice more?

Because there's no job available that I want.

Why don't I just stay in Toyama forever and continue to build myself with this dojo?

Because I want to go somewhere new.

Why do I need to get a shodan in Toyama?

The discussion about my departure to Kyushu lasted the whole hour car ride, and could have gone on for much longer.

A big part of the discussion had already been made a couple weeks earlier on the topic of earning rank. Ueno-san lamented on the phenomenon of people training until the shodan and then immediately quitting. All of that work put into the person and their technique to finally reach a level as fun and interesting as shodan, where you can really start developing deeper skill, to just have them leave. This also happens after other various tests. Someone takes a test and then disappears for a while. To teachers I think this must be very frustrating. But to many people it's natural.

It's what I will do in this case.

What could that mean for the big shodan?

It feels cheap. Underneath my skin it's like worms. Only going to practice to achieve the rank. Forgetting the true worth of training with the people you're with in that moment. Sacrificing time and essentially your life for the duration for this goal. Using your sensei just to get rank and then leave forever. Thank you, sayonara.

To ask for such a thing is beyond me. To quietly plot this until the end and then leave is equally impossible.

After all this time and finally bringing up the topic with Ueno-san, I realize it's something real. I consulted with her to hear her opinion because I didn't know. I don't know, so I ask. Isn't that natural?

But actually I did know.

All of this: the test, the practice, the discussions, they really are just one giant mirror for me to look back at myself. I brought up the topic because it's real, and because it's happening. It's not a matter of going or not, because I am. It is a dream that has simmered for so long and finally come to an unstoppable boil.

I cannot wait through another winter to just barely get my shodan in the spring and then leave. I cannot wait because I won't steal the belt like that, and I don't want to waste those months when what I want, what I truly want is departure to a new world.

I love my aikido, but it has grown small and dark. It breaks my heart, but that flower has been withering all the while through this fall. All along it has been such, now I look and see.

Then I turn to the sun, and see my kyudo bloom. It's unstoppable. It's so strong, alive, young, I'm in the spring of my kyudo here.

This is the great change: 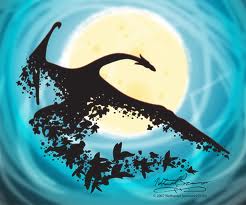 (www.elfwood.com )
Now I am more kyudo than aikido.

It's funny how both tragedy and happiness can bring us to tears.

The conversation I had with Ueno-san was one I didn't want to have, but one I had to. I'm happy now though in my understanding. Yet I still have one very difficult conversation to have, and that's with the head honcho himself, Sensei. He is an honest man, which comes off harsh sometimes, but that honesty also provides kindness and love abound. The experiences I've had with him sweating and being thrown over the past few years is a giant well of friendship. This isn't a conversation I can just have for a few minutes after practice, so I'm going to call him and see if I can meet with him for a couple hours to talk.

He's a buddhist priest which gives him free time in the mornings of strange days during the week, just like me. Hopefully I'll meet with him next week and have this giant nasty ball of a talk before I go home.

I asked for all of this. It's really what I wanted. I just didn't realize it. 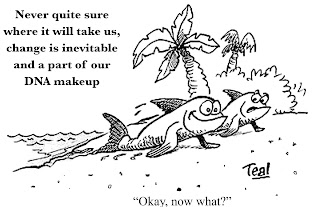