Hiking through Heaven and Hell 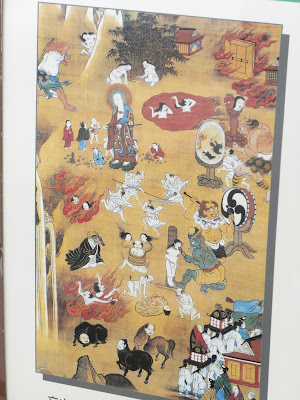 According to ancient local religion, Heaven and Hell were found in two mountains here in the Toyama prefecture: Tateyama and Tsurugi-Dake. Perhaps the most attractive features of the Northern Japanese Alps, if not the whole of them which stretch across the middle of Japan, they certainly stick out among the other still impressive peaks. The religion practiced around these mountains is not just Shinto (indigenous Japanese religion) or strictly Buddhist, but a hybrid of the two. If you come to Japan looking for the oldest and most magnificent Buddhist temples in Japan, go to Kyoto. If you're looking for the futuristic cities that fill most people's imaginations of post-modern Japan, go to Tokyo. If you want to find the most epic mountain ranges in Japan and a religion revealing the sharpest contrasts of heaven and hell, come to Toyama. 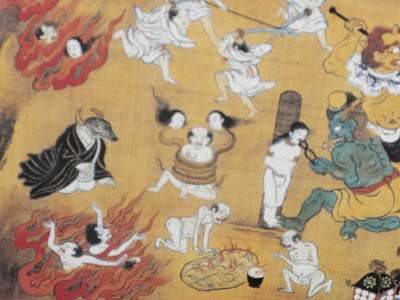 This weekend, I camped for two nights, climbing these two peaks of Tateyama and Tsurugi-Dake, with my brother and four other members of aikido. 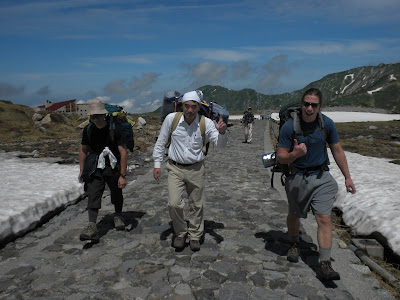 Since my brother decided to come to Japan during the summer, I have been eyeing this three day weekend, and approached my favorite of aikido members, Hosogoshi, about hiking potential during this time. Over a couple of months, it became what it was, which was an epic camping trip to both mountains. 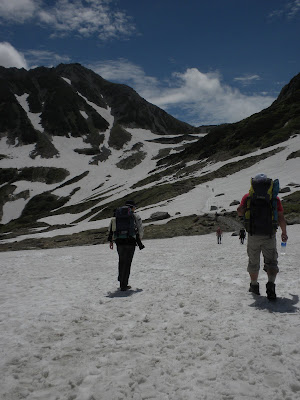 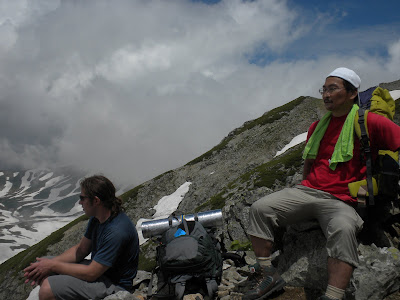 The first day we went to Tateyama town, which is the access point to these mountains, and started by taking a cable car, and then a bus to a resort area called Murodo, where we would begin the hike to Heaven, Mt. Tateyama. This is a very popular hike, that most Toyamaites do at least once in their life. It only takes about 3 to 5 hours to summit, but the views are remarkable, and Tateyama is considered one of "the Three Sacred Peaks" of Japan; the other two being Mt. Fuji and Mt. Haku (which in Japanese are called Fuji-san and Haku-san). 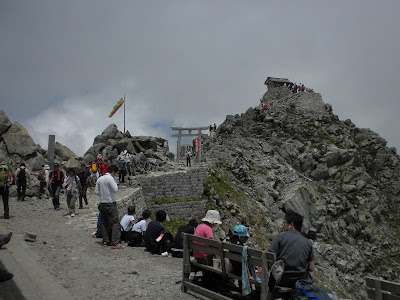 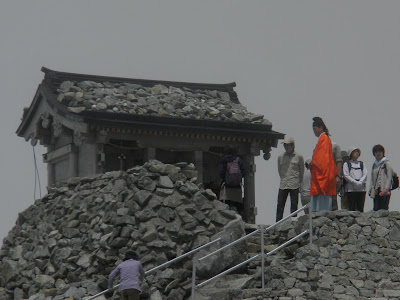 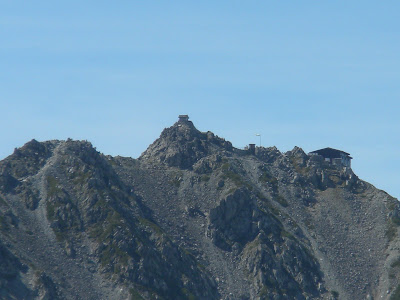 After reaching the top, we left the crowds and headed along the spine of mountains towards camp at the base of Hell; Tsurugi-Dake. It was about a three hour hike that descended from the peaks to the base of Tsurugi-Dake. 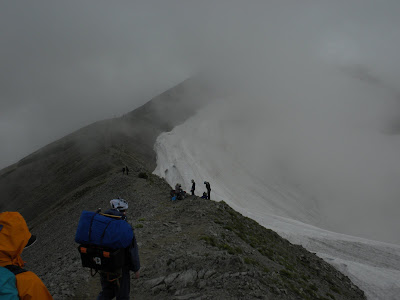 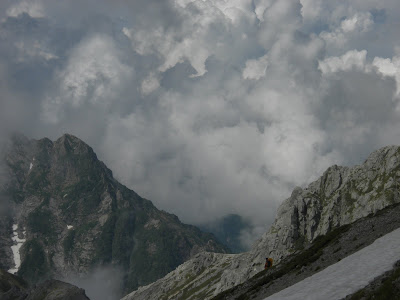 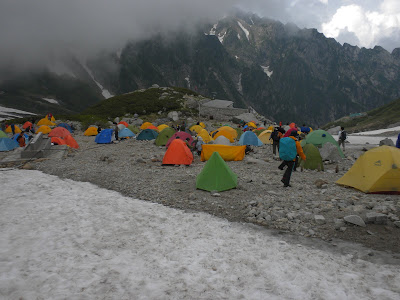 That mountain looming in the clouds is Hell; Tsurugi Dake. 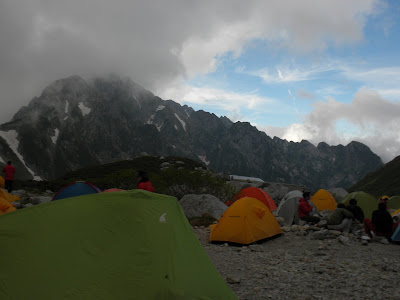 Then a delicious and elaborate meal for such conditions and whiskey, I hardly slept, and woke up at 3:30 in the morning to climb Tsurugi the next day. 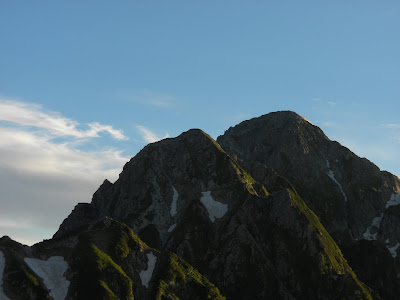 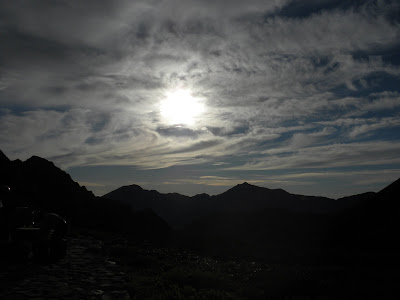 Our campsite is in the middle of this picture, though barely visible. 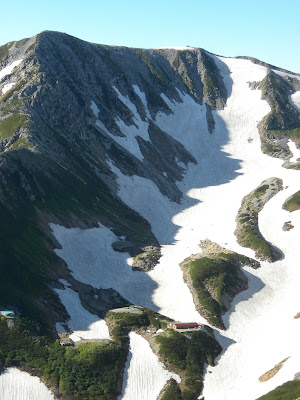 Tsurugi is famous for it's jagged peaks, and I have certainly never been as nervous climbing a mountain as I was when grabbing chains on the sides of Tsurugi where one's fall led thousands of feet below the cliffs. 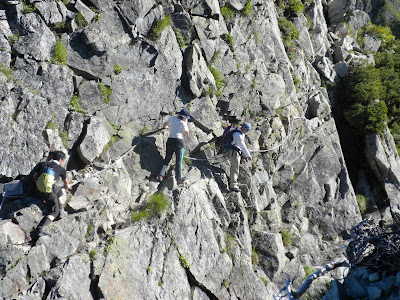 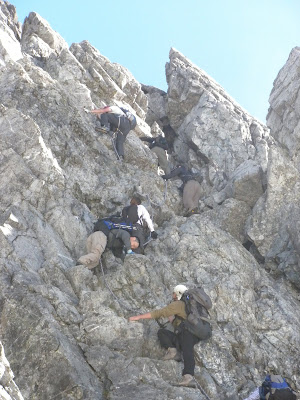 However, the top was glorious. One the one side, I could see the whole of the Toyama prefecture I lived in. And on the other, I saw the breadth of the country of Japan, which in the middle is the Japanese Alps. 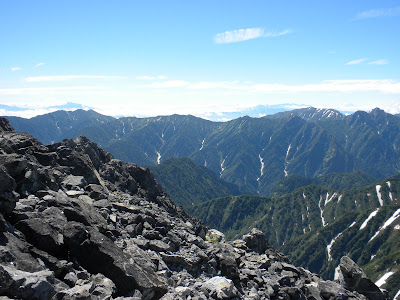 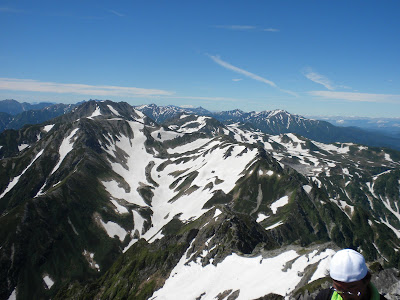 These are the baddest of aikido practitioners in all of Toyama: from left to right, Kanazawa, Hosogoshi, Ii, and Hana. 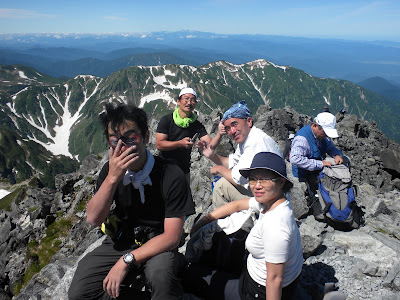 We were lucky enough to climb the mountain on a day clear enough to see Mt. Fuji. 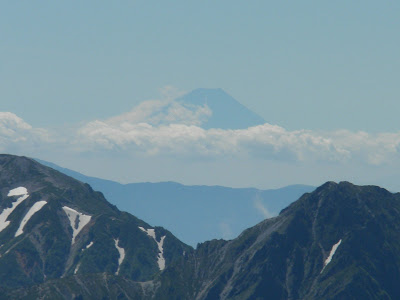 That day we descended to our campsite for more food and whiskey, and the next day we returned to Murodo for onsen and our collective transportation of buses, cable cars, and cars back home.
I have never been so proud to live in Toyama after climbing these mountains, and can only thirst for my next chance at an oppurtunity into the rivers and mountains of this unbelievable prefecture of Japan.
Aikido, mountains, onsen ... good drink, unbelievably amazing people ... come to Toyama.
Posted by Zacky Chan at 9:57 PM