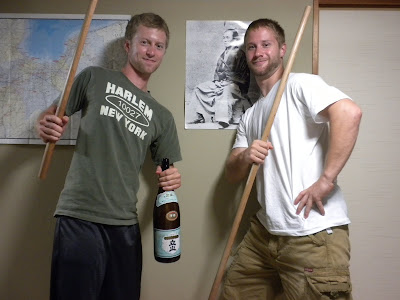 Joe is a reason to miss practice and even neglect your blog. He is my absoulute best-buddy from college in San Francisco, and paid me a visit for three nights this past week. But as you can see by the wooden weapons we are holding, Aikido was not wholly ignored. Due to this strange Japanese drink, we discovered some new techniques. 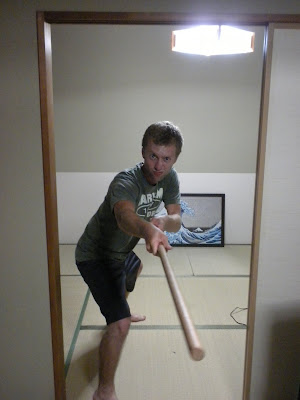 Joe was born in northern California, now lives in New York, but has spent most of his life in Phoenix, so I call this one the "Arizona Thunder Thrust." Actually Joe is no stranger to the martial arts. In his youth he practiced Tae Kwon Do for 13 years and recieved his third degree black belt. 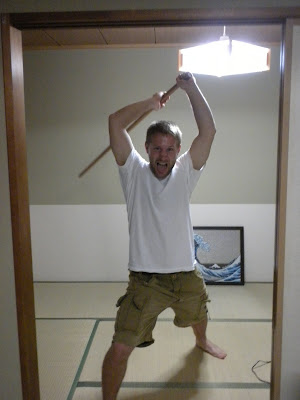 This one is called "Lightning Strikes from Tateyama Sake."

I'm not sure how well I can communicate these similarities to you because I have forgotten the names of the Aikido techniques and the Ba Gua technique, but let's try. What I saw tonight in aikido for the first time was a technique that brought you to a low squating stance with one of your legs placed snugly behind the opponent's, and had you pick up the opponent's legs for a double leg take down. This same technique is found in a Sun style Ba Gua Zhang technique from the Phoenix Palm which has you do the same thing: step so that you have one leg snugly behind the opponents (and at that point put them off-balance), you pick their legs up, and the opponent falls straight on their back, which can be very painful. I happen to really like this one, and surprised people with my somewhat instantaneous talent. I've mentioned similarities or experience in similar movements before from Chinese arts, but I think it pisses Sensei off, so I didn't say anything.

Next was an aikido technique that looked exactly the same as "Slant Flying" from Yang style Tai Chi Chuan. The big difference is there were big movements and circles involved in the set up for aikido, which made the execution a bit easier to make effortless. This is considering the fact that I am not adept enough in aikido to make it effortless, and ideally it should be equally effortless in Tai Chi Chuan, I think. Here is a picture of "Slant Flying" for those visual learners. 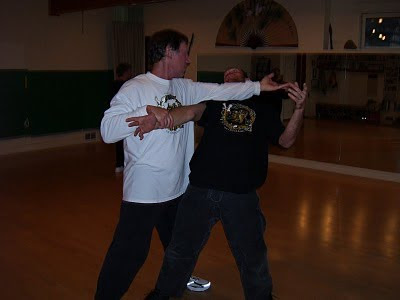 I wonder if either of these guys looks familiar to you. There's even a strange gaijin in the background. Mmmmm ...

On another serious note, I very much certainly did not want to go to practice tonight because I'm still recovering from the debauchery of Joe's visit, and have preparations to make before my brother comes to visit this weekend for three whole spankin' weeks. I was actually in the middle of a nap when my cell phone alarmed me to get up and get to training. Of course, I went. And of course, I'm absolutley 110% grateful and thankful I went for many many reasons. My reluctance to go stemmed from missing last training, not practicing aikido at all, and neglecting my body's health for the past week. All of these things gave me a great heaviness anchoring me to my tatami floor, but I reiterate, I'm so glad I went. Perhaps one thinks before jumping back into practice that they should just do solo stuff to get back into things, or ease back into training, but that is a bad idea because YOU SHOULD JUST GO TO TRAINING! Going to class is the most important thing, and undoubtedly the fastest way to get back into the swing of things. For me, when I consistently go to training, my entire life is affected. For instance, my diet, solo martial arts practice, sleep, my attitude, my laziness, doing or not doing bad things to your body. Out of all these factors in my life, the one at the center is going to training. If that is there, the others will fall into place. Just going to training instead of trying to do things backwards where going to training is the last thing, is a gem I have found, because I have certainly tried to do it the latter way. Thinking that I should only go to practice if I have stretched out everyday, practiced every technique I've learned, read every book, meditated, got 8 hours of sleep, brushed my teeth, whatever. That's all bullshit. Just go to training.

On a less serious note, Joe revealed this amazing video to me which makes me so proud of my European roots. After I saw this I swore that if I ever try to learn another language, it will be German. I'm sure the video will be funnier for those who will recognize the guy who had a phenomenal role in the amazing movie, "Inglorious Basterds." I hope you enjoy this short video.