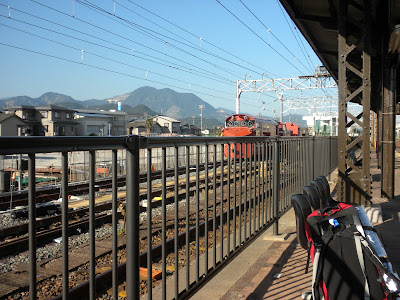 Lately, feeling a little burned out on biking and a yearning for the high mountains brought me to the peak of Shirouma-dake. Shirouma-dake (white horse mountain) is one of the highest mountains in the Northern Alps (2932 meters) and is located in neighboring Nagano prefecture. I've been eyeing this trip for a while, but because of it's distance from Kurobe and complications of transportation, I've been putting it off. Last week, after receiving maps and information from the vice-principal of my high school, who has a great interest in mountain climbing and biology, I gained the knowledge and confidence required for the trip. 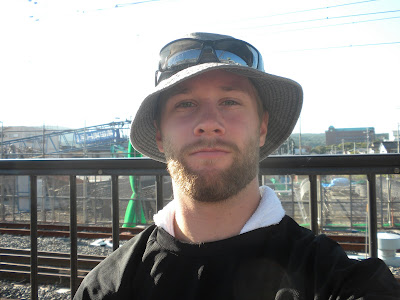 First, I would go east to Niigata prefecture, and then switch trains south to Nagano. At Hakuba, I then took a bus up to the trail head. After six hours of travel (three of which were waiting at train stations), I was ready to begin the estimated 5 hour hike up to Shirouma-dake. 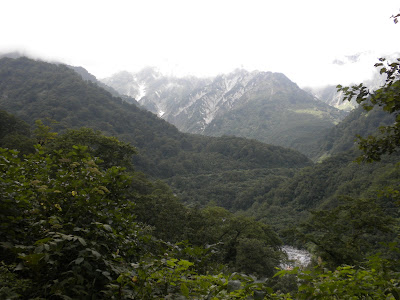 Hakuba is famous for being the location of the 1998 Winter Olympics. Last winter I went to snowboard and found the town full of strangely outfitted Japanese (80's neon pink, green, and purple snow wear) and more gaijin than I've ever seen in Japan. 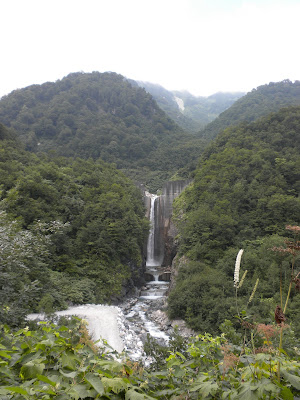 This was a huge trip for me as it was the first time I have ever been camping by myself, and in an area I wasn't very familiar with. The time I had was very limited due to school and transportation, but nonetheless, I was there doing it. 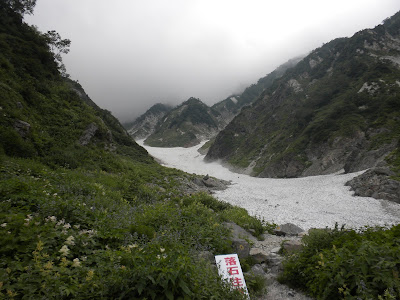 At Hakuba town, it was a very hot day, but once I reached this part of the trail, heavy clouds and wind were sweeping down the mountains. 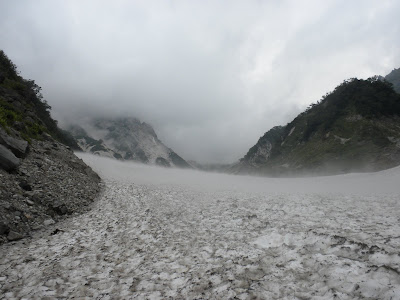 This was not a very fun part of the hike. An hour uphill on slippery snow and ice. But as usual, the scenery was epic. 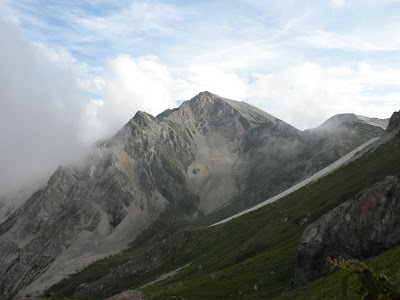 Periodically, the clouds would pass to reveal the jagged peaks that surrounded me.
I started the hike surging up the mountain with a great speed considering the trail and pack I was carrying, but for the last hour and a half, I began taking a rest after every 20 steps, then 10, then 5. Though it was only a 5 hour hike, any more and I would have had to change the pace considerably. Actually, I was able to make the trip 4 hours. Ever since hiking in New Zealand with Jolene and our friend Olivia, I've taken pride in slashing the expected times. This was no exception. Perhaps it's a little rough on the body though. 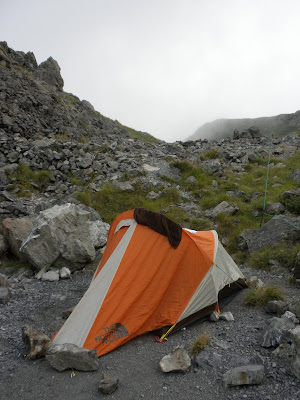 Ah camp. Here is Jolene's tent (thank you!). There were huts at the top, but to stay in them would cost around $75. Let me say that again ... $75! For a fricken wooden bunkbed! Camping was $5. When I checked in, I peeked inside to see what $75 luxury looked like in the mountains, and I shook my head in disbelief at this type of incredibly expensive phenomenon that is all too common in Japan.
After I set up my tent, I went inside at 5:00 to escape the bugs and declining temperature, and ate my peanut butter jelly tuna sandwich. At 6:00 without any company or books, I went to sleep.
This is perhaps the first time I really felt lonliness in Japan. On the hike up, I finally realized that 95% of my time in Japan is spent thinking about two things: Aikido, and Jolene. Here is the great dichotomy that blesses and tortures my soul daily. Aikido is the greatest mountain I have been climbing in Japan. But as I climb higher and higher, Jolene is farther and farther away, down below in some far off town. Thousands of miles away, practicing in the dojo, escaping to distant mountains, and burying myself in books about Buddhism, my mind is uncontrollably filled with thoughts of being back home. Being with the girl I'm in love with, my family, my friends, food and drink I enjoy, and starting a new unknown project and direction; these are the thoughts swirling round and round like a brewing tempest inside of my head. During the hike, my mind shifted between the polar opposites. "Yes, I must stay in Japan until I receive high degrees of blackbelts in Aikido. Only after that can I return home fulfilled." "No, what am I thinking? I have to go home as soon as possible to continue my life!" Each of these thoughts I believed genuinely, and they switched back and forth every minute. This is very stressful. Whatever, right now I need to go to sleep so I can start the return trip before sunrise. 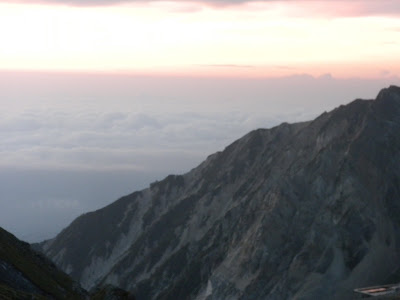 I woke up 2 minutes before my cell phone alarm went off at 4:00. I ate another peanut butter and jelly sandwich, packed my bags, and headed to the peaks to see the sunrise. 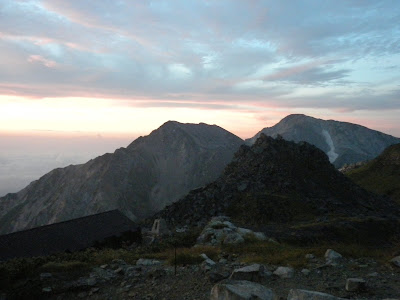 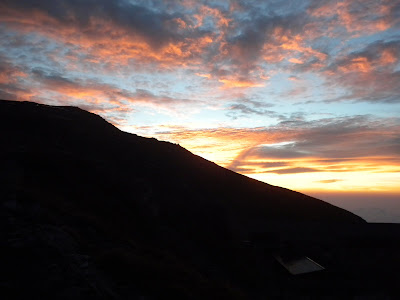 The mountains sat like islands above the sea of clouds that concealed the world of civilization below. 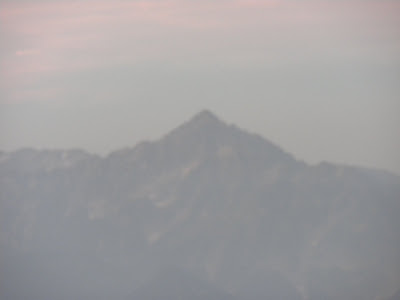 At the top, there was a Japanese man taking pictures of the sunrise. We began talking, and he seemed to be well experienced hiking in the mountains. I looked around at the panoramic view of the mountains, and spotted what I thought was Tsurugi-dake, "Hell Mountain" which I climbed with my brother and aikido buddies about a month and a half ago. I asked the man if that peak was Tsurugi, and he shook is head and said no no no, it's blah blah blah. I asked him if you could see Tsurugi from here, and he said no, it's too far away. "OK" I said, and a bit dissapointed started my return trip. 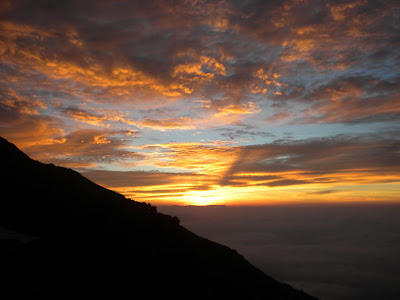 For the return trip, I would hike down along a ridge to Keyakidaira, the last stop of the Torokko Densha which is a train the runs through the Kurobe Gorge in Toyama prefecture. It is probably the most famous thing in Toyama and certainly Kubobe, and is worthy of such fame. My destination was far away though, an estimated 8 hour hike for healthy people in good weather. I was happy to be starting it so early in the cool morning temperature. 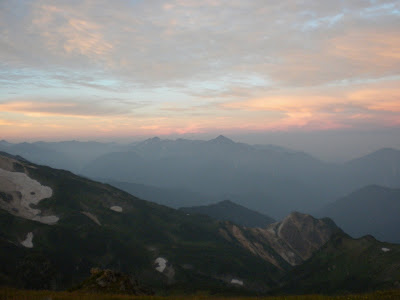 It's hard to believe the views from the peaks in the Northern Alps. As far as your eyes can see, it's all mountains. 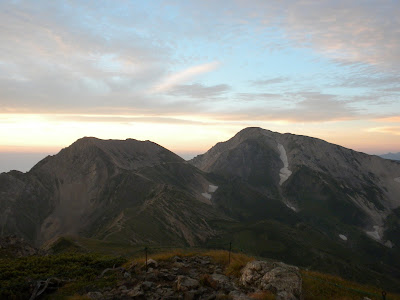 This is Shirouma-dake below. 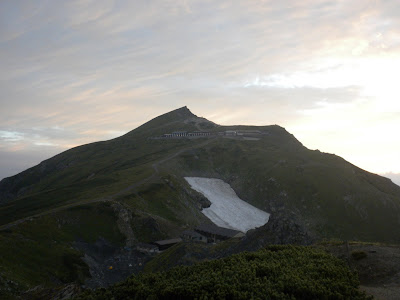 The sunrise and beautiful view gave me momentary bliss and peace, but as I resumed hiking, so did my thoughts. I took a deep breath and accepted that the next 8 hours coming down the mountain would be spent considering the decisions of my life. Yosh, let's go. 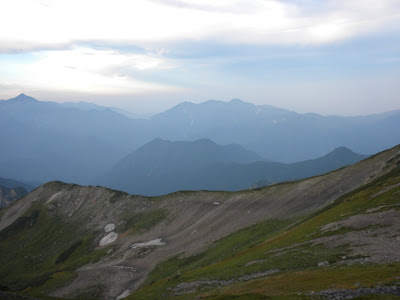 As soon as I stopped to take off some layers and take some pictures, the bugs swarmed me, forcing me into some strange monkey dance flinging my arms in the air. I can't even take a picture without a bug on the lens. 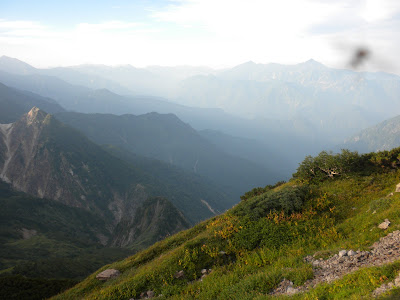 I couldn't stop looking at that mountain I thought was Tsurugi. It looks just like it. Was that man wrong? 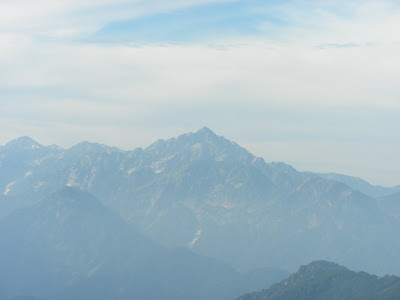 Yes! It is unmistakably Tsurugi! The man who so confidently assured me it was not, was wrong. I pridefully stuck out my chest as I realized that I am beginning to know these mountains better than the Japanese who so proudly call it their home. 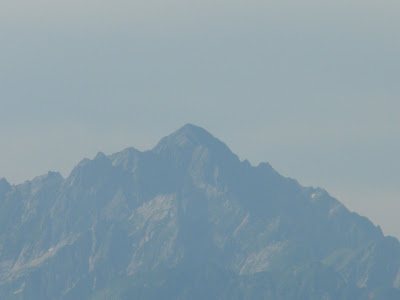 After two hours hiking along the high alpine mountain trail, the path soon descended into the forest. I was relieved to be in green again, but the path was extremely steep and hard on the knees. On such steep descents, it's easier for me to hop down them, which is very fast, but very hard on the body. Two hours later, I found a small hut and immediately went in to escape the sun, bugs, and take a well needed rest. 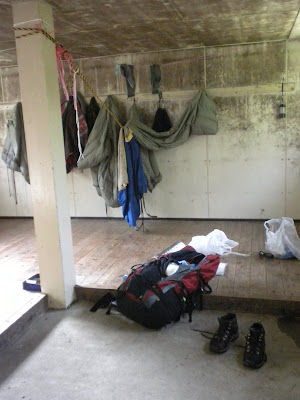 I ate another peanut butter jelly tuna sandwich and consulted my maps. I was relieved to find out I had made it a little more than halfway back in only 3 hours. That means if I didn't stop for lunch, I could return in 6 hours, compared to the 8 hours I was told would be the shortest possible, or even 12 hours if it was bad weather. Thoughts of beer and onsen at the end of the trail became more intoxicating. 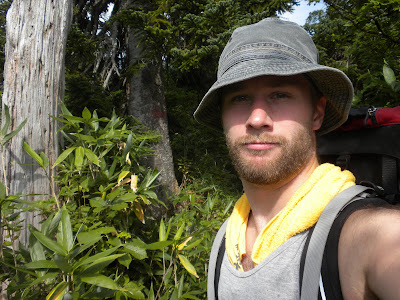 Rested and back on the trail, I began hopping down the mountain. Perhaps it's not in a dojo, or some happy home that I belong, but on a trail in the forest. 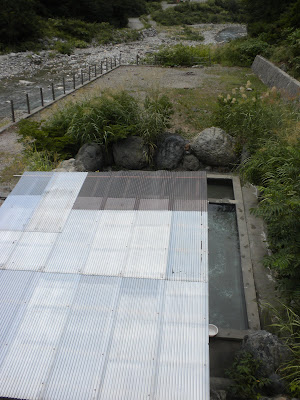 From that point, it was a very long and arduous 3 hours, but just like I imagined, onsen and beer awaited me at the bottom! Above is a picture of the onsen, but regrettably, not a very good angle. For the sake of naked Japanese men, perhaps it's better that way. 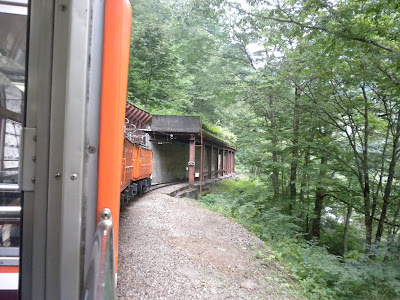 Here is the Torokko Densha I rode through the Kurobe Gorge and back to happy civilization.
When I was buying my ticket, I had a choice between two kinds of seats on the train. I automatically voiced the cheaper one by habit to the train attendent, but then immediately said, "Wait! Actually give me the nicer one." There's no way I was going to sit on a backless bench seat crowded with Japanese people taking pictures for an hour and a half when I could pay $3 more for my own window seat.
It is an amazing route on the train through the gorge, and should be ridden by anyone who wants to see the natural beauty of Japan, but doesn't have the time to go hiking in the mountains.
There are many dams and monkeys on the way back ... and even a castle. Like always, I have no idea what such a thing is doing deep in the woods in Japan. 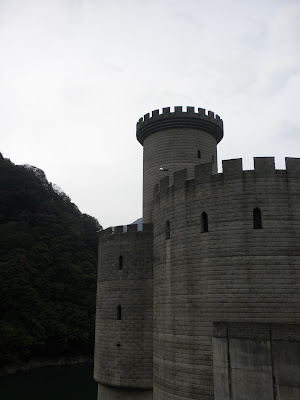 As I got off the last train next to the station by my apartment, I received a phone call from someone at the school office. As usual, my coworkers are mutually amazed and terrified of my solo mountain trips, and this phone call was from a very nice man in the admnistration office.
"Zac-san, are you OK?"
"Yes I'm fine. I'm walking home to my apartment right now."
"Did you climb Shirouma-dake?"
"Yes I did. It was amazing!"
"Sugoi! Are you OK?"
"Yes, but I'm really tired."
"Can you come to school tomorrow?"
"Of course. I'll see you tomorrow."