Lesson 20: Why You Shouldn't Use Strength 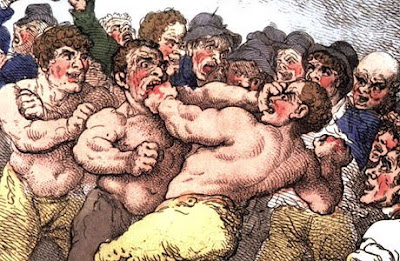 This is in reference to being an uke (the attacker). Nobody in my class ever approaches being the uke by stubbornly using all their strength to try and prevent you from doing a technique. If anything, it's me that sometimes unconsciously has done so. But perhaps with medium skilled and strength-using ukes, perhaps you could say the tori (person "doing" the technique) has a natural tendency to match that energy. Tonight we were working on a particular shiho nage that required a lot of body movement, and at one point, I was paired with two of the smallest girls(though very skilled blackbelts) in the class. When they attacked, it was sooo much softer than the other members of the class, that when I started doing the technique with my usual tempo and body use, I totally messed up. I could certainly throw the girls any way I wanted because they were being completely soft ... but that's not the point of Aikido! First of all, this excercise is not a fighting scenario. Secondly, if I did throw them any way I wanted and they were good uke, then they would manage out of it just fine. Practice runs this way because it is the most economic way to learn a technique according to Sensei. So when I was with these two girls, first I had to slow down so I could control my movement better, be sure I took responsibility for keeping a connection between us, and execute the throw exactly as I should because they were going to go any place I took them even if it was wrong. Due to the extreme softness by the uke, I think my technique was vastly improved as far as control and small details are concerned, which are a pretty important part of Aikido techniques.
In some dojos, beginners are asked to perform techniques against partners who do everything they can to resist the technique. If a student without the necessary skills is asked to do so, I would assume that 99.9% of the time they are going to rely on the muscle strength they have to execute the technique, which is a slow and cumbersome way to learn a technique. Sensei will ask me or other uke sometimes to use whatever strength they have, and that's perfectly fine, because he knows the angles and execution of the technique well enough to use the uke's strength against him. Aikido is not only about ukes and opponents just giving it to the tori. I can understand how that is so hard to see though without experience in the art and only seeing it from the outside. After 8 months of training, the softness is still revealing it's legitimizations.
Aikido is not magic or strength, it seems to be finding the right angle and position. This is also why we must work in Aikido with nanto naku (mentioned two posts ago) and kankaku (feeling). The exact point is going to be a little different for everybody, so we should train our bodies to quickly find the entry point we can use without muscle strength.

If you're always practicing straining your muscles in martial arts, why don't you google image some pictures of hernias and hemorrhoids and see if you want to keep taking those risks.