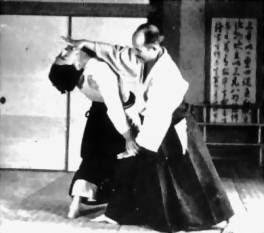 I have stumbled upon this thought when trying to explain aikido people. More specifically, why every movement between the tori (thrower) and uke (throwee) seems to be so controlled and why aikido may look to be so staged.

In the martial arts I have practiced for significant periods of time (tai chi chuan, Hawaiian kenpo, aikido) all have waza (techniques) that begin and end with a single movement (a push, punch, or atemi) as well as those that have longer strings of movement. Those that have more than one movement rely upon a certain reaction from the partner. In Hawaiian kenpo, movements after the first depend upon the anatomical reaction of the opponent to the strike you have delivered. For example, if the opening movement calls for a strike to the stomach, it is expected the partner will lean forward covering their stomach, revealing their head and back in front of you revealing an opening for the next movement.

In tai chi chuan, there is a partner form called san shou which is essentially a trading of techniques between partners back and forth. One partner attacks, the other neutralizes the attack and answers with their own, which is then neutralized by the parnter and returned, and so on.

In aikido, waza are performed between partners similar to Hawaiian kenpo in that there is one designated attacker or thrower (tori) and one receiver (uke). [But we shouldn't forget kotae-waza where the techniques practiced are counters to particular aikido techniques.] But the difference in aikido is that the partner usually doesn't just receive the strike, but will move strategically to protect themself from the attack. This is similar to the tai chi chuan san shou form, but the tori continues flowing through the various movements of the attack until a proper finish is executed. This adjustment by the uke in aikido can often seem strange because in a practical self-defense situation, it is rare that people will react and move as they are supposed to in a choreographed waza. To practice aikido waza with unncooperative partners, would be to greatly change the look of aikido I think.

Is this method of training in aikido helpful or practical in live unexpected violent interactions? If you only see or think of aikido wazas as practiced in the manner I described, no. To successfully defend yourself in the street, there are other arts more suitable for the quick learning of practical techniques, and you should also read the wonderful book "Meditations on Violence" by Rory Miller for a very sobering and practical approach to martial artsand physical confrontation in our modern day world.

Musing on this seeming lack of practicality of aikido in self-defense situations reminds me of a conversation I had with sensei where he boldly said aikido is not goshinjutsu (self defense(?)), but shutai (independent thinking(?) (Please anyone reading the blog with a greater Japanese ability that can help me discern exactly what my sensei was saying, leave a comment). The purpose of aikido is practicing aikido, not fighting, and not competition. This is said in the context that my sensei is very concerned with physical ability and not just philosophy, and is a practicing sandan (third degree black belt) in Kenpo. Furthermore, I remember asking one of my great tai chi chuan teachers, "Where are the devastating finishing techniques in tai chi chuan? All we're doing is pushing each other around?" The teacher wisely pointed out the clever wording of the phrase, self-defense. There is no necessary attack in this concept. He referenced his experience in judo, and said that it is less important for a judo-ka to know the finishing chokes and arm bars, than to know how to position yourself to nullify an attack. If you can do that well, there is no need for these finishing moves I was so curious about. (But he then showed me pushing can be quite devastating if it's projected towards the right object, or a throw to the ground can very well "finish" an opponent.)

Therefore, we must look to the initial movement and reaction of the tori and uke. Ideally and practically, if the uke did not react properly to the tori's first movement, the techniques would end or transition to a different technique. For instance, in most aikido wazas practiced in my dojo, the first movement includes an atemi (a strike to the partner). If the uke did not react to this initial strike, they would be hit in the face and finished, or the particular technique would change and adapt to the situation. Because the uke reacts strategically and intelligently to the attack, the technique progresses to it's particular end. Though the strike is not landed in this fashion of waza training, it most certainly occupies and puts the uke unocontrollably off-balance, leaving an opening for another atemi, another off-balancing movement, or the final throw or lock.

I now remember a very provacative post on the KyuRyu: Dragon's Orb blog by Sensei Strange who went to great lengths to define atemi and who that they are involved in all of his aikido waza in the tomiki tradition.

One last phenomenon in aikido that may confuse its viewers concerning realistic application is found in its wrist grabs. Often, techniques begin from a wrist grab from the uke (a common scenario found in all martial arts I've experienced). The strange thing in aikido, is that the uke will continue to maintain the wrist grab far longer than anyone on the street would. This is possibly the strangest and most unorthodox as well as frustrating trend I've found in aikido; that is until I learned that the particular technique requires the person to maintain the grab, or else the situation would change and require a different technique. Or how about watching people practice these moves without even touching each other? The uke reaches for the tori's hand, who moves it just before contact, and the uke follows the hand until the end of the technique where the uke is thrown without ever being touched. Surely a very strange sight for someone seeing it for the first time, but I have felt great success if practicing this method a little bit with the right intention.

Perhaps for those looking for the quickest route to self-defense, this is all very non-sensical and a seeming big waste of time, and they would do themselves a great favor to find a more appropriate martial art or teacher for them. But I believe these concepts I have mentioned here gives aikido is sophistication and beauty. Techniques are dependent upon the strategic reactions of the uke and tori in particular techniques, making for long strings of very specific and complicated movements. If they are not adhered to, then a different technique would be used to end the interaction. This drastically changes the view of aikido from a completely staged and unrealistic dance, to a very practical and effective martial art.

Beyond crude antagonistic competitions for dominance lies a poetry of movement that is both practical amid chaotic confrontations as well as pleasantly harmonious. This is the balance and sophistication I seek in the martial arts.
Posted by Zacky Chan at 3:49 PM