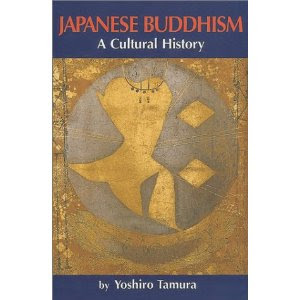 In my quest through Japanese religion, I have just finished reading "Japanese Buddhism: A Cultural History", written by Yoshiro Tamura. The book discusses Buddhism in other countries, Buddhism in Japan, Japan before Buddhism, other religions in Japan, Japanese history, Japanese anthropology, and modern perspectives, all in a book that's only 232 pages. For such a daunting task, Tamura has done an excellent job in making such a long and complicated subject approachable to those wishing to learn about Buddhism in Japan. The book begins with a wonderful perspective on the pre-Buddhist Japan and how it affected the future growth of Buddhism, progresses to bring light upon the key figures in Japanese Buddhist history, and then flourishes with it's explanations of Buddhism during the Kamakura and Muromachi periods, which is where we find what we may call the most Japanese of expressions of Buddhism. Ironically, it is at this point in the book where we discover the decline of innovation in Japanese Buddhism at about the Tokugawa period, as well as a decline in the content of the book, in my humble opinion. At the beginning of the Tokugawa period, according to the book, it seems Buddhism was for the most part a tool to be usurped by political rivalries, and so the descriptions in the book thereafter are more about historical dates and times of those concerns instead of Buddhist belief. I believe the book's strength lies in the first 100 or so pages, but it's fault lies in providing limited information where more thorough explanations of Japanese history and Buddhism are needed. So, in this entry, I will cite Tamura's interpretations of how the Japanese adopted and innovated Buddhism, the particularly Japanese Buddhism that emerged during the Kamakura and Muromachi periods, and the transition of Japanese culture from Buddhism to the arts.

So first, how did Japan greet Buddhism?

"When considering the development of Buddhism in Japan, we must always ask ourselves how Buddhism responded to the pre-Buddhist Japanese way of thinking and how the Japanese perceived and assimilated Buddhism. In the course of Buddhism's long travels from India through Central Asia to China and on to the Korean Peninsula, it adapted to a variety of civilizations and was modified by the various peoples who adopted it. Yet a common Buddhist spirit or way of thinking remained as a strong undercurrent, nourishing and guiding each of these developments. Our question is whether, upon arriving at its final destination in East Asia, Japan, this common undercurrent of the Buddhist spirit continued to flow. In other words, was Buddhism in Japan completely Japanized, transformed into a unique religion different in essence from original Buddhism?

"...Buddhism arrived in Japan as a fully developed, cohesive system with a great volume of scriptures and commentaries. Japan, which already had its own patterns of culture and thought, was faced with all the paraphernalia of a great world religion. To learn what these patterns were, we must review the nation's origins and the first traces of Japanese culture and thought."

Tamura then begins explaining that Japan continued a hunting and gathering lifestyle longer than most other civilizations around the world at the time, despite equal technological advancements.

"Thus there were no crops to be stored, and there was no accumulation of wealth; as a consequence, social classes did not arise, nor did social groups form around authority figures. A low social consciousness and undeveloped material civilization were characteristics that remained with Japanese society for some time. That does not mean, however, that the Japanese were 'primitive.' Indeed, these very characteristics have sometimes proved Japan's greatest assets. The long dependence of the Japanese people on hunting and gathering is what made them so responsive to the natural world and led to the development of such rich aesthetic and emotional vocabularies."

Like most other ancient civilizations around the world, animism (belief that spirits dwell in animate as well as inanimate objects) was the religious view held by ancient Japanese, and was eventually developed into modern Shinto.

"It is fascinating to note that animism has remained part of the Japanese religious tradition down to the present. Buddhism rejects animism in principle, but the current of animist belief runs so strongly and continuously through Japanese culture that Buddhism was influenced by it almost immediately upon its introduction to Japan. This is one manifestation of the Japanization of Buddhism. The persistence of animistic beliefs in Japan leads some people to infer that the Japanese religious consciousness is undeveloped. It is the ancient inclination of the Japanese to live in close accord with nature, pointed out above, that has sustained animistic worship of nature to modern times. But to conclude from this alone that Japanese religious consciousness or thought is undeveloped is premature."

It is through the synergy of indigenous animistic beliefs and Buddhism that we find a very Japanese religious something.

"In general, the Japanese affirm the world and humanity as they are and do not seek a realm or a state of existence that rejects or transcends the natural world. Several reasons can be given for this mindset. For one thing, though there have been many prolonged and bloody contests for power and authority among the Japanese, the nation was never successfully invaded or ruled by another people before the twentieth century, so that the Japanese never had to face the bitter reality of occupation by a foreign power or submission to foreign beliefs."

Here's where it gets very interesting to me, but also very brief and vague.

"For another, Japan's climate is temperate, and the country has no vast spaces for people to wander in. The Japanes tendency to remain firmly grounded in the natural world has been at times a strength, at times a weakness. This was the environment of thought, feeling, and belief into which Buddhism was introduced, a religion that rejects reality as it is - the phenomenal world - and teaches a way to transcend it."

Raised in temperate islands myself, I've found it remarkable that I have always been drawn to other similar environments around the world like the British Isles, Greece, New Zealand, and obviously Japan. I would love to read or write more on some connection between small island nations and their effect on the human psyche.

Tamura then begins to chronicle the arrival of Buddhism into Japan during the Nara period and it's progression over a few centuries. During this period we start to see Buddhism's affect on poetry in the Manyoushuu (collection of ten thousand leaves) written some time after 759 AD.

"If I could be but happy in this life,
what should I care if in the next
I become a bird or a worm?"

"All living things die in the end:
So long as I live here
I want the cup of pleasure."

From a Buddhist's perspective, isn't this very un-Buddhist?! Buddhism is about transcending our current illusory state and leaving sensory pleasure behind isn't it? I think this is where we begin to see a specifically Japanese interpretation of Buddhism; one that seeks to find enlightenment in the moment we are in, regardless of your situation or karma even.
"Instead of expounding the truth of Buddhism in terms of rhetoric and logic, the Japanese prefered to express their understanding in the language of feeling."

But it's not just feeling. It's something about one's relationship with reality. The hermit is a common theme in Buddhism, and present all through India, Tibet, China, Korea, and Southeast Asia, but what about those in Japan?
"These recluses seemed to wander, rootless, in the world, but they did not seek a realm beyond the human. They were in retirement not away from the world but in it."

Another interesting trend Tamura points out, is that in ikebana (flower arranging), it is desirable to put flowers that are just blooming next to those that are wilting and dying. The wide array of life and death in a vase of flowers.
"To search for enlightenment in contrast to nonenlightenment is to cause confusion."

Mentioning this prevalence of Buddhist notions in flower arranging, let's see how Buddhism has affected other arts in Japan.

"In the Muromachi period many activities were cultivated and developed beyond their original functions into arts: the tea ceremony, flower arrangement, and incense appreciation are prime examples. As Eisai's famous work Kissa Youjou Ki (Tea Drinking for the Cultivation of Life; 1211) attests, tea was first appreciated for its medicinal properties. Only later was it drunk for its taste, and finally its preparation was developed into a ceremonial function. Flower arrangement had its origins in the decoration of Buddhist altars. Gradually its religious import lessened and it was practiced to beautify daily life and, eventualy, as an aesthetic pursuit in its own right.

"The same tendency toward aestheticization was seen in medieval painting and architecture. Ink paintings, for example, were originally the work of Zen priests, and Zen personages or anectdotes were frequently their subjects, making them, in a sense, religious paintings. But in the Muromachi period landscapes and other secular subjects were increasingly depicted, even by Zen priests."

"The arts of medieval Japan developed and spread in the context of the daily life of the people, and as these arts were refined, their enjoyment and appreciation became a pastime of the Japanese in general. The arts of the medieval period - Japan's Renaissance, in some ways - affirmed life, sang the praises of the world, and aimed to bring pleasure; and Japanese Buddhism evolved in response to this spirit.

"It is widely held that the foundation of Japanese culture and art as we know them today was laid in the Muromachi period. In that regard we must note that this period was also a time of systematization in Japanese intellectual life, and that this systemitization contributed to the development of culture and art. It was Buddhist practice that supplied the apparatus for the systematizationof both thought and art. One striking example is the oral transmission of the secrets of an art. Oral transmission was originally the means by which the Tendai doctrine of original enlightenment was passed from master to disciple, and the tradition of the oral transmission of essential teachings soon spread to other sects of Buddhism and to Shinto. In imitation of this practice, secret oral transmission from master to disciple evolved in many of the arts, as well."

Perhaps we are getting closer to finding the root of Japan by studying its relationship with Buddhism, but it appears to me to be only a temporary tool we can use to catch a glimpse of this mystery, and Japanese religion is not the end-all-say-all point we must stop at. However, Buddhism is everything and is everywhere; it's statement of "impermanence" is just as much religious as it is scientific as it is artistic. There is no black and white, but the wide array of colors of the rainbow and all shades of grey. I believe Japan's greatest contribution to Buddhism is the application to all facets of life, Buddhist or not Buddhist.

How can anyone possibly write anything that is totally accurate to Buddhism?