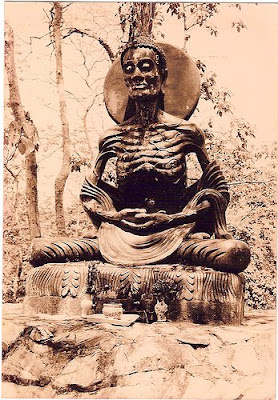 Here I will begin addressing topics specifically discussed in Carmen Blacker's book, "The Catalpa Bow: A Study of Shamanistic Practices in Japan."

This book covers a very broad subject in shamanism with a wide variety of investigations, but what I have been most interestested in is the ascetic practices in Japanese religion, and in this case, those done by the shaman. Generally speaking, a shaman is someone who has the special ability to communicate with realms of spirits that ordinary human beings cannot. Blacker shows us there are different means to this end:

"We shall find that two modes of entry into the sacred life are open to the medium and the ascetic in Japan. Either he is 'called', summoned by a deity in a dream or a possession to leave his old life and begin a new one, closer to the sacred world; or he may of his own volition, with no supernatural election or persuasion, decide that the life he has hitherto led is meaningless and insupportable, and that he must seek another kind of life for which new powers and gifts are needed. Whether the impulse comes from his own will, however, or from some apparently external spiritual being, whether he is what Hori calls the 'quest type' or the 'vocation type', he can only acquire the special powers he needs to bridge the gap between the two worlds by certain ascetic practices.

"These disciplines can be broadly classified into three: fasting, cold water and the recitation of words or power."

Here in this article, we will deal with the first of these ascetic gyou: fasting.

These practices interestingly enough derive from traditions in mainland Asia as they were brought with religious ideas. Nikudachi, or the abstention from meat, originates in Buddhism. And kokudachi, abstention from cereals, originates in Taoism. Blacker then begins to describe the diet adopted by fasting shaman, but makes no direct reference to influence from other foreign traditions. Perhaps here we may begin to see traditions adopted, but then modified to become peculiarly Japanese.

"To fill the gap left by the abstention from cereals there arose the practice known as mokujiki or tree-eating. Give up rice, wheat, millet and barley and you substitte nuts, berries, bark or pine needles. The title Mokujiki Shounin, Saint Tree-eater, has been applied to a number of ascetics since medieval times, its most celebrated bearer being the eighteenth-century carver of wooden images whose work, since its discovery in 1923 by Yanagi Souetsu, has achieved wide acclaim. Mokujiki Shounin died in 1810 at the age of ninety-three, having passed some fifty years of his life in continuous tree-eating. Thirty-eight of these years, moreover, were spent in constant travel on foot throughout Japan, in the course of which he left behind him at least a thousand carved wooden Buddhas. Many of these figures, with their characteristic archaic smile, have become prized collector's pieces."

Interestingly enough, this "tree-eating" diet was not just adopted and maintained as a practice, but was only a transitional means to a far more severe level of complete abstention.

"During the first part of the discipline their diet consisted of nuts, bark, fruit, berries, grass and sometimes soy in fair abundance. The quantity of these things was then reduced, until by the end of their allotted period they had undergone a total fast of many days."

So what is the reasoning for this practice? How does this facilitate a shaman's spiritual experience and abilities? Here's where it gets really interesting.

"Ideally, if the discipline were properly calculated, the man should die from starvation, upright in the lotus posture, on the last day of his avowed fast. His body should have been reduced to skin and bone, all flesh and visceral contents having long disappeared. He was then placed inside a wooden coffin, and buried underground in a stone sarcophagus for a period of three years. When exhumed at the end of this time he was found, if all had gone well, to have become a mummy. Such skin as remained on the body had not decomposed, but had desicated into the brown, scaly substance familiar to us from the mummies of the Egyptian tombs. Unlike the Egyptian mummies, however, no chemical embalming agents of any kind were used in this process."

Wow. Never before had I heard about such an extreme practice of fasting. But isn't it the logical end? If you fast, what's the point in marginal fasting instead of going straight for the final goal? This seems far more related to Hinduism, a belief-system that often describes the desire to "kill the body" in order for the spirit to become free. This seems to be far different than the "Middle Way" of Buddhism. But here, the Buddha is specifically cited within the fasting practices of Japanese ascetics.

"It was alleged ... that such people did not suffer death. What appeared to be death is in fact the state of suspended animation known as nyuujou, in which condition the soul may await the coming, millions of years hence, of the Future Buddha Maitreya."

Buddhism? Shinto? Shamanism? Hinduism? Taoism? From what established traditions to the Japanese shamans derive their beliefs and practices? From where do modern day Japanese derive their cultural beliefs and tendencies? Is this an "East vs. West" discussion? Hardly. Shamanism as a term and fasting as practice can be found in virtually all ancient, if not modern civilizations. How much does one's own individual experience contribute to all of this? Perhaps all of these religions are catalysts or tools adopted consciously or unconsciously by people in order to find their own selves, which they use sounds and words to best describe as "Buddha".
Posted by Zacky Chan at 3:29 PM