The Freedom of Capoeira 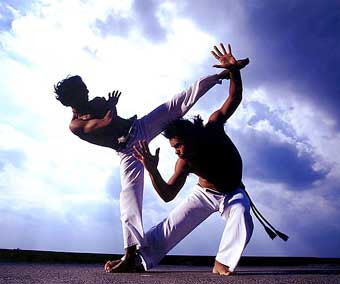 About one month ago, I was required to go to a two-day Mid-Year Seminar for my job as an English teacher where I along with the other ALTs (assistant language teacher, aka, English speaking dancing monkey) presented and watched various speeches and classes on teaching English in Japan. There were many informative and interesting bits, as well as boring and awkward ones, but perhaps the most interesting part of the whole seminar was an hour class that was given about capoeira, a Brazilian martial art. This hour class was in a list of other "fun" seminars at the end we got to choose from, and I jumped on this one immediately.
The class was taught by a man in his early thirties from Hawaii, who had lived in Brazil where he practiced capoeira. Somewhere along the way, he fell in love with a Japanese girl, and now lives here in Toyama where he has a kindergarten, and teaches capoeira classes. Because this was only an hour class to introduce capoeira to a bunch of English teaching gaijin and get them moving, we could do little more than just that, but it was very refreshing. I've never formally practiced capoeira, but in my hometown there are a few guys who like to play around with it, and I ended up joining them from time to time, so I had a leg up on most of the other people in the class because I had already been introduced to it.
Capoeira generally consists of a group of people that make a circle and clap to music while two capoeristas "spar" in the middle of the circle. The players move to the music for the most part, and base their movements off the ginga (back and forth movement characteristic to capoeira). Depending on what capoeira circle you're in (pun intended), there can be an emphasis on the dance aspect of the art or on the martial art side of things; or I guess ideally where both are given their appropriate emphasis. Our instructor described all of the movements in the guise of martial technique (you move here or are in this position because you want to attack/evade effectively, etc), but was sure to present capoeira as a fun game to enjoy. It sounded like a healthy balance to me. (If this article is your first experience with capoeira, I highly recommend you look up some information on the web and search some videos on youtube. If you have heard of this beautiful and strange art before, I highly recommend you look up some information on the web and search some videos on youtube.) 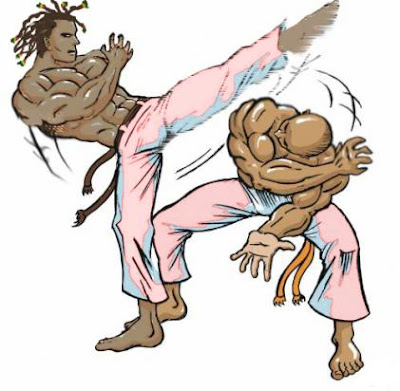 If I were to put my impression of this experience into one word, it would be: "refreshing."
The older I get, the more I realize how important physical movement is to my life. As a child, my favorite thing to do was run around in the woods. As a middle school and high school student, sports were arguably the single most important thing in my life. And ever since I first walked in a dojo at 17, my life has been arguably best enjoyed while practicing martial arts. In this latter more recent stage of martial arts, I've noticed that I've developed some very restrictive ideas concerning body movement. Emphasis is always made to further refine movement to be "most effective" (whatever that means exactly). In every movement, the finest of details concerning weight placement and angles and directions are investigated and adjusted to some "most effective" state, but in doing so, one can start designating all movements into "good" and "bad" categories. (I'm now remembering a huge epiphany I had when first practicing Hawaiian kenpo when my Sensei said that it wasn't a matter of "good and bad", but "good and better.") This session in capoeira greatly helped me to curb my movement-nazi tendencies, and just move. (This is pretty interesting considering my last post on where exactly the knee needs to always be in martial arts.)
In fact, this was a concept that the capoeira instructor used to describe the movements to us. He said that while practicing capoeira with a partner, the most important thing to do when an attack comes your way, is to get out of the way. That's it, it's easy! Just get out of the way. Amidst the ginga movement, if an opponent sends a kick your way, all you really have to do is step back; that's it! But as you can probably tell, that can be a bit boring. So if a partner sends a kick your way, instead of stepping back, you can crouch down, move to the side, or spin out of the way allowing you to counter-attack while your partner is exposed. THAT seems to be good capoeira. After hearing him explain this, and then show us some physical examples of how it worked, it flashed in front of me how capoeira really can be a legitimate fighting art, and one that contains a lot of the same characteristics as Hawaiian kenpo, and especially tai chi chuan, and aikido.
Does that sound strange? It did to me at that first moment of realization. After having a tiny amount of experience in capoeira maybe 7 years ago and practicing these various highly acclaimed far eastern martial arts, I found myself with a lot of judgements and reservations about capoeira that weren't necessarily true. Beware all of you practicing martial artists with your calculating investigative minds! We are ideally searching for some objective truth, not self-constructed delusion. 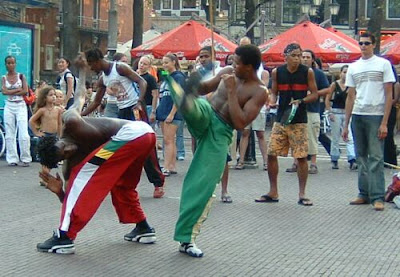 One remarkable characterstic I found to be similar between capoeira and these other martial arts I have practiced is the tendency to avoid meeting contact with contact. I think the benefits of this theory become especially obvious in capoeira because a lot of the attacks are momentum powered wide arching kicks; one of the most painful attacks to receive directly! To have one of these catch you on the side of the head would surely knock you out and send you to the ground at least! There are also many sweeps that would easily send you head over heels if they were not avoided. With a constant barrage of these kinds of attacks encountered in the capoeira ring, you would have to by necessity learn to avoid power, and like the instructor said, "get out of the way". One great parallel with this kind of competition is push hands practiced in tai chi chuan. One learns quickly it is a bad idea to try and fight back against a skilled push, and rather begins flowing with the push and directing it elsewhere, or becoming empty so the push really ends up pushing nothing. However, it would be hard to find a more different practice to capoeira than push hands, because push hands is often practiced with a fixed-step rule where stepping movement becomes incredibly limited, and you are mostly dealing with hand and arm attacks as opposed to mostly leg attacks in capoeira. While one practices honing one's physical movement to be as small and effective as possible in push hands, I feel it can turn you into a movement-nazi chaining you to the ground. Furthermore, I can't help but think of so many well-experienced martial artists who have practiced for a great many years, that would maybe have a really hard time just moving in the basic ginga movement.
Perhaps aikido works as a bridge between movement-inhibitied tai chi chuan and movement-excessive capoeira. In aikido we practice flowing with an opponent to avoid force on force interactions, but do so often with wide arching movements of the body. I often find myself in aikido asking questions pertaining to the exact angle or direction of a move, and receiving an ambiguous answer that decreases it's importance. Even in ukemi (rolling out of throws delivered by a partner), we are given specific directions on how to do so initially, but after a while, each of our bodies will automatically find their own ways to balance out all of the small unattended-to details performed by the joints and muscles (and mind?). Perhaps a lot of movement in aikido is "just getting out of the way". Also, there is a tendency in tai chi chuan to practice things very slowly and carefully, but in aikido, we move at the actual speed things would be executed the majority of the time. The same can be said in capoeira I think. Therefore, training sessions in aikido are vigorous and constant, which satisfies a lot of my personal preferences in the martial arts. This session I had in capoeira at the Mid Year Seminar took this freedom of movement a huge step further, and was refreshed to just move instead of critically examine everything so much.
Perhaps capoeira is more "natural" than aikido or tai chi chuan! I have grown so annoyed at the contradiction of practicing all of these movements that are supposed to be "natural", but having to spend so much time disciplining myself to remember them and program them into myself. In capoeira, it seems a lot of the smaller details of movement naturally fall into place as you are avoiding and delivering your attacks amidst the movement of ginga.
The capoeria seminar was delivered as simple and easy as well as difficult and complex. Anyone can play capoeira, but only those who practice constantly with strength will be any good. The session was accompanied by kids (the teacher's kindergarten students he brought to help), the music characteristic of capoeira, and with a lot of smiles and laughter. Right now I am putting all of my conscious effort into aikido, but I hope one day to be reacquainted with other arts such as capoeira, because it will help my study of budo, but even more importantly, make me happy.
To finish the class, the instructor ended with some capoeira philosophy that may be able to help us through the tribulations of real life: When met with adverisity, we can ginga out of anything. No matter what happens in life, we have the freedom to move as we like, be it getting out of the way by stepping back, or maybe utilizing some more tactful way. 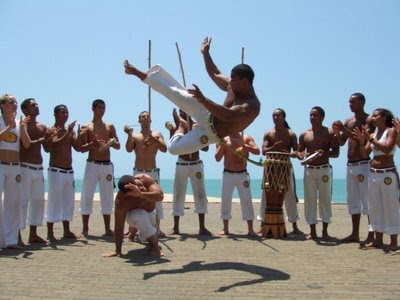